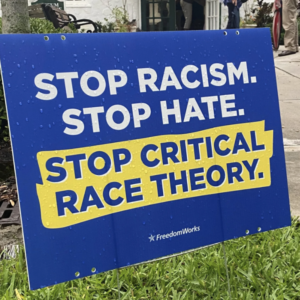 Opponents of the anti-discrimination language in the state budget Gov. Chris Sununu signed Friday are wrong when they use the phrase “divisive concepts” or claim HB 544 was part of the final legislation. But they’re right that the Granite State has directly entered the national debate over Critical Race Theory (CRT) and the use of its race-based ideology by government agencies such as schools and city governments.

According to an analysis by Vox, 27 state legislatures have introduced or passed laws intended to bar CRT from classrooms or diversity training programs.

The AP reports earlier this month, Florida’s State Board of Education passed a CRT ban which board members said would prevent educators from “teaching kids to hate their country.”

And Iowa Gov. Kim Reynolds signed a bill into law that bans teaching that the U.S. or Iowa is systemically racist or sexist. Like New Hampshire’s law, it would not ban educators from answering questions about those concepts or from discussing them as part of a larger lesson.

And while the Granite State law is relatively limited, it directly targets the premise of the CRT programs being pushed by progressives — that White people are all inherently racist, despite their behavior or beliefs, and they are propping up white supremacy when they support race-neutral public policy.

Nationally, supporting CRT is a losing issue for the Democrats, and continuing to defend it would likely put them in a tight spot. According to a recent poll from Fox News, nearly half of American voters, 41 percent, are unfamiliar with the divisive theory. However, those who know about it don’t like it. Only 37 percent of Americans who are familiar with CRT are in favor of teaching it in schools.

As NHJournal has reported, the new budget prohibits public employees from teaching or training that “an individual, by virtue of his or her age, sex, gender identity, sexual orientation, race, creed, color, marital status, familial status, mental or physical disability, religion, or national origin is inherently racist, sexist, or oppressive, whether consciously or unconsciously.”

House Majority Leader Jason Osborne (R-Auburn) praised the budget, including the anti-discrimination language, when Sununu signed it into law without fanfare Friday afternoon.

“We empowered families to find the best fit for their child’s educational needs, passed some needed reform to the governor’s emergency powers, and put an end to teaching the unfounded idea that an individual is inherently racist simply due to the color of their skin,” said Osborne.

1776 Action, a national organization that launched an ad campaign against CRT in New Hampshire, was pleased with the legislation’s passage.

“For some time, Critical Race Theory-inspired curriculum has been quietly on offense around the country – but the NH legislature just kicked it in the teeth,” the group said in a statement. “The language in the newly passed budget will go a long way towards ensuring that CRT finds no shelter in New Hampshire’s K-12 classrooms.

“While there is much more to be done, the next step is for school board members across the Granite State to make clear to parents that they stand with their legislature against CRT in favor of honest, patriotic education.”

New Hampshire Democrats claimed the law will prevent the teaching of American history, particularly America’s troubled past on slavery and civil rights for Black Americans.

In a press release, for example, New Hampshire House Democrats called the race-neutrality mandate in the budget “racist.” They argued that allowing the ideology banned by the bill would prevent discussions about American history and the pursuit of racial justice.

“Systematic racism is still alive and well, but rather engage with conversations head-on, supporters of this language would rather erase the legacy of discrimination and lived experiences of millions of Americans,” said Representative Linda Harriot-Gathright (D-Nashua).

And the top Democrat in the House, Rep. Renny Cushing (D-Hampton), said “it basically puts up a ‘Whites Only’ sign for the state of New Hampshire.”

But, supporters of the law ask, is it really necessary to label all White people as racist participants in an oppressive system of white supremacy, or all men as inherently sexist, in order to teach about history or justice?
The CRT issue has become a political flashpoint nationwide. In a recent trip to the Granite State, former Vice President Mike Pence blasted the Biden administration for supporting CRT and praised the state legislatures that are looking to stop the teaching of it.

“It is time for America to discard the left-wing myth of systemic racism once and for all. America is not a racist nation.”

Throughout the course of the legislation’s progress, Democrats in New Hampshire spent their time calling the anti-racism legislation “crazy pants town,” making factually-inaccurate claims about what the law actually says, and shaming an Arabic member of the General Court as a “disgrace to his race” for supporting the measure.