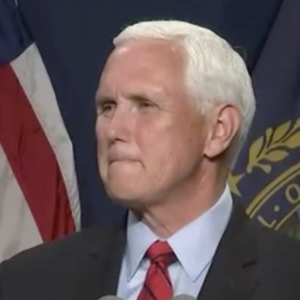 In what many political observers are calling the first overt campaign event of the 2024 presidential election, former Vice President Mike Pence told Hillsborough County Republicans the GOP’s top priority had to be unity in the face of the Democrats’ progressive agenda. And, Pence added, that unity had to breach the Republican divide over the events of January 6.

Pence spoke to a record-setting crowd for the county’s Lincoln-Reagan Awards fundraising dinner in Manchester, according to Hillsborough Chairman Chris Ager, who also serves as the state’s Republican National Committeeman.

“I think he delivered the messages that are core to New Hampshire, and I was very happy with his discussion about the ‘First of the Nation’ primary and the importance of it,” Ager said after the speech.

Pence was introduced by Gov. Chris Sununu, who earlier in the day told NHJournal he counted the former VP as a friend. “He was one of the first individuals who encouraged me to run for governor,” Sununu noted. And while Sununu has frequently been critical of DC politics in general and the Biden administration’s poor COVID communication with states in particular, he had nothing but praise for Pence.

“I can say without question and without hesitation, he was the central figure in the previous administration’s managing a lot of the pandemic. Frankly, he deserves a lot of the credit for what they got right.”

Sununu reiterated that message Thursday night, though, he said he didn’t want to just bash Joe Biden. When Pence took the platform, he picked up on Sununu’s remarks.

“The governor said he didn’t come here to bash the current administration,” Pence said with a pause. “Well, I did. So buckle up.”

Pence kicked off with a line he commonly uses to introduce himself: “I’m a Christian, a conservative and a Republican — in that order.” It’s an interesting pitch to a New Hampshire audience, one of the most secular states in the country.

Pence’s speech was an enthusiastically-received litany of hot-button topics for the GOP base. From Critical Race Theory (CRT) to defunding the police to H.R.1 — the For The People Act — Pence threw down on topics straight from the Fox News primetime line up. He sometimes sounded like a radio talk host, a job he once held in Indiana in the 1990s.

“It is past time for America to discard the left-wing myth of systemic racism,” Pence said. “I commend state legislators and governors across the country for banning Critical Race Theory from our schools.” New Hampshire’s GOP-controlled legislature is hoping to include such a law in the state budget.

“Let me say, as my friend [U.S. Senator] Tim Scott said to great effect: America is not a racist country,” Pence said. “America is the most just, righteous, noble, and inclusive nation that has ever existed on the face of the Earth.”

It was a big applause line, one of several standing ovations Pence received Thursday night. But when it comes to “inclusive,” what political observers wonder is whether the Trump-dominated GOP is prepared to include Pence.

After all, on January 6, Trump labeled his loyal vice president a traitor and a coward for not stopping the certification of the 2020 presidential election. Some members of the mob that ransacked the U.S. Capitol were specifically looking for Pence in the mistaken belief he had the power to overrule the Electoral College and send the election back to the states.

“Mike Pence didn’t have the courage to do what should have been done to protect our Country and our Constitution, giving States a chance to certify a corrected set of facts, not the fraudulent or inaccurate ones which they were asked to previously certify,” Trump tweeted at the time. “USA demands the truth!”

The result? Pence appears to be a politician without a base. His four years of unapologetic loyalty left him radioactive to post-Trump Republicans, while his role in January 6 hurts him with hardcore MAGA voters. Who’s left in the GOP primary?

Pence addressed the issue with a direct appeal for party unity.

“January 6 was a dark day in the history of the United States Capitol. Thanks to the swift action of the Capitol Police and federal law enforcement, violence was quelled. The Capitol was secured,” Pence said. “And that same day we reconvened the Congress and did our duty under the Constitution and the laws of the United States.

“You know, President Trump and I have spoken many times since we left office. And I don’t know if we’ll ever see eye to eye on that, but I will always be proud of what we accomplished for the American people over the last four years,” Pence said, bringing the crowd to its feet yet again.

“My fellow Republicans, for our country, for our future, for our children and our grandchildren, we must move forward. United,” Pence said.

Appealing to unity is an interesting strategy. It avoids asking people to take a stance on the behavior of either Pence or Trump, in favor of focusing on something you like even less. The jury is out on whether unity can entice enough voters to make Mike Pence a serious player in 2024, but NHGOP attendees said they liked what they heard.

State Rep. Will Infantine (R-Manchester) told NHJ0urnal Pence gave a solid speech. “He’s wonderful. I’ve met him before and he’s a good guy and he’s done a lot for the country.” Plus, Infantine added, “anyone who respects the New Hampshire primary…”

“His speech was forward-looking. It took apart what the current administration has done. He talked about what he and the previous administration had accomplished. And I think he’s right: Republicans need to stop talking to each other and start talking to the voters because that’s what matters.”

The size of the crowd was impressive for a county event, though opinions were split over whether it was support for Mike Pence or just the chance to get out and mingle for the first time since the COVID pandemic. The consensus was that it was a bit of both.

GOP Speaker of the House Sherman Packard liked what he heard. “It’s the first time I’ve heard him give a speech like that and he was terrific.”

Asked if Pence, a social conservative from the Midwest who spoke frequently about his faith, could find supporters in New Hampshire if he chose to run for president, Packard was optimistic.

“Looking at his record, as a member of Congress and a governor and vice president, there’s definitely a place for him in New Hampshire.”