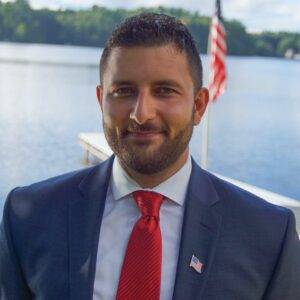 Progressive activists denounced an Arab American Republican state Rep. as a “disgrace” to his race for supporting an anti-racism bill during Wednesday’s House session.

The bill, HB 544, would prevent government employees and contractors from using “divisive content” based on the premise of racial or gender superiority, like Critical Race Theory (CRT). Several state school districts have made CRT part of their curricula, employee training, or both.

The House voted down an amendment to remove the language from the budget by just a seven-vote margin. One legislator supporting HB544 was state Rep. Daryl Abbas (R-Salem), chairman of the House Criminal Justice and Public Safety Committee. He spoke on the floor of the House about his family: His Italian Catholic mother and his Egyptian Muslim father; his Irish wife and his multi-racial son.

“If it were true, as Critical Race Theory insists, that White people are inherently racist, my family wouldn’t exist,” Abbas said. “And I’m not going to allow anyone to teach my son that this mother is racist because she’s White, but his father isn’t because he’s not.”

After the vote, Asma Elhuni of the progressive group Rights and Democracy NH denounced Abbas in harshly race-based terms:

“Rep. Abbas you are a disgrace to all Arabs. Do you deny systemic racism that plagues our community? Or is your power so far up your ass that dedication to a party will allow you to throw your people under the bus?” she tweeted.

Another member of the far-Left activist group, Derek Haddad, suggested Abbas is a sellout to his race. “There are an unfortunate number of Arab (and Latino) Republicans, who use their proximity to whiteness to gain money and power, ignoring the reality that white conservatives will only ever view them as their lackeys – or mistake them for their servants.”

To average Granite Staters not following the debate over CRT closely, this may sound harsh. But it’s typical of the language used by supporters of race-based social activism like Rights and Democracy. It could be heard at a 90-minute web event the organization held with two CRT activists the night before the vote (and can be viewed here).

After beginning the webinar with a “land acknowledgment” (“We are located on the land within N’dakinna, which is the traditional ancestral homeland of the Abenaki, Pennacook, and Wabanaki Peoples”), the presenters made their claims against HB 544. Their overarching argument is America and New Hampshire are plagued by “systemic racism,” a reflection of inherent racism in White people, and the “the racism that is present here [in New Hampshire] is real.”

One reason supporters of HB544 oppose CRT is its rejection of the idea of a “colorblind” society where race and ethnicity are not used to judge people. Panelists like Elhuni openly conceded that point. “So here we are in 2021, we’ve finally reached a place where people are realizing that this idea of being colorblind really doesn’t work,” she said.

Another CRT viewpoint opponents reject is the belief that people of color cannot engage in racism and that White people cannot be victims of it. Again, the panelists confirmed that critique.

Cathy Albisa, Vice President of Institutional and Sectoral Change at Race Forward, said HB 544 advocates are mistaken when they criticize CRT for being racist. “They try to reduce racism to an interpersonal level — what one person might feel about another, what one person might do in relation to another.

“Which makes it a lot easier to argue that White people can be victims of racism as well, which everyone here knows is utterly impossible.”

Why is it impossible? “Because racism is systemic,” Albisa said.

Albisa also said progressives oppose immigration enforcement because “it has racially inequitable outcomes.” Given that more than 95 percent of the people crossing the U.S. southern border illegally are from Mexico or Central America, that view makes any border enforcement impossible.

Another panelist spread misinformation about the recent Atlanta shooting, repeating the debunked claim that a Georgia law enforcement officer said the killer “was just having a bad day” as evidence of police attitudes towards people of color.

Kathleen Kim, who made the error, is Associate Dean of Equity & Inclusion and Professor of Law at Loyola Law School. She went on to describe police officers as “state actors who kill unarmed young Black men and women…with impunity.” And, she added, “there are laws that permit that, and permit the discretion of officers to perpetrate those kinds of harms on Black people.”

Adam Waldeck, president of 1776 Action, watched the webinar and described what he saw as “bizarre.” His group is organizing grassroots opposition here in New Hampshire to mandated CRT training and teaching the race-based theory in public schools.

“It is a window into the truly bizarre, discriminatory, and race and gender-obsessed society that the far left wants to force upon the rest of us,” Waldeck told NHJouranl. “It’s a complete rejection of our founding principle of equality under the law and of Martin Luther King, Jr.’s call to “judge a man not by the color of his skin, but by the content of his character.

“Parents across New Hampshire should watch this and ask themselves – is this the kind of stuff my children should be forced to ‘learn’ at school, funded with your tax dollars? Is this going to help them grow into happy, successful adults?”

Rep. Abbas said he was more sad than angry over the attacks directed at him and his Arab background.

“It’s unfortunate that when people disagree with them on this issue [CRT], they don’t try to persuade you, they just insult you,” he told NHJournal.

“I can tell [Elhuni] is angry but it would have been much more productive for her cause to have a conversation with me. We probably wouldn’t agree, but maybe we could have taken a step closer.”