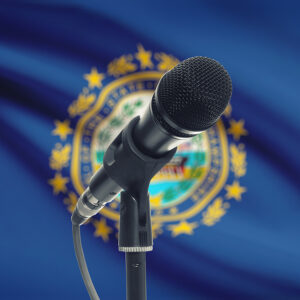 A ‘hot mic’ moment from a New Hampshire House committee hearing Monday gives a glimpse into the challenges awaiting the House Democratic Caucus’ next leader in the wake of the death of state Rep. Renny Cushing.

For months, Democrats have been making headlines as open warfare raged in their ranks amid accusations of racism and antisemitism. At the center of the conflict has been Rep. Nicole Klein Knight (D-Manchester), an outspoken progressive who has highlighted anti-semitic and anti-Israel rhetoric from some of her fellow Democrats.

She was also the topic of a conversation between Reps. Kendall Snow (D-Manchester) and Frances Nutter-Upham (D-Nashua) caught on a ‘hot mic’ Monday in the House Health, Human Services, and Elderly Affairs Committee.

During the conversation, Snow describes Klein Knight as a “weirdo.”

“She goes, ‘How about Christians give up hating Jews for Lent?’ I’m like ‘f*** that!’ Don’t take down my religion. Sorry for my French. But I was mad,” Nutter-Upham said.

Nutter-Upham also referenced the notorious incident during which Klein Knight repeatedly used the “n-word” in a State House conversation with a Black teen activist.

“I’ve never heard the end of the story about the young Black man that testified,” she said. The incident was investigated by the Speaker’s Advisory Group, which issued Klein Knight a “Letter of Caution” and suggested she had lied about what happened during the encounter.

Snow described how he tried to work with Klein Knight on legislation she proposed that would allow children as young as 12 to get psychiatric counseling without their parent’s knowledge or consent.

“I didn’t want to sound too negative, so I said, ‘Let’s think about this. Maybe if you made this bill more comparable to the participation of minors bill, it took a little older age,’ and she just went off on me,” Snow said.

“Yeah, you disagree with her and she goes off on you.”

In a statement to NHJournal, Klein Knight said she is “very disturbed and offended by my colleagues’ on record lack of decorum.”

“Unlike my two colleagues in this video, I typically call someone or have a private conversation with them about a piece of legislation or how they communicate,” Klein Knight said, “This way if there is a misunderstanding, we both have the space to clear up the confusion. I have always tried to show respect and give people the benefit of the doubt. It is unfortunate that the same courtesy is not extended to me.”

The ongoing conflict inside the Democratic caucus has its roots in antisemitic social media posts by progressive Rep. Maria Perez (D-Milford), and the refusal of Klein Knight to allow her caucus to overlook them. Perez was eventually punished, but many members of the Black, Indigenous, and People of Color (BIPOC) faction of the state’s progressive movement were unhappy.

When Klein Knight when on her bizarre, “N-bomb” laced rant, the progressives pounced. They released a public letter and demanded Klein Knight be held accountable. She was kicked out of the House Progressive Caucus and she was stripped of her committee assignments by House Democratic leadership.

While even her supporters acknowledge Klein Knight’s behavior has been erratic at times, there are still House members who believe she’s been treated unfairly by progressives. They have urged fellow Democrats to extend due process to her, and they have confirmed her accusations of antisemitism in the House Democratic caucus.

“I wanted to know the situation my colleague faced when she said the word,” Rep. Rosemarie Rung (D-Merrimack) wrote in defense of Klein Knight last month. “She had been under immense stress from antisemitism and felt threatened by others because she is Jewish. Some of her colleagues, including me, were concerned for her mental health.”

NHJournal repeatedly reached out to Reps. Nutter-Upham and Snow for comment. They did not respond. Acting Minority Leader Cote also declined to comment on the video or its contents.