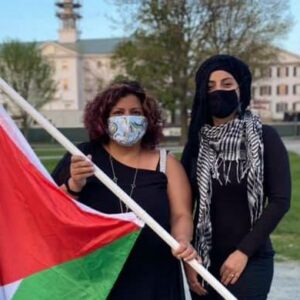 “Representative Maria Perez tweeted an anti-Semitic phrase commonly used as a slogan by terrorist organizations,” House Democratic Leader Renny Cushing (Hampton) acknowledged in a letter to Speaker Sherman Packard (R-Londonderry). The slogan is “From the river to the sea, Palestine must be free,” used by the Iranian-backed Hamas terrorist organization to call for the destruction of Israel. Perez posted the statement on October 23. NHJournal first wrote about it on October 28.

Perez responded to the NHJournal’s coverage with another antisemitic attack on Israel, calling it “an apartheid state.” She eventually offered a semi-apology for using the “River to the sea” slogan, claiming she didn’t fully understand its meaning. But she has not retracted or apologized for her “apartheid state” statement.

While the Jewish Federation of New Hampshire and the Anti-Defamation League immediately condemned Perez’s behavior, no Granite State Democrat has commented until now.

“Sadly, the anti-Semitism we have seen in the House is only a microcosm of the discrimination that Jewish people endure on a daily basis,” Cushing wrote. “Over the last two weeks, I have had numerous conversations with House members about anti-Semitism. These conversations have provided me a stronger understanding of the phrase repeated by Representative Perez, and of the need to speak forcefully and unequivocally whenever a member promotes hate and violence in their capacity as an elected official.”

The New Hampshire House Progressive Caucus, where Perez serves on the executive board, also released a statement Friday morning:

“Recent online post of a radical antisemitic slogan by a fellow caucus member has caused the NH House Progressive Caucus to take a stand against this type of hate speech. The use of antisemitic slogans or words are both hurtful and dangerous and must be condemned by all.”

They also announced she’s being forced out of her leadership position.

“Even though Rep. Maria Perez has felt remorse and apologized for the use of such a slogan, effective immediately, she will be stepping down from her position on the Progressive Caucus Executive Board.”

Neither House Democratic leadership nor the Progressive Caucus mentioned Perez’s “apartheid state” attack on Israel, which has been labeled an antisemitic slur by Jewish Democrats in Congress, among others. It’s also been rejected by the Anti-Defamation League.

Antisemitic and anti-Israel sentiment is common among the progressive movement, and Democrats have been reluctant to call it out. After U.S. Rep. Ilhan Omar (D-Minn.) was condemned by Jewish Democrats for her repeated use of antisemitic tropes, Democrats forced House leaders to abandon a condemnation of antisemitism and instead pass a resolution condemning racism and hated in general.

Just a few months later, Omar was a featured speaker at a New Hamshire statewide fundraising event in Manchester.

Democrats point to antisemitic social posts by two Republican legislators, Reps. Dawn Johnson (Laconia) and James Spillane (Deerfield). Both apologized and Spillane was admonished by the House for his post.