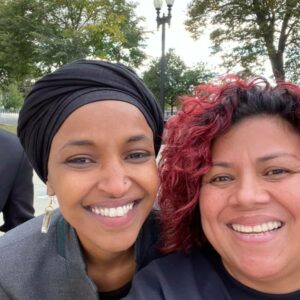 “From the river to the sea, Palestine will be free!” Perez tweeted, a reference to the Jordan River and the Mediterranean Sea. In between lies the nation of Israel, making the chant — common among supporters of Iran and the Hamas terror organization — a call for the destruction of Israel. 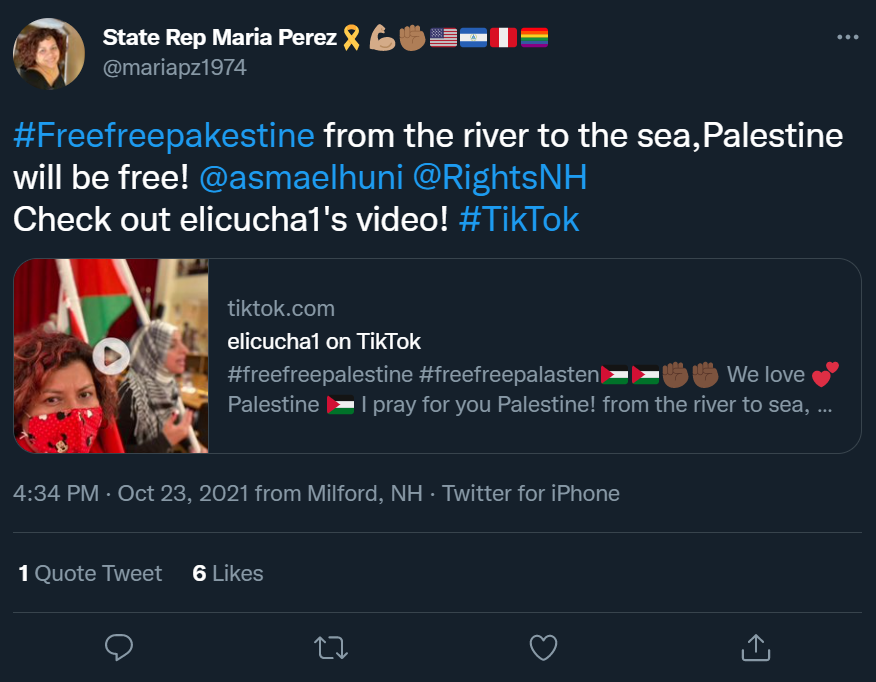 “I am very concerned that Rep. Perez has made such a declaration and I hope she will study some history to understand the natural, historical, and rightful claim to the land of Israel by the Jewish people,” said Rep. Judy Aron (R-South Acworth). It is my hope that both sides of the current conflict can find a peaceful resolution and comments like hers do not further that goal.”

After questions about the post were raised in New Hampshire political circles, Perez apparently deleted it.

“Those calling for ‘from the river to the sea’ are calling for an end to the State of Israel,” said Sharon Nazarian, the Anti-Defamation League’s senior vice president for international affairs, after a liberal CNN commentator used the phrase in a speech. The commentator, Marc Lamont Hill, later apologized.

Like many of her fellow New Hampshire Democrats, Perez is a supporter of Rep. Ilhan Omar (D-Minn.) whose repeated antisemitic remarks have been so egregious, she’s been called out for comments her fellow Democrats describe as “vile, antisemitic slurs.”

It’s not just Perez. Even after her repeated antisemitic and anti-Israel comments, Omar was still a featured speaker at the Granite State Awards fundraiser for New Hampshire Democrats leading up to the First In The Nation primary last year.

There’s an eerie silence from Granite State Democrats about the antisemitism in their own ranks. That’s a very different stance from the party’s repeated criticism of Republican Reps. Dawn Johnson and James Spillane over posts of antisemitic content on social media. In both these cases, the representatives said they were unaware of the content and its meaning.

Whether or not that’s true, Spillane received an “informal resolution” of a complaint and apologized for his post. Johnson, who’s currently running for mayor of Laconia, also apologized.

Will Democratic House leadership call on Perez to apologize? Will Perez make a statement? She declined to do so when NHJournal reached her.

The antisemitism in progressive ranks is well-established. When Israel defended itself from rocket attacks by the terrorist organization Hamas earlier this year, the New Hampshire Progressive Coalition sided with the terrorists.

Just last week, the Washington, D.C. chapter of the influential green organization, the Sunrise Movement, called for the removal of three Jewish advocacy groups from a voting rights rally. Sunrise chapters around the country quickly denounced the antisemitic statements — for which Sunrise Movement members later apologized.

But the Dartmouth Sunrise chapter declined to respond to repeated requests for comment.

Asked why there is so much openly anti-Jewish sentiment being expressed across the political aisle, Aron said, “I have no explanation. It baffles me.”