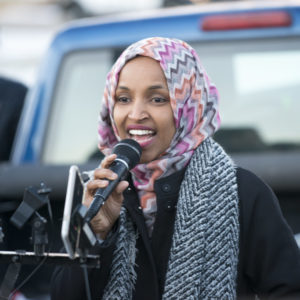 One of the speakers scheduled to appear at a New Hampshire Young Democrats event in Manchester Friday night is best known for speaking out about Israel, foreign policy and the Jews. And not in a good way.

For reasons unknown — the NH Young Democrats have declined multiple requests for comment — notorious Minnesota Rep. Ilhan Omar will be one of the keynote speakers at their Granite Slate Awards event, campaigning on behalf of fellow progressive Sen. Bernie Sanders.

Omar has been a member of Congress for less than two years, and already she’s been pressured into making repeated public apologies for comments her fellow Democrats describe as “vile, anti-Semitic slurs.” Her insults toward Jews have been so offensive that House Democrats drafted a resolution condemning her anti-Semitism specifically, until pressure from progressives inside her party forced Speaker Nancy Pelosi to replace it with a watered-down version condemning hate in general.

“While we commend Speaker Nancy Pelosi’s decision to bring to the floor the issue of anti-Semitism within its ranks, the politically expedient resolution failed to call out Representative Omar by name,” the Simon Wiesenthal Center said in a statement afterward.

“This accusation that Jews have a dual loyalty or require people to pledge allegiance to a foreign power, it is an anti-Semitic charge that has been used against the Jewish people literally for hundreds of years, long before there was a state of Israel,” said Anti-Defamation League CEO Jonathan Greenblatt.

And just weeks ago, Omar was embroiled in another controversy over a tweet that appeared to imply businessman Leon Cooperman’s support for presidential candidate Mike Bloomberg is based on the fact that they’re both Jewish.

Now, thanks to the New Hampshire Young Democrats and Senator Sanders, young Granite State progressives will get to hear Omar’s sparkling insights, up close and personal, in Manchester.

Sanders’ willingness to embrace progressives with anti-Israel, and sometimes anti-Semitic, views is not new. Just days ago, he was forced to fire a new staffer when his anti-Semitic tweets about “Jew money” were discovered, and several members of Sanders’ senior staff have been embroiled in controversies regarding Israel and anti-Semitism.

“Bernie Sanders should know better: Omar’s anti-Semitic and insensitive language does not reflect the values of Granite Staters, or the vast majority of Americans.  Bernie and Omar’s shared socialist pipe dream is sure to further solidify Granite Staters support for President Trump and Republicans across the state,” Republican National Committee Spokesperson Nina McLaughlin told NHJournal.

So why are the NH Young Democrats embracing a divisive figure like Omar? It certainly doesn’t fit in with their mission as New Hampshire’s official chapter of the Young Democrats of America.

“Our membership reflects the broad diversity of our nation and the Democratic Party,” the organization claims. “Acceptance of diverse viewpoints is fundamental to a well-functioning democracy.”

The YDA’s platform even includes a declaration on behalf of “Israel’s right to exist as a Jewish Democratic state,” which is ironic given the number of events Rep. Omar has attended with crowds shouting, “From the river to the sea, Palestine will be free” — a not-so-subtle call for the destruction of Israel.

The NH Young Democrats have offered no explanation of how Rep. Omar’s standing as an outspoken opponent of Israel fits in with the values of this local Democratic organization. And no elected NH Democratic officials have spoken out publicly about Omar’s attendance at the Granite Slate Awards. In fact, NH Senate Majority Leader (and 2020 candidate for governor) Sen. Dan Feltes sent out an email Wednesday urging Granite State Democrats to “get your tickets now” for the event.

In March, when the House was debating Omar’s anti-Semitic comments, not one of New Hampshire’s four Democratic members of Congress would condemn her offensive remarks. Several members of the Granite State’s Jewish community did speak out, however.

“I think Omar’s comments were anti-Semitic and I think they were unacceptable,” former N.H. Congressman Paul Hodes told NHJournal. “Had I been a member of Congress, I think –I hope– that I would have been clear in rejecting anti-Semitic comments and holding the speaker accountable.” Hodes was the first Jewish member of the House of Representatives elected from New Hampshire.

Rabbi Boaz D. Heilman of Temple B’nai Israel in Laconia, N.H. was more direct: “All I can say is that Rep. Omar’s comments were anti-Semitic, and that silence is wrong.”