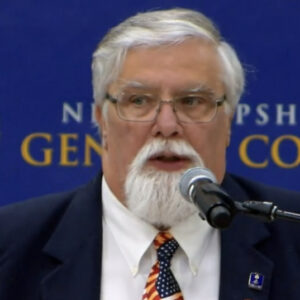 Speaker of the House Sherman Packard says it’s “the most conservative budget we’ve produced in the past 50 years.”

And if the House GOP leadership can’t hold enough votes in their slim 212-186 majority, a budget that cuts spending, cuts taxes, limits the governor’s emergency powers and bans late-term abortions could die at the hands of their own party.

During an exclusive interview with NHJournal, Packard and House Majority Leader Jason Osborne (R-Auburn) made their case for a budget that supporters describe as a treasure trove of conservative policies Republicans have long struggled to enact.

“We’ve been talking for almost as long as I’ve been in the legislature about phasing out the interest and dividends income tax over a five-year period,” Packard said. “That is going to help a lot of people who are retired and living off [their savings] actually stay in the state of New Hampshire.”

In fact, Packard claimed, “We’re giving help to just about every segment of society. We’re giving property tax reductions, helping people maintain their incomes and their way of life. I don’t remember the last time we had a budget that was so helpful to so many citizens.”

Democrats are unanimous in their opposition, decrying the tax cuts and rejecting any limits on abortion up to the day of birth.

“Our House and Senate Republican colleagues came to an agreement on a budget that not only fails to meet the needs of the vast majority of hardworking Granite Staters but it is also being used as a vehicle for an extremist policy agenda that we should all find alarming,” said Sen. Cindy Rosenwald (D-Nashua).

And Sen. Lou D’Allesandro (D-Manchester) condemned the cuts in business tax rates. “The tax cuts pushed by Senate Republicans today were like watching Robin Hood in reverse. Each cut steals from the poor in order to give more to the rich.”

In fact, state revenues have risen every year the Republicans have lowered these taxes since 2015.

“In the past, we’ve cut maybe one tax at a time. And each time it’s been a big deal, something that made headlines. But this year, we proposed going through and cut every single tax we could find, so no one could complain, ‘Oh, well, these corporations are getting tax relief but property taxpayers are not.’

“Well, you know what? We’re giving a lot more property tax relief than we are corporate tax relief,” Osborne said.

But it’s not fiscal issues that are endangering this budget. Republican holdouts say the budget doesn’t do enough to restrict the power of governors to extend states of emergency, or to keep race-based Critical Race Theory-inspired rhetoric out of government institutions.

On the issue of executive power and states of emergency, Osborne said he would have preferred to see Gov. Chris Sununu leading on the issue rather than fighting with the legislature. At the same time, “the emergency just ended. We’re just coming out of it. You can’t expect to see him get out front on the next [emergency] when we’re still in this one,” Osborne conceded.

“I fully expect him to be leading on this issue in the future. He a very reasonable chap.”

“If there are a hundred executive orders out there and 99 of them are good, but one of them isn’t, you need to do something about that,” Osborne said.

Drew Cline of the Josiah Bartlett Center for Public Policy compares it to “a line-item veto for a state of emergency.”

The governor would also be required to call a session of the legislature after 90 days to vote on whether to end the state of emergency. Freedom Caucus opponents want to reverse this and require an affirmative vote for the emergency to continue. Otherwise, they argue, the emergency becomes the default position. “The full legislature needs to have a vote on whether to continue a state of emergency. If they don’t vote that way, it needs to end,” wrote Andrew J. Manuse of ReOpenNH.

Packard and Osborne insist this conversation isn’t over, even if the budget is passed. “That’s how the legislative process works. We keep talking, we keep working on it.”

The same is true with the anti-discrimination language in the budget, said Packard. The budget bans government employees from declaring people inferior or superior or racist or sexist etc. based solely on
“inherent” characteristics like the color of their skin or sex.

Given that the fundamental principle of Critical Race Theory is that all White people are racists and advance white supremacy regardless of their beliefs or behavior, CRT would, for all practical purposes, be banned.

However, Packard said, more legislation addressing the spread of race-based teaching and training is on the way. “We’re already planning on coming back and making some modifications or adding some language,” Packard said. “I’ve talked with the Majority Leader and with the sponsor, Rep. [Keith] Ammon. We’re going to be working on a bill filing in September.”

“The idea that every White person is a racist is abhorrent to me. That’s not the case, and it shouldn’t be taught in our schools.”

But all this is moot if Republicans lose more than 13 votes to the opposition, a fact that was clearly front of mind for the two leaders.

Asked what the biggest issue is that they’re still working on, Osborne said simply: “We need more Republicans.”