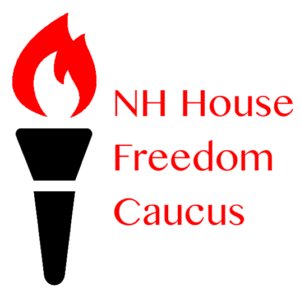 House Freedom Caucus to Leadership: ‘This Budget is D.O.A.’

[This story has been updated with comments from House Majority Leader Rep. Jason Osborne (R-Auburn.)

You can’t say you weren’t warned.

That was the message from members of the New Hampshire House Freedom Caucus who tell NHJournal they are prepared to vote against the state budget proposal being pushed by their fellow Republicans. And despite reports that the sticking point is the Sununu-backed family medical leave proposal, the HFC says it’s all about limiting the governor’s unilateral emergency order powers.

“I worked very hard to make sure everybody knew this was our line in the sand,” Rep. Andrew Prout (R-Hudson) told NHJournal Wednesday. “We didn’t want anyone to be surprised.”

The budget process, which appeared to have handled high-profile issues like the 24-week abortion ban and the “divisive language” issue, has slowed dramatically in the past few days. A scheduled joint appearance by Speaker Sherman Packard (R-Londonderry) and Senate President Chuck Morse (R-Salem) was suddenly called off without explanation.

“Things are very volatile right now,” a source close to the negotiations told NHJournal. And with the NHGOP’s majority down to a 212 – 186 margin, a dozen GOP votes could kill the budget.

Late Wednesday night, House Majority Leader Jason Osborne (R-Auburn) told NHJournal he believes a deal is possible. “As of this moment, we still have more than fifteen hours before the reporting deadline. It is way too early for anyone to be making statements about this budget. As always, I remain confident that we will deliver a product for Granite Staters to be proud of.”

Freedom Caucus members argue the executive powers issue is a top priority for many of their constituents and is essential to restoring balance between the two branches of government. They reject the current plan, which would require a vote by both chambers of the legislature to end an emergency declared by a governor. They want the governor to be able to declare an emergency when needed, but the emergency would end after a set period unless the legislature affirmatively voted to extend it.

“When it comes to emergency powers, this shouldn’t be a Republican or Democratic issue,” said Rep. Barbara Comtois (R-Barnstead). “And when you see that the House version passed on a bipartisan basis with 328 votes, I think it shows we’re the ones who’ve gotten [the issue] right.”

Establishment Republicans have quietly insisted for weeks that the Freedom Caucus members wouldn’t be able to walk away from this budget, one that features tax cuts, real spending cuts, deregulation, and the 24-week abortion limitation.

“This is the best budget I’ve ever worked on, and I’ve worked on a lot of them,” Morse said.

Prout says it’s not good enough, that putting the legislature into the emergency powers process is not negotiable.

“If we’re going to back this budget, it has to be one that doesn’t allow unbridled executive power to just continue, without the consent of the legislature,” Prout said. “It can’t be ‘the governor can do what he wants until both chambers say no.’ It has to be ‘the emergency order is only extended if both bodies say yes.'”

In a statement from the caucus, Rep. Mark Warden (R-Manchester) said, “When the citizens elected us in November of 2020, they expected meaningful reform to the State of Emergency statutes that impacted Manchester businesses so severely. Increasing the time that the executive branch has complete control of the state not only breaks the promises that we made when we ran for office, it actually harms the citizens that we work for.”

Are these Republicans really prepared to kill this budget?

And Prout offered this history lesson: “Nobody thought the budget in 2017 was going to go down, either.”