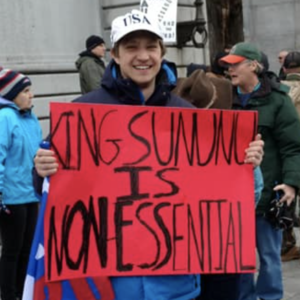 I think it’s a bit naive to think that once Pandora’s box has been opened and we’ve seen a governor use unlimited and unchecked power for 15 months that no governor is ever going to come up with a reason to call a State of Emergency in the future, if not the near future.

Politicians love power and they love their own ideas, which is why they need to be checked by co-equal branches of government that stop any one branch from taking control of the state. Our country was founded during a pandemic, and our state constitution spelled out at that time that the Legislature was the body responsible for passing laws, even during emergency situations, and not the governor. But this governor passed his emergency orders under the color of law that led to lost livelihoods, lost lives, and psychological trauma that we may never fully recover from, and he is fully responsible for that.

Never was such a scenario even a conception in the minds of our founders, except that they had just thrown off the exact same type of government that was run by King George III and they believed the constitutions they crafted would prevent such a government from emerging again. As Ben Franklin said, the founders had given us a republic, if we could keep it. In the last year, we didn’t keep it, and even after the end of the State of Emergency, we are still in a constitutional crisis if we don’t take the present opportunity to fix the laws that allowed the governor to abuse his power.

I’m not sure if you are aware, but leftists across the country are already setting us up for the next potential public health emergency, and I bet you can’t guess the next object of “crisis.” The American Public Health Association has already declared that “gun violence is a major public health problem.” They’re not the only ones, either. Could you imagine what leftist governors would do if they could levy the same propaganda that was used during the COVID-19 “emergency” for this trumped up cause?” What other crisis might be construed as rationale to declare a State of Emergency? What about a climate crisis? The University of Southern California is already beating the drums that “a climate crisis is a public health crisis.” We need to have this discussion now. We need to put protections in place to prevent it from happening again–now!

Unfortunately, the House solution to this problem that ReopenNH fully backed that would have solved the problem was sabotaged by the governor-controlled Senate at the last minute, and therein lies the root of our problem today as the soon-to-be-defeated budget vote looms with less than a week to go. There’s still time for parliamentary maneuvers to fix this; that is, if the Legislature has the political will to serve the people of the state and not continue to obey this out-of-control governor. It’s time for this governor to compromise, maybe just a little bit, instead of just pretending to compromise behind his team of attorney saboteurs.

The House version of the emergency powers reform would have addressed the serious issues, and it certainly is something that would have carried this budget over the finish line, or at least garnered our full support. What it did was insist that the govenor had 30 days (we’d prefer 21) to declare a State of Emergency and do whatever he needed to do to get things under control. After that, the Legislature would have to meet to vote to extend the emergency.

If the situation was dire and we were living under an actual emergency, I can’t imagine a single lawmaker not voting to extend the emergency for another month. If the situation was tenuous, as it was under this emergency, then the governor had better make a good case defending his need for extraordinary powers to work outside state laws. If he can deliver information to the Legislature that proved his case, then they most assuredly would vote to continue the State of Emergency for another 30 days. However, if he didn’t make a good case and was just trying to hold onto power for his own benefit, as this governor did, then just one body of the Legislature could say “no,” we’re not going to extend these powers to you again, and the emergency would end. That’s the way it should be.

The natural state of our government is a constitutional republic, in that we have a Legislature that passes laws, a governor that enforces those laws (and follows them), and a court that interprets how those laws function in individual circumstances.

A State of Emergency gives the governor extraordinary powers for what is intended to be a short time period. Because of this, the Legislature that constitutionally has the power to pass laws, especially during emergency situations, ought to decide whether they want to empower the governor to have these extraordinary powers for a limited period of 30 days. If the majority of the House and the majority of the Senate don’t together believe that the governor needs these powers anymore, then the governor should not have them. Even if the House thinks the powers should continue and the Senate doesn’t, the powers should end, because again, the powers are an extraordinary situation and the status quo form of government should always be the default to protect the people’s liberty.

In other words, the full Legislature needs to have a vote on whether to continue a state of emergency. If they don’t vote that way, it needs to end.

Unfortunately, Sen. Jeb Bradley flipped this logic on its head, and said that both bodies should have to vote together to end a State of Emergency, which makes the State of Emergency the default position of the way our government functions, just at the whim of the governor. By doing this, he essentially devalued the entire emergency powers reform effort and left us in the same place we started.  With this logic, a governor in league with the leader of either the House or the Senate could continue a State of Emergency indefinitely, forever changing our constitutional republic into a different form of government, denying the people their right to life, liberty, and property without any checks and balances.

This is wrong and it cannot stand. It needs to be fixed, and now is the time.

The Senate insists on not addressing the fundamental problem with what just happened to the state over the past 15 months. They’re going to have to bend if they want a budget. Unless the default form of our government is a constitutional republic, we don’t have a deal.

Andrew J. Manuse is chairman of RebuildNH. He wrote this for NHJournal.com.