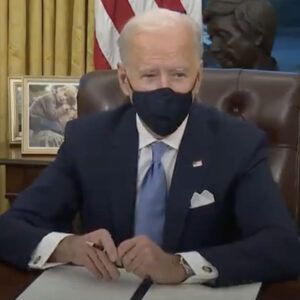 Sununu vs Hassan on Biden COVID Spending. Who’s Right? The Answer May Surprise You.

Gov. Chris Sununu and Granite State Democrats have been debating for days over how the Biden administration’s COVID-19 spending plan impacts New Hampshire. The GOP governor says the formula is unfair and punishes well-run states like New Hampshire while rewarding California and New York with “blue state bailouts.” According to the Republican Governor’s Association, New Hampshire is losing $233 million under the Biden formula.

Democrats like Sen. Maggie Hassan reply the Granite State will be one of the big winners, getting more money than most states, and collecting more under this plan than in last year’s CARES Act.

Who’s right? According to an analysis by NHJournal, they both are.

On the eve of last Friday’s House vote, Sununu told NHJournal he would not vote for the Democrats’ $1.9 trillion package because it used a formula to calculate aid that gave more money to states with higher unemployment, rather than a flat per-capita payment. “When you look at what states are going to reap the financial benefits of this bill,  frankly, they are the worst managed,” Sununu said. “Their unemployment has skyrocketed, and they’re going to get more money than everybody else.”

New Hampshire’s two House members ignored his advice and joined all but two Democrats — and no Republicans — to narrowly pass the bill and send it on to the Senate. “It will strengthen our vaccination efforts, get more direct aid in the pockets of families and individuals who are struggling, and support cities, states, and counties to ensure that vital services and support continued,” Rep. Chris Pappas said.

On Monday, Sununu joined a bipartisan group of governors across the country criticizing the funding formula used to allocate direct state funding.

“Unlike all previous federal funding packages, the new stimulus proposal allocates aid based on a state’s unemployed population rather than its actual population, which punishes states that took a measured approach to the pandemic and entered the crisis with healthy state budgets and strong economies,” their joint statement said. “A state’s ability to keep businesses open and people employed should not be a penalizing factor when distributing funds. If Congress is going to provide aid to states, it should be on an equitable population basis.”

NH Democrats dismissed the complaints, using social media to send out a Reuters analysis showing New Hampshire ranks 12th in per capita payments and will be receiving more money per person than in the CARES Act package. Sen. Maggie Hassen referenced these same numbers during an interview on Jack Heath’s radio show Tuesday morning.

A few minutes later as a guest on the same show, Sununu pushed back, arguing “It’s not the number, it’s about what’s fair.”

“The CARESAact was a whole separate bill from a year ago, right? So you’re kind of comparing apples and oranges,” Sununu said. “Could we potentially get more money? The state wouldn’t, but cities and towns may, so sure.” Sununu said. “It’s still not fair in terms of what New Hampshire taxpayers have to pay and what they’re getting back. And I think every person in this country, whether you’re from a red state or a blue state, should be treated exactly the same.”

And, Sununu added, “why should [states like New Hampshire] be bailing out Andrew Cuomo and Gavin Newsom? That makes no sense to anybody.”

But does this math make sense to anybody? Here are the numbers:

In the Biden COVID-19 package, also known as the “American Rescue Plan,” $350 billion is being allocated to the states, far more than the $150 billion in the CARES Act, which was signed into law by President Trump in March of 2020. So when Hassan and her fellow Democrats say the state will collect more, they’re right. If the bill is signed into law as currently written, New Hampshire will receive $1,115 per resident in federal aid, as opposed to $915 per resident under the CARES Act.

And yet, those numbers also back the fundamental criticism from Sununu and his fellow governors. The overall state aid in the new plan is more than double the CARES Act, but New Hampshire’s per person share is only 22 percent higher. Because the Granite State kept unemployment lower, its share of aid decreased.

Sununu is correct in saying states like California and New York benefit more from the change in the funding formula. Because Biden’s bill changed the formula, California and New York, which have significantly higher unemployment and poverty levels than New Hampshire, are receiving $5.4 billion and $2.2 billion more respectively, while New Hampshire is receiving $233 million less.

Taylor Caswell, executive director of the Governor’s Office for Emergency Relief and Recovery, told the Union-Leader: “While states like California and Illinois see a 270 percent increase in money per capita, New Hampshire only sees a slight 20 percent bump.”

As Greg Moore of Americans For Prosperity-NH tweeted: “That NH could get one of the highest per capita bailout funds & yet still be getting jobbed by $233M shows just how much this bill is in the tank for CA, NY & NJ. Sen. Schumer and Speaker Pelosi are bringing home the pork for their states, everybody else gets crumbs.”