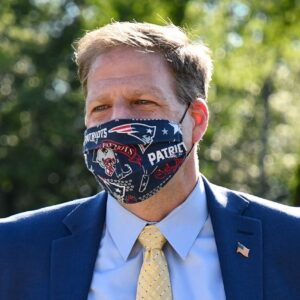 “Unlike all previous federal funding packages, the new stimulus proposal allocates aid based on a state’s unemployed population rather than its actual population, which punishes states that took a measured approach to the pandemic and entered the crisis with healthy state budgets and strong economies,” their joint statement said. “A state’s ability to keep businesses open and people employed should not be a penalizing factor when distributing funds. If Congress is going to provide aid to states, it should be on an equitable population basis.”

Around 2 a.m. Saturday, the House of Representatives approved Biden’s $1.9 trillion plan without a single Republican vote and two Democrats voting no.

“The passage of this bill would send the unmistakable message that Washington politicians expect New Hampshire taxpayers to subsidize poorly run, cash-strapped states,” said Sununu. “While California, New York, and New Jersey make out like bandits with billions of dollars in increased funding, New Hampshire’s taxpayers are left to foot the bill. This is outrageous, and a complete betrayal from previously written funding bills,” Sununu said Saturday.

“I am genuinely disappointed in Congresswoman Kuster and Congressman Pappas for their votes today, and I call on Sens. Shaheen and Hassan to immediately oppose this bail-out.”

As NHJournal previously reported, the Biden spending plan passed by the House changes how direct aid to states is distributed. In previous COVID bills, the amount of direct funding going to individual states was tied to population. But as Rep Jason Smith (R-Mo.) ranking member of the House Budget Committee noted, “In their partisan $1.9 trillion bailout package, Democrats have changed that formula by adding unemployment as a factor. The impact: those states run by the Democrat majority’s political allies disproportionately benefit from an increase in funding.”

Under this new formula, New Hampshire is set to lose $233 million, while California and New York will gain $5.4 billion and $2.1 billion in federal funding respectively. And according to an analysis by NHJournal,  states that voted for Biden in the 2020 election would gain $9.2 billion from the new funding formula, while states that voted for former Pres. Donald Trump will lose a similar amount.

Asked about this approach by NHJournal during Thursday’s COVID-19 presser, Sununu called out the legislation for rewarding poorly-managed states with additional federal money.

“They’re going to [distribute state aid] in a very unfair way, with states that were poorly managed and where unemployment is still skyrocketing, they’re going to get more money than everybody else,” Sununu said. “That’s inherently inequitable, it’s inherently unfair. And again, I’ve heard Democrat governors also raise those concerns that this is an unfair process.”

“Our nation still faces an urgent crisis and this legislation addresses the scope and scale of the challenges before us,” Pappas said in a statement. “That’s why I voted today for this COVID-19 relief package to strengthen our vaccination efforts, get more direct aid in the pockets of families and individuals who are struggling, and support cities, states, and counties to ensure that vital services and support continue.”

“The American Rescue Plan Act will provide critical resources for our NH communities to build back from this pandemic,” Kuster said, without noting those communities will be receiving less money per capita than in Massachusetts and New York.

“Governor Sununu hit the nail on the head,” RGA Spokesperson Chris Gustafson told NHJournal. “Joe Biden and Washington Democrats chose to reward states like California who have destroyed their economies with their own actions and punish states like New Hampshire that are doing things right.”