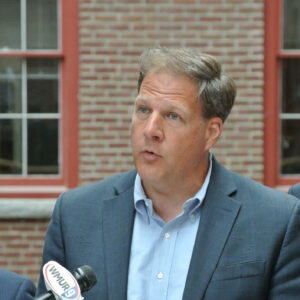 Republican Gov. Chris Sununu, whose been campaigning to defeat far-right candidates in his own party, is livid. He told The Washington Post’s David Weigel the Democrats’ spending to help the candidacy of Gen. Don Bolduc in the U.S. Senate primary is “a sign of weakness.”

“I think it’s unethical, frankly,” Sununu said. “I think it should be banned, somehow, in the political system.”

Hassan, on the other hand, shrugged off her party’s support for election-deniers in the GOP primaries, including millions spent on her behalf.

“I can’t control what outside groups do,” she told the Post.

Earlier this month, President Joe Biden gave a primetime speech declaring, “Donald Trump and the MAGA Republicans represent an extremism that threatens the foundations of our very republic.”

Sununu has put his political capital on the line, endorsing traditional Republican state Sen. Chuck Morse and Keene Mayor George Hansel in their primaries. And a Sununu-aligned PAC is spending money to oppose far-right Republicans like Rep. Mike Sylvia (R-Belmont), who supported a resolution calling for New Hampshire to consider seceding from the United States.

Sen. Chuck Schumer’s (D-N.Y.) Senate Majority PAC has spent more than $3 million attacking Morse in an attempt to boost Bolduc’s fortunes in the primary. And a Democratic mail shop represented by Hillary Clinton’s attorney Marc Elias sent a series of illegal mailers into the New Hampshire Second Congressional District to promote Hansel’s pro-Trump Republican primary opponent Bob Burns. The mailers had no legally-required disclosures of who funded them or was responsible for their content.

An investigation by the New Hampshire Attorney General’s Election Law Union has been superseded by the Biden administration’s Federal Election Commission.

Asked about the illegal mailers and the lack of any information regarding their source, a spokesperson for the state Attorney General’s Office said, “We have no further comment at this point. We are still reviewing the matter.” But with the Biden administration taking the lead in investigating a Democratic political operation, few expect any information before the November general election.