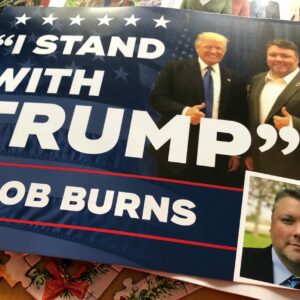 The law firm representing the mail shop is the Elias Law Group, founded by notorious Democratic operative Marc Elias, best known for his work as Hillary Clinton’s attorney who “helped bankroll research that led to the now-infamous dossier on alleged ties between the Donald Trump campaign and Russian government operatives,” Politico reports.

The Elias Law Group is now refusing to disclose the source of the funding for a Democratic mail campaign promoting a “MAGA Republican” in the upcoming Republican primary.

As first reported by NHJournal, pro-Trump candidate Bob Burns’ candidacy has been boosted by a series of anonymous mailers, with no disclaimers, sent from the Reynolds DeWalt mail shop in New Bedford, Mass. The firm has done printing for Hillary Clinton, Sen. Elizabeth Warren, and other prominent Democrats.

According to a statement from Formella’s office, “an unknown entity has paid for at least four political advertising mailers regarding the Congressional District 2 race.  These mailers have been sent to New Hampshire residents throughout Congressional District 2.  These mailers do not contain information identifying the person or entity responsible for the advertising—known as ‘paid-for’ disclaimers—that are required by New Hampshire and federal law.”

And, the statement added, the Attorney General’s Office has confirmed NHJournal’s reporting that “the mailers were produced by Massachusetts printing company Reynolds DeWalt, which is represented by the Elias Law Group.”

“Reynolds DeWalt and Elias have both refused to disclose to the Attorney General’s Office the name of the person or entity responsible for the mailers. However, following discussions with this office, Elias has confirmed that the four mailers without the ‘paid-for’ information were the only ones sent and any additional mailers distributed in New Hampshire by Reynolds DeWalt will contain paid-for disclaimers.”

Marc Elias is no stranger to controversy. In addition to his role in promoting the “Russia Collusion” story, later proven to be a hoax promoted by the Hillary Clinton campaign, Elias also stepped in to help the national Black Lives Matter organization after allegations of financial improprieties arose, including the secret purchase of a $6 million mansion in Malibu, Calif.

Elias was also sanctioned by a federal judge for his behavior in a Texas election law case.

The Burns campaign, along with GOP primary candidate Mayor George Hansel and incumbent Rep. Annie Kuster all said they knew nothing about the mailers or who funded them, the Attorney General’s Office said, adding it will “continue its investigation of the four mailers for violations of New Hampshire election law.”

It also said, “The Attorney General’s Office welcomes information from the public regarding political advertising they find concerning due to lack of paid-for disclaimers.  Please provide copies of the mailer and the dates when received to our email address: [email protected]”

The Elias Law Firm did not respond to requests for comment.

“Annie Kuster can’t win with a record of voting with Joe Biden 100% of the time, so Marc Elias and the Democrats know their only hope is to meddle and detract from her failed tenure in Congress,” said NRCC spokeswoman Samantha Bullock.

Asked about the potential consequences for sending illegal, anonymous political mailers, Myles B. Matteson with the Attorney General’s Office Election Law Unit told NHJournal that, in federal campaigns like this, federal enforcement would supersede the state’s. However, if New Hampshire’s election law were applied, the entity responsible for an illegal mailer could face felony charges.

And how often does a mail shop or law firm, confronted with campaign materials that appear to be a flagrant violation of the law, simply refuse to disclose to the AG’s office the source of the funding?

“It is rare,” Matteson said.