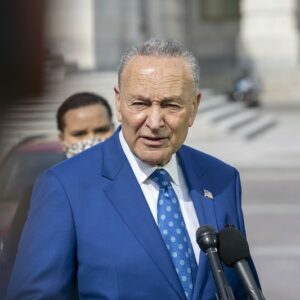 It is not just national Republicans spending money in the New Hampshire U.S. Senate GOP primary. Now Democratic Senate Majority Leader Sen. Chuck Schumer (D-N.Y.) has decided to get in on the action.

Less than 24 hours after the newly-formed White Mountain PAC announced it was spending around $5 million in the next 12 days to boost state Sen. Chuck Morse in the primary race, word came that Schumer intends to spend $3 million of Democrats’ money attacking Morse before Republicans vote.

According to a report from Open Secrets, Democrats had spent $44 million in GOP primaries by July 15. That number is likely close to $100 million at this point. At least $100,000 of Democratic money has been spent on TV ads and campaign mailers promoting Bob Burns in the Second Congressional District.

Now it is coming to the U.S. Senate race.

“Maggie Hassan and her dark money allies just confirm that they know what we know – Chuck Morse is surging in the polls and is the best-positioned candidate to defeat her this November,” said Morse campaign spokesperson Maya Harvey. “Chuck Schumer can throw as many daggers as he wants, but Chuck Morse is a career volunteer. He’s built his business on hard work and given back to his community and state, and he’ll fight for the New Hampshire Way against inflation, to secure the border, and get our economy back on track.”

Schumer’s efforts to hurt Morse in the GOP primary are most likely to help retired Gen. Don Bolduc, who has embraced the 2020 election conspiracy theories promoted by voters President Biden calls “MAGA Republicans. Ironically, Biden gave a speech Thursday night declaring “Donald Trump and the MAGA Republicans represent an extremism that threatens the very foundations of our Republic.”

Now Biden’s party is helping boost one of those “democracy-threatening” candidates. If “MAGA Republicans” like Burns and Bolduc are so dangerous, why are Democrats giving them so much money?