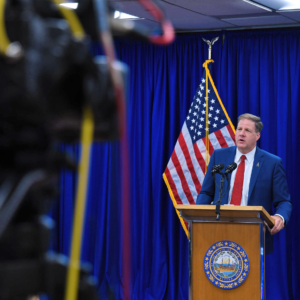 “I’ve always said, as many pro-choice people have said, they are against those late-term months [months seven, eight, and nine] abortions. And this is not some radical idea,” Sununu said in response to questions from reporters. “Go talk to the folks in Massachusetts, go talk to the folks in New York or any of the number of very liberal states that already have these core provisions in place.”

As reporters continued to press him, Sununu exasperatedly exclaimed, “Let’s be clear, none of this was my proposal. It really wasn’t.”

When the reporters continued their questions, Sununu warned them they were being duped. “This is political. You guys are falling into a political fodder [sic]. That’s all. My record stands on its own and has been very clear.”

New Hampshire Democrats have been on the attack against Sununu for supporting any restrictions on abortion at any point in a pregnancy. Their position, as laid out by U.S. Sens. Jeanne Shaheen and Maggie Hassan in a federal bill that would override state abortion laws, is abortion on demand at any point during pregnancy for any reason.

That is a very different stance from then-President Bill Clinton whose stand on abortion was that he wanted it to be “safe, legal, and rare.”

“This budget contains the first-ever abortion ban in New Hampshire history, codifying in statute Republicans’ commitment to stripping women of their right to make their own health care decisions.”

But as Sununu noted, liberal states like New York and Massachusetts have some restrictions on late-term abortions. New Hampshire’s abortion-until-birth policy is extreme even among blue states.

That’s because, as NHJournal has reported, more than 80 percent of Americans — including a majority of those who describe themselves as “pro-choice’ — oppose third-trimester abortions. A Granite State Poll from the University of New Hampshire in March showed that 57 percent of independent voters share Sununu’s view on a 24-week limit on abortions.

Sununu was also asked about the new mandate for an ultrasound before an abortion procedure, including before the 24-week mark.

“I appreciate this could add potential healthcare costs. I don’t like that at all, but as I’ve said, I’m not going to veto it. It’s a $13 billion budget with all the tax cuts and other stuff,” said Sununu. “There’s so many other pieces to this. That’s one provision. I might not love all the details of that provision, but there’s a lot of really positive things for the citizens of New Hampshire.”

Sununu indicated he’s prepared to sign the budget, even though he may not like every part of it.

The abortion issue dominated the final few minutes of Thursday’s presser, a fact Sununu noted as he wrapped up.

“That’s going to be the last question after 111 press conferences? Dear Lord.”