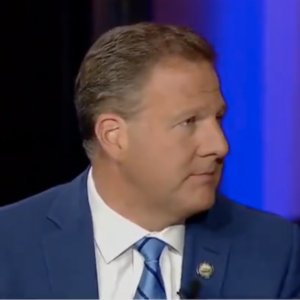 Much of the early discussion in the town hall, broadcast live on FOX News from Nashville, centered on the coronavirus pandemic, and the differences between states led by Democrats versus Republicans.

“The mistakes were made in New York and New Jersey and Pennsylvania and Michigan and California, and how is it that they got everything so wrong and you [got it right],” Hannity asked Sununu.

“We were writing the playbook, right? Every governor had to write their own playbook based on their dynamics, based on what we’re seeing,” replied Sununu. “Obviously the ‘Live Free or Die’ state without a doubt, led the charge on flexibility, opportunity, and now the economy.”

“I think one of the key issues that governors did very well is you had to earn public trust in the crisis early on, and you do that with transparency, with communication. When you do that and you earn that public trust as we’re coming out of it, they trust you to make the right decisions.”

Sununu is riding high at the moment. His state is tied for the lowest unemployment in the nation, state revenues continue to rise, the rates of COVID-19 are falling and a new UNH poll gives him a 72 percent approval rating on handling the pandemic.

“I didn’t notice any of you writing any books in the middle of all this, talking about how great leaders you are.” quipped Hannity, taking a dig at New York Governor Andrew Cuomo.

Sununu also took time to once again criticize the “blue state bailout” in Biden’s stimulus package, in which he claimed states like New Hampshire were unfairly punished for fiscally prudent leadership. Sununu said Biden’s plan made him “ticked off.”

“They came in and really changed the rules to really fit their agenda,” said Sununu. “What you’re seeing is, governors, especially Republican governors, are the last line of defense against not a socialist agenda, but true socialism, that’s actually what’s happening with all the executive orders.”

Sununu also criticised the Biden administration on the crisis on the southern border.

“This is not a southern border crisis, it is an American crisis. There’s no doubt about it. And it’s a humanitarian crisis at that. Governor Ducey [R-AZ], Governor Abbott [R-TX] deserve an immense amount of credit. They are holding the line as best they can,” said Sununu. “Those videos are real. We see what’s happening to those kids, you’re seeing what’s happening to those families. And there’s no doubt it has an impact all across this country. Everyone has to acknowledge that and be part of that solution.

The town hall was organized by the Republican Governors Association’s during their Spring Policy Conference. Earlier Wednesday, Sununu moderated a discussion with RGA Chairman Doug Ducey and three other GOP Governors on how they are fighting back against “overreach” from the federal government.

During the town hall, Sununu returned to his heavy criticism of New Hampshire’s all-Democrat congressional delegation, the Biden administration, and the federal government as a whole.

Earlier this month, Sununu called out Biden for putting through his massive “infrastructure” bill, without any bipartisan support.

“The 50 Republican senators down there, they’re not all extremists. And you know, there’s a lot of folks that want to find that middle ground down there,” Sununu said at the time. “And there’s a lot of opportunity to do that. [Biden] has tried zero. They haven’t even attempted it.”

Sununu has also recently called out Biden for lack of communications with the states, along with the Food and Drug Administration for abruptly halting use of the Johnson and Johnson coronavirus vaccine over scattered and rare cases of blood clotting.

“The communication out of Washington has been terrible, like it really has been horrible,” said Sununu.