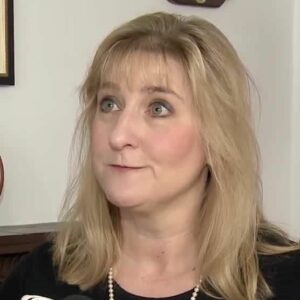 Senate Democratic Leader Donna Soucy (D-Manchester) has taken the debate over state spending and property taxes to Twitter, where her views can be read by hundreds of thousands of Granite Staters.

Read, but not replied to.

No, the top elected Democrat in state government reserves that right for a handful of progressive activists and national celebrities including Hillary Clinton, Lady Gaga and George Takei — best known as ‘Mr. Sulu’ from the original Star Trek TV show.

Soucy has set her Twitter account (@DonnaSoucy) to block replies from anyone she doesn’t follow. And because she only follows 556 people — overwhelmingly Democratic activists and operatives, along with celebrities like Aerosmith  — most of the 1.3 million Granite Staters are left out of the conversation.

Soucy’s Twitter policy is part of a broader approach taken by New Hampshire Democrats to limit interactions with the public and avoid difficult questions from the press.

Bradley also posted this comment on Twitter (@TheNHSenate). Because Bradley’s replies are open, anyone who wanted to was able to reply. For example, state Democratic Party chair Raymond Buckley replied, “Simply rubbish. Why do Republicans so easily lie? No shame.”

“Bottom line: NH has among the highest property tax rates in the country due to Republicans downshifting of tax burdens to towns. @NHGOP have held full control of government for the last two years. If they wanted to lower property taxes, they would. They don’t. #NHPolitics”

But when Granite State voters tried to reply to Soucy’s claims, they were blocked. Several of them reached out to NHJournal and complained about their inability to respond to an elected official. By Sunday night, Soucy’s tweet had nearly 20,000 views — but has zero responses.

Other prominent Granite State elected officials in both parties have Twitter accounts, like Gov. Chris Sununu and U.S. Sen. Jeanne Shaheen, have Twitter accounts that allow the general public to post responses. Why is Soucy’s closed? She declined to respond to requests for comment.

One notable exception is House GOP Leader Rep. Jason Osborne (R-Auburn), but unlike Soucy, he uses a “protected” Twitter account. Only approved followers can see his tweets, not the entire Twitterverse. And the few people who can see them can also respond to them.

Soucy’s decision to block any responses is significant in this case because her tweet makes a factual claim that appears to be untrue. While New Hampshire does have high property taxes, the state surged funding to local governments in the most recent budget, as Bradley wrote.

In his inaugural address earlier this month, Sununu also rebutted the Democrats’ attack.

“And over the last six years, we downshifted CASH – NOT costs, to our cities and towns, returning hundreds of millions of dollars in tax relief for our citizens. In fact, since I became Governor, 82 percent of New Hampshire municipalities have seen their property tax rates go down.”

The Senate Democratic Caucus office confirmed to NHJournal via email that Bradley’s statements about their votes on property tax relief are accurate.

Soucy’s attempt to block voter feedback is of a piece with the campaigns run by her fellow Democrats last year. Senator Hassan and Reps. Chris Pappas and Annie Kuster pointedly avoided holding town halls or any events open to the general public — a point their GOP opponents made again and again. Asked by a reporter about her refusal to hold public events, Hassan replied that voters could speak to her if they ran into her at Market Basket or Dunkin’ Donuts.

And they are all participating in a Democratic party embargo against NHJournal in order to avoid difficult questions or less-than-favorable coverage. Last year, then-House Democratic Leader Renny Cushing sent a letter to his entire caucus ordering them not to speak to reporters from NHJournal. Hassan went so far as attempting to throw an NHJournal reporter out of a press conference two weeks before Election Day.

But for good government advocates, the more concerning issue is the growing effort by elected officials to limit the ability of the public to respond to their public statements and actions. “Federal appeals courts have [acknowledged] that the public has a right to access official communications on social media,” said attorney Houston Davidson, writing for the pro-free-speech Electronic Freedom Foundation.

President Donald Trump was sued over blocking specific individuals from following him on Twitter. The federal courts ruled that, because he used Twitter for public policy statements, his actions were illegal. The case isn’t the same, but some of the same legal issues are at play.

“Just as the Second Circuit found in Knight First Amendment Institute v. Trump, the Eighth Circuit concluded that even government officials’ nominally private accounts can in fact be used for official purposes—in which case it would violate the First Amendment for these accounts to block followers based on their viewpoints,” Davidson wrote. “The Eighth Circuit made it clear that ‘the essential character of a Twitter account’ is not ‘fixed forever,’ explaining that ‘[a] private account can turn into a governmental one if it becomes an organ of official business.’

As of press time, Soucy’s Twitter account still blocked responses from the public. And neither director Rob Reiner nor actor Denis Leary — both followed by Soucy — had not taken advantage of their opportunity to comment.