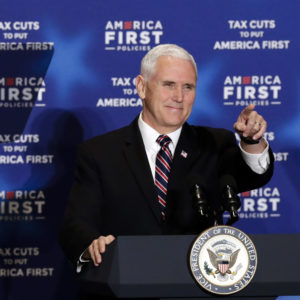 Pence Heads Back To New Hampshire, Sparks Flurry of 2024 Speculation

Former Vice President Mike Pence is coming to the First in the Nation Primary state Thursday night for the first time since the 2020 presidential campaign. Pence’s speech to the Hillsborough County GOP’s annual Lincoln-Reagan Awards Dinner will make him the first person on the list of presumed 2024 GOP presidential candidates to visit New Hampshire in person this year.

And it appears he’ll be well received. State Republican National Committeeman Chris Ager says the Hillsborough GOP has sold more tickets for this event than ever before, and the top-dollar VIP reception tickets completely sold out.

“Hillsborough Republicans are ready to welcome Vice President Pence back to the Granite State,” Ager, who also serves as chairman of the county GOP, told NHJournal.

The New Hampshire visit marks Pence’s second trip to an early presidential primary state this year. In April, Pence visited South Carolina where he toured a medical school and gave an address to the Palmetto Family Council, a Christian conservative nonprofit. In his speech, the former vice president excoriated President Joe Biden and touted the accomplishments of the Trump years.

“In 48 months, the Trump-Pence administration achieved the lowest unemployment, the highest household incomes, the most energy production with the most pro-American trade deals, the most secure border and the strongest military in the history of our country,” Pence said at the time. “The Biden-Harris administration has launched an avalanche of liberal policies that have threatened to derail all the progress that we made for a safer, more prosperous, more secure America.”

Pence has performed particularly well in recent polling. Last month, a poll from Politico and Morning Consult showed Pence as the GOP’s top pick for the office after former President Donald Trump, with Florida Gov. Ron DeSantis and Donald Trump, Jr. closely behind.

However, social conservatives are a major part of Pence’s political base, and that’s not as large a segment of the GOP primary electorate in New Hampshire as in other states.

Michael Biundo, a GOP consultant who has worked on presidential campaigns, does not think that will be a problem for the former VP, though he adds it’s too early to speculate about 2024.

“One of the things that we found was that it was hard doing the dance between Iowa and New Hampshire when you’re known to be a social conservative and then turning around and trying to speak to the voters of New Hampshire in a slightly different way,” Biundo told NHJournal. “I think the vice president is different because he’s got a lot of accomplishments that are under the Make America Great agenda and working side by side with Donald Trump, that he can help lean on. Those messages play very well here.”

Ironically, the biggest challenge for Trump’s vice president may be Trump himself. “Trump voters will give Mike Pence a lot of credit for being a loyal — a very, very loyal — vice president,” one veteran GOP strategist told NHJournal. “But obviously on January 6, the president’s opinion of him changed.”

It certainly has. Despite Pence’s unwavering support for Trump, the former president has since labeled his VP a traitor who “stabbed me in the back” for certifying the results of the presidential election as required by the Constitution. Trump remains the most popular Republican among GOP primary voters and his view of Pence will likely have a significant impact on Pence’s standing.

Still, says Biundo, Pence has the potential to be a strong candidate.

“The vice president has a good shot. He’s got a great resume, not only as VP but as a governor and even before that in Congress. I think he’s got a lot of things to talk about and how that plays out over the next several months will be interesting to watch.”

Other potential candidates have been leaning into New Hampshire as well. Arkansas Sen. Tom Cotton has made two virtual appearances so far this year, once at the NHGOP Annual Meeting, and for a fundraiser for then-House candidate Bill Boyd (R-Merrimack). Former Secretary of State Mike Pompeo and former New Jersey Gov. Chris Christie have also made virtual appearances.

Pence has been making the most out of his post-executive life, taking steps commonly associated with a future political run.

In April, Pence launched Advancing American Freedom, an advocacy group with a board made up of conservative stalwarts like former House Speaker Newt Gingrich, former Director of the National Economic Council Larry Kudlow, and Trump advisor Kellyanne Conway. In September, he will be launching a podcast with the Young America’s Foundation, and he recently signed a multimillion-dollar book deal with Simon and Schuster.

“New Hampshire Republicans are always welcoming to potential presidential candidates,” Ager said. “Plus, Pence’s visit will be a reminder to the rest of the country that the road to the White House begins here.”