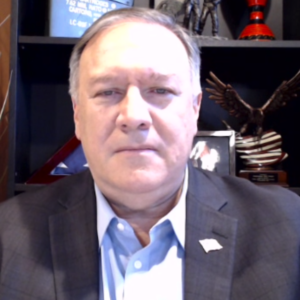 Fresh off the heels of his visit to Iowa last week, former Secretary of State Mike Pompeo made a virtual visit to the Granite State on Monday night. He was the special guest at a fundraiser for Bill Boyd, who is running to succeed the late Speaker Dick Hinch in the state House.

Pompeo’s trip to Iowa was the first to the early voting state by any of the prospective GOP POTUS candidates. His virtual visit to New Hampshire adds fuel to the fire in speculation that he plans to make a run himself. Assuming, that is, former President Donald Trump doesn’t throw his hat into the ring.

The event was organized by the New Hampshire GOP and Matt Mowers, a former senior White House advisor at the State Department, who spoke highly of his former boss.

“[Pompeo] fought tirelessly, whether it was his time in Congress, as CIA director, or as secretary of state to put America’s interests first to ensure that Americans were protected both around the world and here at home,” Mowers said.

Pompeo used his time to lay out his history working at the top levels of American national security, and discuss the Democrat agenda in Washington.

“The most glorious moment [as secretary of state] was when we convinced [North Korean Leader Kim Jong Un] to allow me to return to the United States with three Americans that were being held hostage,” Pompeo said. “I joke sometimes, I’ve now spent more time with Chairman Kim than any other American. I passed Dennis Rodman by my third meeting”

Pompeo also wished the Biden administration his best in dealing with Kim, but warned of the dictator’s ruthlessness as a leader.

North Korea agreed not to conduct long-range missile tests in a Trump-era deal struck by Pompeo, and they stuck to it. But last week the reclusive nation claimed it had begun testing missiles again, likely to gauge how strong the Biden administration’s response would be.

When asked about the Democrat’s push to end the filibuster in order to advance their legislative priorities in the Senate, Pompeo didn’t pull any punches. “This is a raw power grab, make no mistake about it.

“When I hear them talk about the filibuster, I think two things: One, it’s enormously hypocritical. Democrats have used this, and [also] they want to say that somehow opposing the removal of the filibuster is racist,” he said.

According to FOX News, last year Democrats in the Senate used the filibuster 327 times while Republicans used it only once.

Pompeo also criticized H.R. 1, which was cosponsored by the entire New Hampshire congressional delegation. “They believe they have this 18 month window to do all kinds of things, whether it’s H.R. 1 where they’re going to deny Gov. Sununu and your state legislature the chance to set the voting rules for the state of New Hampshire.”

New Hampshire Secretary of State Bill Gardner criticized the election law in an NHJournal published Monday morning, and he repeated those criticisms later in the day.

“New Hampshire has a solid track record for running sound and trouble-free elections that do not warrant this type of federal meddling. What’s good for Speaker Pelosi in California is bad for us in New Hampshire, and our congressional delegation should know that,” Gardner said.