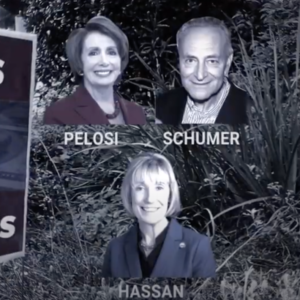 During a U.S. Senate hearing on a Democratic bill regulating elections and voter laws, Maine’s Sen. Angus King — an independent who caucuses with the Democrats —  summed up his position: “Maine has same-day voter registration, no-excuse absentee voting, no voter ID — and no fraud.”

Setting aside the assertion about voter fraud, it’s the rest of King’s message Republicans are targeting.

The ad is part of a million-dollar  TV buy also targeting vulnerable Sens. Raphael Warnock in Georgia, Mark Kelly in Arizona, and Catherine Cortez-Masto in New Mexico. It links Hassan to Senate Majority Leader Chuck Schumer and House Speaker Nancy Pelosi, and charges them with “wanting to use your tax dollars to fund their political ads.”

As NHJournal has previously reported, another aspect of the “For The People Act” — cosponsored by Hassan in the Senate and backed by both New Hampshire representatives in the House — is letting politicians get to spend upwards of $5 million dollars in taxpayer money on their own political campaigns.

Internal polling from the NRSC shared with NHJournal shows taxpayer funding of elections is not a winning issue for Democrats. According to the data, 56 percent of Americans oppose taxpayer-funded campaign ads.

“Senate Democrats claim they are fighting to protect our elections, but the reality is far different. Their radical bill would eliminate common-sense election security measures like Voter ID and force taxpayers to fund Democrat attack ads. H.R. 1 – the Corrupt Politician Act – is an assault on American taxpayers and erodes State safeguards that keep our elections secure,” NRSC Chairman Rick Scott said in a statement.

The numbers for ending voter ID are even worse. According to the same polling, 77 percent of Americans support voter ID requirements.

“It represents the largest power grab by Washington politicians in history and will do irreparable harm to our nation. Sen. Hassan will have a lot of explaining to do over the next two years and a lot to answer for in 2022,” Scott said.

The Democratic legislation, which passed the House in a partisan vote — 220 to 210 with only one Democrat voting against the bill by a prior agreement — overrides state election laws. States would no longer decide if they want to require voter ID, allow early voting, or have unrestricted mail-in ballots. Should states have these laws?  Oregon has all mail-in ballots while New Hampshire has traditionally encouraged Election Day voting and avoided no-excuse absentee ballots. Who’s right?

Critics of the Democrats’ approach argue there is no “right” answer, every state is different, and voters trust local governments more than they do Washington, DC. According to a recent Gallup poll, 60 percent of Americans trust state government to solve problems. Just 33 percent say the same about Congress.

Republicans clearly believe this is a winning issue. During a Wednesday call with Granite State conservative activists and political leaders, Scott said Hassan is vulnerable.

“Hassan is clearly somebody we can beat. She’s way too liberal for New Hampshire.” Scott said.