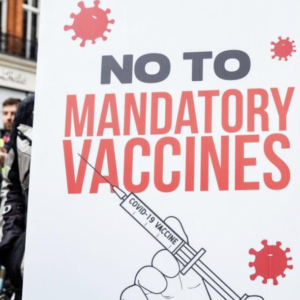 Posted to Politics May 27, 2021 by Andrew Mahaleris

While New Hampshire Republicans tend to take pride in their support for free markets and private business, they’re setting those concerns aside and backing government regulations preventing businesses from embracing so-called “vaccine passports.”

The phrase is actually a shorthand for systems — from flashing a paper vaccine card to actual phone apps — that would let people prove their vaccine status to businesses and governments. The debate is whether fully vaccinated people should be able to receive special treatment, or engage in activities the unvaccinated, because of their higher-risk status, cannot.

Health experts note that for vaccinated people, the unvaccinated pose no risk. And yet the level of interest in segregating people based on vaccination status is so high, some New Hampshire legislators felt the need to step in.

Tim Baxter (R-Seabrook) has proposed legislation that would prohibit state government from requiring people to receive the vaccine or present proof of their vaccination status. That restriction would also apply to private businesses with government contracts.

“Vaccine passports could discriminate against people flying, traveling, trying to get a job, or even something as simple as going to the supermarket,” Baxter told the House Committee on Executive Departments and Administration last month.

On Tuesday of this week, that committee split on a non-germane amendment based on Baxter’s legislation when Rep. John Sytek (R-Salem) “took a walk” and didn’t enter a vote on the amendment. Doing so ensured the measure wouldn’t receive an “ought to pass” recommendation from the committee.

Sytek did not respond to multiple requests for comment.

“I think having a bill that stops vaccine passports is vital because it’s such a threat to the liberty of the people in New Hampshire,” Baxter told NHJournal. “That’s why I was the first one to put in an amendment to fight back against it. It was really unfortunate to see a representative that committed to vote for it, then changed his mind at the last minute.”

Even without the OTP recommendation, the amendment will move to the House floor, where Baxter says he is excited about its passage.

“That (mandates) doesn’t represent the Live Free or Die values that I believe in, and that most of the public strongly believes in. That’s why I’ve been fighting back against vaccine passports.”

“If we allow businesses to decide what people have to do to their body to be employed or to be customers, we have to look at other things,” Roy told the Associated Press. “There’s no limit to what businesses could do to citizens who need a job, or a place to shop or to eat. We have to draw a line in the sand that people, their bodies, are autonomous.”

Democrats and libertarians have been quick to note the irony of “free market” Republicans regulating private businesses and their interactions with customers.

“Requiring proof of vaccination in a privately owned establishment is, like choosing to receive a vaccine, a private choice. The government should play no role in either mandating or banning the negotiation of these issues between private parties,” said Jeffrey Miron and Erin Partin of the libertarian Cato Institute.

On Wednesday, a measure targeting vaccine mandates went before a House committee. In an 11-9 vote, the House Labor, Industrial, and Rehabilitative Services Committee passed an amendment to SB 123 that would ban employers from mandating vaccination for employees.

The healthcare industry was exempted from the ban, meaning that nurses, doctors, and other medical professionals could still be required to get the vaccine if their employer chooses.

Democrats on the committee believe the added amendment will make it more difficult to actually pass the full measure.

Similarly, a Senate committee Thursday passed legislation that would protect “medical freedom in immunizations,” ensuring no one needs a COVID vaccine to access state facilities or benefits. Additionally, it established a committee to study medical intervention.

Republicans have been generally opposed to mandating vaccinations for COVID-19, as they believe it violates an inherent right to individual autonomy.

“Since the principal role of government is to protect the rights of the individual, it follows that government must never be permitted to violate an individual’s right of bodily autonomy by mandating a medical treatment,” said Rep. Tim Lang (R-Sanbornton) and Rep. Leah Cushman (R-Weare) in a recent op-ed for NHJournal.

Supporters of mandates generally believe that the health and safety of society as a whole should outweigh those individual rights. They also argue New Hampshire already has mandated vaccinations for other deadly diseases, such as smallpox, whooping cough, and measles. How, they ask, is the coronavirus any different?

“‘Freedom’ does not give one the freedom to infect others,” said Brendan Williams, president and CEO of the New Hampshire Health Care Association.