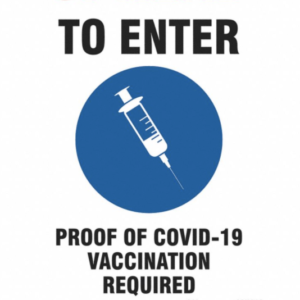 OPINION: Vaccine Passports Should be a Private Concern

After a long year of lockdowns and other COVID-19 related restrictions, life is beginning to return to normal. The Centers for Disease Control and Prevention recently issued revised guidelines for mask usage, and states are beginning to ease capacity limits and mask requirements for restaurants, businesses, churches, and more. More than half of all Americans are fully vaccinated.

With this wave of reopenings and vaccinations, the issue of “vaccine passports” has become part of the public discussion. A “vaccine passport” or “vaccine verification” is a document – either paper or electronic – that certifies its’ bearer has received a COVID-19 vaccine. Uses for these credentials include facilitating travel or gaining admission to large events.

Proponents of vaccine passports argue that they will enable businesses to restrict entry or service to vaccinated individuals, thus reducing the risk of disease transmission among patrons and staff while generating increased economic activity. In addition, requiring proof of vaccination to attend concerts, sporting events, or dine in a restaurant may incentivize undecided individuals to receive a vaccine, with positive public health spillovers.

Opponents, meanwhile, argue that requiring vaccine passports is invasive and illegal. Legitimate privacy and security concerns exist – particularly for electronic or app-based vaccine verification systems. On the legal side, however, arguments that asking an individual to disclose their vaccination status violates federal medical privacy laws, such as HIPAA, fall flat because voluntary disclosure of private medical information is permitted.

So far no national standard exists for vaccine certification, and the White House sees the federal government’s role as advisory only. Despite the lack of active vaccine passport programs, several states have introduced or passed legislation banning such passports. Many of these states – Arizona, Georgia, and Idaho – ban vaccine passport requirements by government offices or to receive public services. Others go further, including Florida, where Governor DeSantis issued an executive order banning the use of vaccine passports by both governments and private businesses.

But government has no reason to be involved in the creation, administration, or enforcement of vaccine passports. Nor should governments prevent private businesses from electing to require proof of vaccination before serving patrons. Requiring proof of vaccination in a privately owned establishment is, like choosing to receive a vaccine, a private choice. The government should play no role in either mandating or banning the negotiation of these issues between private parties.

At the same time, state actors should not ban the creation of a standard vaccine passport or certification by a private businesses or groups. These passports provide a way for businesses, churches, sporting events, and even family gatherings to protect the health of employees, customers, congregants, and other participants. So long as we are talking about voluntary activities, this should not raise any policy issues.

Vaccine passports, privately developed and issued, should not be controversial. People will choose to engage – or not – with businesses and groups that institute such requirements. Private vaccine passports capture public health benefits in a market-driven manner. In general, just because something is good (or bad) does not mean the government should require (or ban) it. Vaccine passports are no different.

Jeffrey Miron is director of economic studies at the Cato Institute and the director of undergraduate studies in the Department of Economics at Harvard University. Erin Partin is a Research Associate at Cato Institute