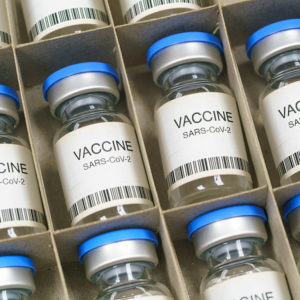 It was a distressing claim: According to Ronelle Tshiela, a New Hampshire Black Lives Matter activist and Gov. Chris Sununu appointee to the state’s Commission on Law Enforcement Accountability, Community and Transparency (LEACT), the Walgreens in Rochester, NH “had to throw out extra [COVID-19] vaccines instead of giving them out because they got in trouble with the state.”

For New Hampshire Democrats, it was just the latest example of the Sununu administration’s mishandling of vaccine distribution. “This is unacceptable,” tweeted progressive state Rep. Nicole Klein Knight in response.

“What the literally F—,” added Robin Vogt, Democratic candidate for state rep and vice-chair of the New Hampshire Progressive Coalition. “That’s beyond scary to hear.”

Unacceptable. Scary. And, it turns out, completely untrue.

NHJournal contacted the Rochester Walgreens to confirm the claim that vaccines were being tossed. Turns out the store, like most drugstores participating in the vaccine distribution, has procedures in place to make sure no vaccine is thrown away. A spokesperson said that while “excess doses are rare” — hardly a surprise in the current COVID climate — if there are shots available at the end of the day and approaching their expiration period, Walgreens employees will reach out to local, vaccine-eligible customers to ensure they don’t go to waste. If they can’t find anyone eligible, the local Walgreens will reach out to someone who can.

“This particular store has an ongoing relationship with a nearby hospital system to ensure that in the event of an excess dose, it can be efficiently distributed to an eligible patient,” the spokesperson said.

This incident — inaccurate, negative information about New Hampshire’s vaccination rollout spread by Democrats — appears to be part of a pattern. Both media reports and public statements from Granite State Democrats are pushing a narrative that New Hampshire’s handling of COVID vaccine distribution is a disaster.

“Less than a week after Gov. Chris Sununu launched his new Vaccine & Immunization Interface (VINI) system, Granite Staters are reporting not being able to register for their COVID vaccination and being turned away for their scheduled COVID vaccination appointment at Walgreens due to site glitches that over-registered Granite Staters,” the New Hampshire Democratic Party said in a statement.“There are still hundreds of thousands of Granite Staters who will need to sign up for the vaccine, and Governor Sununu needs to figure out a way to address these problems immediately,” said state Sen. Cindy Rosenwald, D-Nashua. “The Governor’s inability to create a working, effective registration system is unacceptable.”

In fact, the state registered 100,000 people for shots on the first day the VINI system was up and running.

“Actually we registered more than 100,000 people on Monday,” Sununu told NHJournal. “Yes, the system was slow in the morning, but 100,000 registrations — and more than 8o,000 appointments booked — is better than anyone expected in one day.”

Breaking the 100,000 mark on day one might strike the average Granite Stater as a pretty good performance. And despite the negative rhetoric, New Hampshire is on par with the rest of the northeast in guaranteeing vaccines are going into arms. Plus, the state is doing better than the rest of the country.

The Granite State ranked 18th on Tuesday for the percentage of “shots in arms — doses received that have been distributed — at 82 percent. While that’s slightly lower than Massachusetts (88 percent) and Maine (84 percent), it’s higher than the national average (78 percent.)According to The New York Times, 26.1 percent of New Yorkers have received at least one dose of a coronavirus vaccine. In Massachusetts, Gov, Charlie Baker’s administration has gotten 29.1 percent of the population at least one dose.

Meanwhile, New Hampshire is sitting right between the two states, with 28 percent of Granite Staters given at least one shot, and 14 percent have been fully vaccinated — the 10th-best performance in the country.

So why is the conversation so negative? Why is the media coverage’s message one of vaccine distribution failure — or of mixed success at best?

“I think Democrats are looking for reasons to say things are going wrong. But they’re going really, really well,” Sununu said. “If the worst they can say is that the system was slow for a few hours in the morning, I’m OK with that.”

Sununu acknowledged the website was slow during the first few hours as demand surged. “An unprecedented volume of web traffic was experienced this morning, a good sign that Granite Staters are ready and eager to receive their vaccine, which did cause some to experience delays,” Sununu said in a statement Monday morning.

But by Tuesday morning, with 100,000 successful registrations and the system still up and running, there wasn’t a lot for Democrats to criticize.

And why should they, Sununu asked? “This attack on our vaccine distribution is insulting to the National Guard, on Perry Plummer, and the great job his team is doing,” Sununu said, “Look, I’ve got thick skin, I can take it. But it’s really unfair to attack these front-line workers who really are getting the job done.”