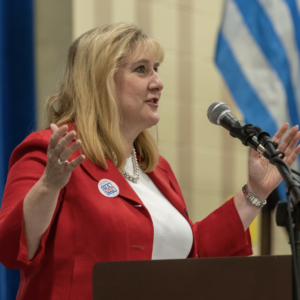 “Reproductive freedom must always be protected in the Live Free or Die State, and the Supreme Court’s unwillingness to stand up for the reproductive rights of Granite Staters has only made the need all the more urgent to repeal Gov. Sununu’s abortion ban,” Soucy said in a statement. (New Hampshire Journal was blocked by the Senate Democratic Caucus from participating in the press conference.)

Some obvious questions were raised by Soucy and her colleagues holding a press conference about Texas’ abortion law, not the least of which is, “Why the heck is a state legislator in New Hampshire talking about a law passed in Texas?”

Does Soucy believe there’s a legal finding relevant to New Hampshire in the Supreme Court’s decision not to intervene? State Sen. Rebecca Whitley (D-Hopkinton) made a similar claim, declaring the Supreme Court has “all but overturned Roe. V. Wade.”

According to the Court’s own announcement of its decision not to intervene, those claims are false. In fact, the Court’s ruling in the Texas case literally has nothing to do with Roe.

“Although the Court denies the applicants’ request for emergency relief today, the Court’s order is emphatic in making clear that it cannot be understood as sustaining the constitutionality of the law at issue,” the majority wrote, adding, “although the Court does not address the constitutionality of this law, it can of course promptly do so when that question is properly presented.”

As even pro-abortion activists have acknowledged the Texas law includes no enforcement power for the state, instead leaving that to private citizens. As the majority notes, “federal courts enjoy the power to enjoin individuals tasked with enforcing laws, not the laws themselves.”

Soucy, an attorney, surely understands this. So — why the presser?

Another follow-up question: Soucy and her fellow Democrats say they want the current New Hampshire law, which allows unrestricted legal abortion for the first six months of pregnancy, to be repealed.

If that happens, abortion would be legal in New Hampshire for any reason — including sex selection, “eliminating” babies with Down Syndrome, etc. — up to the day of birth.

Is that really Soucy’s position? Is it the position of the New Hampshire Democratic Party? More than 80 percent of Americans, including a majority of pro-choice Americans, disagree. In fact, in many western European countries, Soucy’s stance on abortion is viewed as infanticide.

Their extreme stance on abortion — no restrictions, any reason, any time beyond viability — may explain why New Hampshire Democrats, who are eager to talk about Texas’ abortion laws, are reluctant to discuss their own.