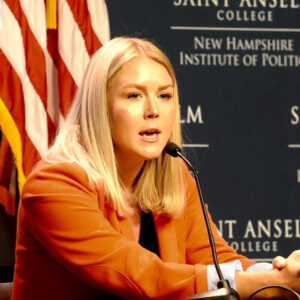 The battle of the polls continues in the First Congressional District GOP primary between presumed frontrunner Matt Mowers and his closest challenger, Karoline Leavitt. A new survey from Republican pollster Remington Research Group — the fourth poll of the NH-1 race released this week — puts the two in a neck-and-neck tie at 21 percent.

A hefty 35 percent of these likely GOP primary voters were still undecided.

“Of the candidates considered to be competitive in this race, Karoline Leavitt holds the highest favorability rating at 36 percent,” according to the poll’s memo. “While Matt Mowers is just behind her, his negative image share is 14 points higher. With 53 percent of voters having no opinion of Leavitt, there is still ample room for her positives to grow and outpace her competitors.”

The poll, conducted for the Leavitt campaign, is similar to the findings of the St. Anselm College Survey Center results released Monday. It found Mowers leading Leavitt by just four points, 25-to-21 percent.

That is at odds, however, with two other polls released earlier this week, including the New Hampshire Journal poll, that found a significant lead for Mowers.

The new RRG poll of 462 likely Republican primary voters was conducted August 14-17 and has a margin of error of 4.5 percent.

“Our America First message is resonating, and our grassroots momentum is surging,” Leavitt told NHJournal. “The people of New Hampshire are tired of carpetbagging swamp sellouts using our state to advance their own careers. Our nation is heading off a cliff, and the only way we will get the trains back on track is by sending a homegrown conservative fighter who is committed to advancing President Trump’s America First Agenda in Congress.”

Another interesting finding is Leavitt’s relatively high name ID in the new poll, as opposed to the polls conducted earlier in the race. It could be a sign her aggressive earned media campaign and recent marketing investments are starting to pay off.

Dante Scala, professor of political science at the University of New Hampshire, is impressed. He says Mowers still has the inside track, “but I give Leavitt high marks. She’s sharp, and both her ads and debate performances are on point. She has a theory of the race — go #MAGA on every issue.

“The question is whether that niche is big enough to put her in first place.”