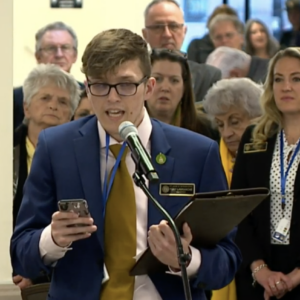 “The Democratic Party, ironically, is the least Democratic organization I’ve ever been a part of.”

Thus began a statement from Democrat-turned-independent Rep. Tony Labranche (I-Amherst) on the floor of the House of Representatives on Thursday, the latest evidence of the chaos inside the leaderless Left of the Democratic caucus.

Labranche used the “unanimous consent” portion of the House session to rise and speak about his treatment at the hands of the Democratic Party leadership, in particular controversial party chair Ray Buckley. House Democratic leadership objected and attempted to prevent the young progressive from speaking. The Democrats’ vote to silence him failed 199-70. More Democrats voted to allow Labranche to take the floor than voted in line with leadership instructions, yet another sign of the chaos inside the caucus.

“This is a [expletive] show,” one House Democrat told NHJournal, who spoke anonymously due to demands from Democratic House Leader Renny Cushing (D-Hampton) that no members should speak to this news outlet. “How did they let this happen?”

Labranche, who insists he’s a strong supporter of Cushing and the caucus leadership, launched into a scathing attack on the state’s Democratic Party, echoing a letter he send to the Democratic caucus two weeks ago. (NHJournal’s original reporting can be found here.)

“I cannot in good conscience be a member of a party that calls itself Democratic, yet refuses to follow its own constitution and does not allow regular party members to partake in the governance of the party,” Labranche said.

Labranche is one of four House Democrats who’ve abandoned the party just in the past few weeks.

One of the youngest LGBTQ legislators currently serving in the country, Labanche said he was particularly disappointed by his treatment at the hands of Buckley, who is also gay. Labranche said that after he supported a challenger to Buckley for state chair, he encountered “harassment and threats” during a run for the local school board. When a supporter’s sign was destroyed and their pride flag was burned, he reached out the Buckley for help.

“I’m busy,” Buckley allegedly told him. “Send me an email.”

“It has been nearly a year since the email was sent and I have not heard back from them. The Democratic Party claims to stand with the LGBTQ+ community and other minority groups, yet when the youngest openly LGBTQ+ legislator in this country’s history reached out for help, I was ignored,” Labranche said.

Republicans were quick to point out that the Democratic leader who objected to Labranche’s speech before he could give it was Rep. Katherine Rogers (D-Concord). Democrats accused the House GOP leadership of censoring her speech when she tried to deliver remarks during unanimous consent in January.

A month later, Democrats attempted to use the same rules to stop Labranche from speaking.

The House Democratic Caucus is all but leaderless as Cushing struggles with health issues and the Assistant Minority Leader Rep. David Cote (D-Nashua) sidelined by health concerns as well. According to multiple Democratic sources, Cushing can’t step down to allow a new leader because the caucus is divided between progressive activists and more traditional Democrats. That schism has led to charges of racism from progressives toward their fellow Democrats, and countercharges of antisemitism among progressive activists.

“Their leaders were trying to herd members out of the hall,” one House member said. “They didn’t want to talk about what [Labranche] was saying.”

Labranche’s remarks overshadowed a rare legislative victory for the Democratic minority when HB 1609, a bill to add an exemption for rape, incest and fetal anomaly to the state’s new ban on late-term abortion ban, passed the House 179-174. The measure would also remove a controversial ultrasound mandate.

Gov. Chris Sununu said Thursday he supports the modification to the law, which allows unlimited abortion for the first six months of pregnancy.

“I would like to thank the bipartisan group of legislators who voted to pass HB 1609 today,” Sununu said in a statement. “This is another step in the right direction as we work to make necessary changes to our laws, and I urge the House Finance Committee and members of the State Senate to keep up the momentum and get this bill across the finish line.”

Buckley and the state Democratic Party declined to respond to requests for comment.