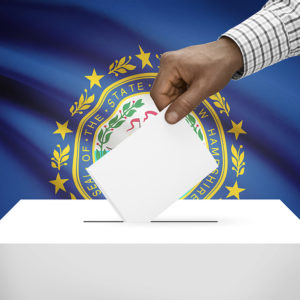 In a Philadelphia speech Tuesday, President Joe Biden railed against new election laws in Republican-controlled states, labeling them “Jim Crow” and race-based voter suppression. But New Hampshire already has laws that are more “restrictive” than the laws Biden opposes.

Does that make New Hampshire a “Jim Crow” state?

“[There is] an unfolding assault taking place in America today, an attempt to suppress and subvert the right to vote,” said Biden. “We’re facing the most significant test of our democracy since the Civil War. That’s not hyperbole, since the Civil War.”

In response, Biden said, his administration is going to court to challenge “Georgia’s vicious anti-voting law.”

Biden urged Congress to pass H.R. 1, the “For The People” Act, as well as the John Lewis Voting Rights Advancement Act.

As NHJournal has reported, H.R. 1 would override New Hampshire’s state constitution on voting laws, use public funding for political campaigns, and ban states from requiring identification to cast a ballot, which a vast majority of Americans support.

“Biden is lying about voting subversion to drum up support for HR 1, which would amount to a federal takeover of election law to benefit Democrats,” said Alfredo Ortiz, president and CEO of the Job Creators Network. “Voters are smart enough to look past Biden’s claim that voting integrity measures are a ‘threat to free and fair elections’ and see the truth: Democrats want no election accountability to make it easier for activists to harvest ballots and commit fraud to win elections.”

D. C. Democrats also praised their fellow party members in the Texas House of Representatives, who yesterday staged a walkout of a special legislative session. Those Democrats fled the state, chartering private jets to Washington with a case of Miller Lite in tow, in order to stop new election laws from being passed. Similar to Biden, they called the legislation “Jim Crow 2.0.”

Republicans noted the irony of Democrats using a tactic that allows the legislative minority to thwart the will of the democratically-elected majority,  while simultaneously calling for abolishing the filibuster on a national level to advance their agenda.

But Biden’s indictment went beyond the borders of Texas and Georgia. He accused Republicans in 17 states of enacting “new laws to make it harder for Americans to vote, not to mention — and catch this — nearly 400 additional bills Republican members of the state legislatures are trying to pass.”

That would certainly include New Hampshire.

In some states, it is completely legal for paid campaign workers to go to the homes of voters, collect ballots, and deliver them en masse to elections officials. Critics of ballot harvesting say that the practice opens the door for potential tampering.

The new Texas law would enhance criminal penalties for those paid to harvest ballots for candidates or parties. Since 2019, Georgia has prohibited anyone other than the voter, their relatives, or someone residing in their household from collecting ballots.

Is this part of the “Jim Crow assault?” If so, then New Hampshire is guilty.

New Hampshire has a similar law to Georgia, only allowing family members, or healthcare staff if the voter lives in a nursing home, to collect ballots.

“[Collectors] go to their houses and say, ‘Oh, I make sure your ballot counts. You have to give that back to me right now,’” Gray said. “The problem is people putting undue pressure, and in my opinion, trying to influence people and how they vote.”

And then there’s voter ID.

“I do not think that it’s unreasonable to ask for them to produce an ID,” Gray told NHJournal.

Would this make New Hampshire a “Jim Crow” state?

Gray pointed out that even with the affidavits, there is still some room for fraudulent ballots to be cast.

“If the [affidavit] card is either returned undeliverable or is not returned there’s a provision for the Attorney General’s office to actually conduct an investigation,” said Gray. “But you have not stopped anybody from voting. They still voted and they still cast that ballot.”

In Texas and Georgia, the laws Biden and Democrats are criticizing would add additional voter identification requirements for absentee ballots to ensure those casting ballots are who they say they are. Over the weekend, Vice President Kamala Harris said those laws go too far because rural Americans can’t use a photocopier for their IDs.

“Because in some people’s mind, that means you’re going to have to Xerox or photocopy your ID to send it in to prove who you are,” said Harris. “Well, there are a whole lot of people, especially people who live in rural communities, who don’t – there’s no Kinkos, there’s no OfficeMax near them.”