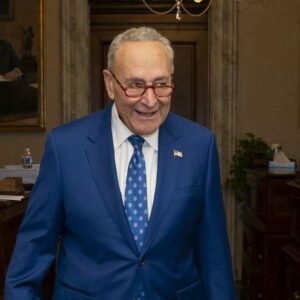 CORRECTION: An earlier version of this story reported the Senate Majority PAC is spending close to $6 million. That error was based on misreading multiple filing disclosures regarding the same spending. A spokesperson for the PAC has confirmed the total spending is $3.2 million. We regret the error.

On Friday, Senate Majority Leader Chuck Schumer’s Senate Majority PAC put more than $3 million in its first ad attacking Morse, New Hampshire’s state Senate president. Despite pushback from both inside and outside their own party, however, Democrats are continuing to spend big to influence the last remaining GOP primaries in competitive general elections.

Morse is believed to be in a two-person race with the frontrunner, retired Gen. Don Bolduc, and attacking Morse is likely to benefit Bolduc.

Bolduc is viewed by political pros on both sides of the aisle as a weaker challenger to face Hassan in a general election, in part because of his far-right public statements and policy positions. In addition to calling popular GOP Gov. Chris Sununu a “Chinese Communist sympathizer” — a comment Bolduc has since walked back — Bolduc also spread the conspiracy theory in 2020 that Bill Gates was using the COVID-19 vaccine to implant chips in American citizens.

“The only bracelets anyone is going to put on me are handcuffs because I’m fighting for my individual rights, my constitutional rights. And the only chip that’s going in me is a Dorito,” Bolduc said in 2020.

Bolduc has since been vaccinated.

Republicans are pushing back with $4.6 million of their own, spent through the newly-formed White Mountain PAC and funded by mainstream Republicans who see Hassan as vulnerable. That theory is fueled by both the Schumer spending, as well as the millions Hassan’s own campaign is already spending. Her ads tout her bipartisanship and willingness to work with Republicans.

Not mentioned in any of Hassan’s current TV ads: President Joe Biden, the Inflation Reduction Act, or the $600 billion student debt bailout.

The Democrats’ interference is “proof positive that Maggie Hassan fears running against Chuck Morse this fall,” said Dave Carney, general consultant for the Morse campaign. “Chuck Schumer’s million-dollar bet will fail, and he will learn an expensive lesson: Don’t mess with NH Republicans. No, Maggie Hassan cannot hand pick her own opponent.”

Murray said yes. “I believe what Democratic supporters are doing is working to make sure that we have a Democratic majority in the United States Senate and the Congress.”

Critics like New York Times columnist Ross Douthat say it shows Democrats do not believe their own rhetoric about Trump’s supporters.

“In the debate about the risks of Republican extremism, the debate the president just joined, it’s still important to judge the leaders of the Democratic Party by their behavior,” Douthat wrote Sunday. “You may believe that American democracy is threatened as at no other point since the Civil War, dear reader, but they do not.”

Democrats are also playing in the Second Congressional District GOP primary, promoting Trump enthusiast Bob Burns over the more moderate Keene Mayor George Hansel. In addition to $100,000 in TV spending by the group Democrats Serve, four mailers targeting conservative voters have been sent anonymously into the district. Contacted by the New Hampshire Attorney General’s office about the mailers, which appear to violate state and federal campaign laws, the vendor refused to disclose the identity of the entity behind the mailers.

The mail shop, Reynolds DeWalt in Massachusetts, is being represented by the law firm of Hillary Clinton’s former attorney, Marc Elias, who was involved in the Russia collusion hoax case.