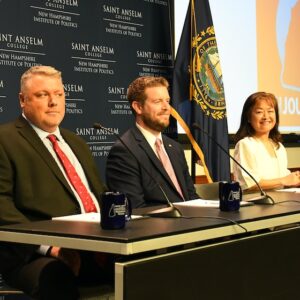 Democrats continue to pour mail into the Second Congressional District GOP primary on behalf of pro-Trump candidate Bob Burns, and now they have added a nearly $100,000 TV ad buy to the mix. It is a tactic Democrats have used across the county to promote Republicans they believe will be easier to defeat in November.

Asked who paid for the mailers, John Doherty, managing partner of Reynolds DeWalt told NHJournal the company “sends so much mail, I can’t answer that question.” Asked about mailing political mail in a federal election, which appears to violate federal election law, Doherty insisted anonymous mailers like these “get mailed all the time.”

In follow-up communications, Doherty refused to reveal the source of the funding for these mailers or the organization ordering them from his firm.

Now a TV ad bolstering Burns’ candidacy among pro-Trump Republicans is airing, with an $87,899
schedule funded by Democrats Serve, a Democratic PAC. Its total spending on Burns’ campaign is more than $100,000 according to FEC reports.

The TV ad features video clips of Burns from the New Hampshire Journal debate declaring himself “the only pro-Trump, unapologetic conservative. I’m against a pathway to citizenship for illegal aliens. I want to build the wall, and I’m an America First candidate.”

During a debate on the Jack Heath radio show Tuesday, Hansel said the Democrats’ ad campaign is evidence they believe Burns is a weak candidate and want him to face off against Kuster.

“Democrats — Democrats — are spending hundreds of thousands of dollars to prop you up because they want you to win this nomination because they know you’ll get crushed in November,” Hansel told Burns, adding, “Democrats are propping up my opponents because they are scared of me.”

Burns claims he is being targeted, not supported, by Democrats, echoing claims made in a statement by the Democrats Serve organization. “We’re running a negative ad against Bob Burns because we want Granite State voters to know that he’s too extreme.”

The New Hampshire Attorney General’s Election Law Unit is looking into the mailings.

If the suggestion that Burns is too extreme to win a general election was expected to temper the enthusiastically pro-Trump candidate in Tuesday’s radio debate, it didn’t work. Burns pledged that, if elected to Congress, he would support a national “fetal heartbeat bill” restricting abortion at the federal level.

“The Supreme Court didn’t rule that abortion is a state issue. They ruled that it’s not protected by the Constitution,” Burns said. “The [federal] government has to decide what is life.”

Lily Tang Williams used the debate to list the conservative organizations that have endorsed her candidacy, including the National Tea Party, the New Hampshire Conservative Majority Project, and Dartmouth College Republicans.

And, Williams said, the right way to defeat Kuster is to nominate a Republican woman to take her on. “It takes a woman to beat Annie Kuster, especially a minority woman who lived under Communism, to call out her policies.”

The NH-02 GOP primary offers perhaps the clearest choice between the two different views of Republican campaigns. Burns argues the key to success is to nominate a candidate who will energize the Trump base and get them to the polls. Hansel’s approach is to give voters a less strident candidate who can appeal to independent voters.

“Not in New Hampshire,” Hansel replied.