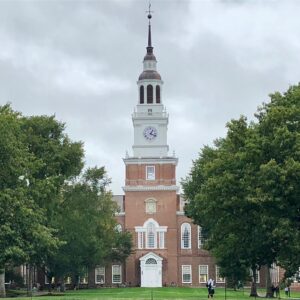 Dartmouth College’s standing as a campus that supports diversity of opinion and expression fell again this year, down 20 places in the newest ranking of campus free speech from the Foundation for Individual Rights and Expression (FIRE).

Earlier this month, FIRE released its findings from “the largest survey on student free expression ever conducted.”

“That so many students are self-silencing and silencing each other is an indictment of campus culture,” said FIRE Senior Research Fellow Sean Stevens. “How can students develop their distinct voices and ideas in college if they’re too afraid to engage with each other?”

Or, as the report concluded, “Sayonara, debate and disagreement; hello, campus kumbaya.”

New Hampshire’s Ivy League school pulled a Gentleman’s C in last year’s ranking, coming in at number 63 in the nation. But this year, Dartmouth dropped even lower, to number 83 — below the state universities of Idaho, Indiana, and Alabama.

And while the University of New Hampshire fares far better at number 16, which was a drop from number three last year.

“The University of New Hampshire remains steadfast in its commitment to the principles of free speech and academic freedom and are pleased to know FIRE recognizes our work to protect these freedoms while encouraging openness and civility,” said Erika Mantz, executive director for UNH Media Relations.

FIRE reports college students and faculty at schools across the country face extreme challenges to the free expression of ideas.

“Alarming proportions of students self-censor, report worry or discomfort about expressing their ideas in a variety of contexts, find controversial ideas hard to discuss, show intolerance for controversial speakers, find their administrations unclear or worse regarding support for free speech, and even report that disruption of events or violence are, to some degree, acceptable tactics for shutting down the speech of others,” the report states.

Dartmouth’s administration did not respond to a request for comment, but students who anonymously reported to FIRE say the school campus is ruled by “mob mentality” and students live in ideological echo chambers. According to FIRE, for every one conservative student, there are roughly 4.3 liberal students.

“Mob mentality situations occur all the time in a small campus like Dartmouth. From minimal things to huge issues, there is a main way of thinking that if you do not conform to, you are alienated,” one student said.

Another student said they feel uncomfortable confronting the racism they experience at the school.

“I am a person of color who often has to hear White people make comments that come off as tone deaf or performative and I do not feel comfortable saying something about it,” the student said.

One student told FIRE they are unable to express their support for the nation of Israel due to fears over anti-semitism.

“Sometimes feel stigma against saying that I support Israel. People paint it as being against human rights and I’ve personally seen antisemitism attached to the subject occur on college campuses,” the student said.

According to FIRE’s report, only 27 percent of Dartmouth students say shouting down a speaker to prevent them from speaking on campus is never acceptable. At UNH, that number is 44 percent. Both represent a minority of students.

FIRE’s Vice President of Research, Adam Goldstein, said schools need to set the example early in the school year that free speech is the norm on campus.

“FIRE’s top-ranked school, the University of Chicago, starts by sending letters to incoming students explaining the value of free expression,” Goldstein said. “Reinforcing those messages through orientation programs and official policy statements makes sure the message lands. Reforming any anti-speech policies, like restrictive protest or internet use policies, will show students that the administration is walking the walk. And FIRE is ready to help with all of that.”

FIRE got involved at Dartmouth last year after allied threats of protestors shut down a planned speech by conservative speaker Andy Ngo at Dartmouth College.

Dartmouth canceled the Jan. 20 event hosted by the campus chapters of the College Republicans, Turning Point USA, and Network of Enlightened Women, forcing it online because of unspecified “concerning information” from the Hanover police.

However, documents obtained by both NH Journal and FIRE indicate police never thought that the planned protest presented a credible threat.

Goldstein said students should know they have options to protect their speech, and that FIRE will help.

“Students who feel their rights aren’t being respected can call FIRE for help–that’s the easy answer here and it’s never the wrong answer because even if we can’t help in a specific situation, we might have some ideas about who can. But generally speaking, the first step is going to be to go to the administrator, board, or student group that’s not respecting those rights and ask them to reconsider,” he said. “Most speech restraints are created by well-intentioned people focused on something other than freedom of speech and bringing speech to their attention can go a long way.”