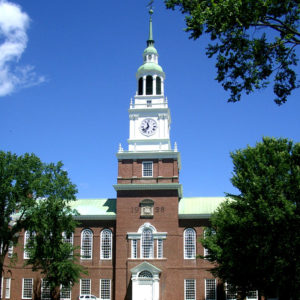 The Foundation for Individual Rights in Education (FIRE) tells NHJournal it has launched an investigation into Dartmouth College’s decision to shut down an appearance by conservative journalist Andy Ngo in the face of threats of violence from Antifa.

“Threats of violence are never an appropriate response to speech you oppose and must not dictate who may speak, or what may be said, on a college campus. Universities should not reward those who threaten violence by canceling controversial speakers,” said FIRE Program Officer Zach Greenberg.

The ACLU of New Hampshire, however, is choosing to remain silent.

Ngo and former Antifa activist Gabe Nadales were scheduled to discuss extremism in America Thursday night on the Hanover, N.H. campus. The event was hosted by the Dartmouth College Republicans and the conservative activists at Turning Point USA. Ngo has built a national reputation covering violent, far-Left protests, events often ignored by the mainstream media.

The college security officer told a reporter for NHJournal Ngo’s appearance was canceled, and the event would be held online, but he would not say why the change was made.

Lawrence said 94 people signed on to attend Ngo’s event virtually. There was no visible presence of protestors Thursday night. A pair of men turned away at the doors, who appeared to be in their 30s and 40s, respectively, said they were on the college campus to attend the event. They declined to answer any further questions.

“The administration canceled the event and gave the student organizers the choice of holding a last-minute zoom meeting or nothing at all,” Ngo told InsideSources. “An event on violent extremism was threatened by violent extremists. It’s a cliche. Why did the College wait until two hours before the event to drop the ultimatum on organizers and speakers? Dartmouth College’s decision actually gives a blueprint for extremists to shut down future events.”

Greenberg said FIRE plans to investigate the threats and the cancellation. He said the college needs to tell the truth about what, exactly, happened.

“While we appreciate that Dartmouth’s administration has facilitated an online version of this event, initially intended to take place in person, we must remain vigilant against universities citing safety concerns as a pretext to censor unpopular expression, and must ensure that those seeking to impose a “heckler’s veto” cannot succeed in doing so,” Greenberg said. “Dartmouth must be transparent by identifying the concerns that led to the cancellation of the planned event, the steps it took to address those concerns, and why it decided that the event could not take place as planned.”

University administrators silencing speech was once an issue almost certain to inspire action by the American Civil Liberties Union. But in recent years, the one-time civil rights advocacy group has abandoned its free speech mission, the New York Times reports.

Gilles Bissonnette, Legal Director at the ACLU of New Hampshire, did not respond to requests for comment.

In the days leading up to the event, members of Antifa organized a counterprotest, with some making threats to stop Ngo at all costs.