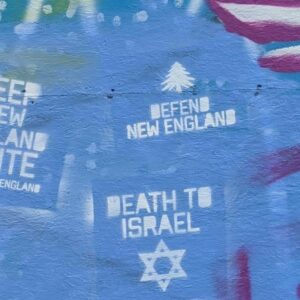 What about the Jews?

American politics is obsessed with identity. Every event, every tweet, every YouTube video is viewed through the prism of race, of ethnicity, of sexual identity. The obsession is so extreme that when a three-time Jeopardy champion flashed three fingers during his final appearance, paranoid race-identity police wrongly declared it a secret symbol of white supremacy.

So high is the fever in our identity-politics swamp that, despite the allegation being completely debunked, people smart enough to win Jeopardy are still pushing the white-supremacist myth.

Which is why the reaction to graffiti posted in Nashua by a self-declared white supremacist group has been so…odd.

Rep. Manny Espitia (D-Nashua) posted a photo of the messages on Twitter: Some group of basement-dwelling knuckledraggers calling itself NSC-131 had painted “Keep New England White,” “Defend New England” and “Death to Israel” in his community.

Espitia tweeted, “Don’t ever tell me that racism doesn’t exist in NH.”

Someone claiming to represent the group responded on the social app Telegram:

“Anyone with a name like ‘Manny Espitia’, State Rep or not, has no moral right to throw shade at any true (White) Nationalist New Hampshirite. You have no right to be here, you’re an occupier here and the days of these types trampling on New England are coming to an end.”

That single message, likely from out of state (“New Hampshirite?” Please.), inspired a surge of media coverage from WMUR, the AP, even Newsweek. Espitia pledged not to back down to the hate, and New Hampshire politicians from both sides of the aisle condemned the threat and defended the Nashua Democrat.

But what nobody did was reference in any way the glaring fact that the only ethnic group singled out by these haters was…the Jews.

Almost nobody in the identity-politics-obsessed Democratic Party referenced it in any way. In fact,  Newsweek’s coverage of the incident left out the “Death to Israel” statement entirely.

A “Death to Israel” hate crime would seem to the untrained eye as rather “newsy,” given that anti-Semitic attacks have surged almost 40 percent in recent weeks. And while it’s right to get angry over a single racist message on a relatively small social platform targeting one New Hampshire state representative, the Anti-Defamation League reports finding 17,000 tweets with variations of the phrase “Hitler was right” in one week alone.

And that doesn’t include the millions of other anti-Israel or anti-Semitic smears on social media in the past month, including from New Hampshire progressives.

The ADL also reports a spike in allegedly anti-Semitic incidents since Hamas rockets sparked the latest battle in the Middle East. Jews remain by far the most likely group to be targeted for hate crimes, FBI data show.

So when “Death to Israel” pops up in Nashua, why wouldn’t New Hampshire Democrats pounce on the opportunity to denounce it? Why wouldn’t local media grab that obvious news hook and run with it?

One problem is Espitia.

Omar was in New Hampshire campaigning for Sen. Bernie Sanders, whose campaign was riddled with anti-Semites and anti-Israel activists. Sanders was the top pick of Granite State Democrats, none of whom spoke out publicly about his campaign’s well-publicized anti-Semitism problem.

But what’s as fresh as today’s headlines are the attacks from Democrats on Israel, including the hate-mongering (and false) smear of “apartheid state” from Omar and her fellow members of “The Squad”  even amid the violence both in the Middle East and here at home.

In New York City’s Times Square, a mob of keffiyeh-wearing assailants kicked a Jewish man nearly into a coma in broad daylight. A truck full of anti-Semitic thugs was hunting Jews at L.A. restaurants. A Jewish family in Miami was pelted with garbage and subjected to vile slurs as they left a synagogue

And yet even when the phrase “Death to Israel” appears on the streets of Nashua, New Hampshire Democrats have nothing to say about it?

If “silence is violence,” as progressives insist, then Granite State Democrats are an MMA cage match.

It’s easy to dismiss concerns about anti-Semitism in a state with such a small Jewish population (about 10,000 or so) and where hate crimes against any minorities are, thankfully, rare. But Democrats like Espitia keep saying the “hate is here.” They use the hashtag #NHIsNotInnocent while hosting rallies to protest anti-Asian hate crimes where literally none have been reported. Why the double standard?

Perhaps because New Hampshire Democrats are following their voters’ lead. According to a new Economist/YouGov poll, while 61 percent of Republicans sided with Israel in the recent fighting, just 16 percent of Democrats felt the same. A Morning Consult poll found similar results: Among Democrats, 18 percent sympathized with the Palestinians, 36 percent sympathized with both sides, and just 12 percent backed Israel.

What’s the upside for elected Democrats to stand with Israel, or to even mention the issue of anti-Semitism — except to attack the NHGOP over a couple of unknown NHGOP state reps who cluelessly shared anti-Semitic cartoons? Even from 500 miles north up I-95, it’s obvious the energy among D.C. Democrats is with younger, anti-Israel progressives like AOC and Rep. Cori Bush, not the party’s Matlock-demo leadership.

The Granite State standouts are U.S. Sens. Jeanne Shaheen and Maggie Hassan, who posted their support for Israel on their Twitter feeds. All they got in return was hate from the state’s progressive activists. U.S. Rep. Chris Pappas hasn’t mentioned the attacks in his Twitter feed, instead posting a “press release” on his website that he never apparently “released” — he never sent out a copy to the New Hampshire press or mentioned it in his social media.

Meanwhile, Kuster’s silence, along with her support for The Squad, make it pretty clear where her sympathies are.

As Noah Rothman of Commentary Magazine put it, “Street violence targeting American Jews is on the rise across America. It is being provoked and condoned by progressives within the Democratic establishment, and the party is doing nothing about it.”

Not even when the “Death to Israel” graffiti comes to Nashua.