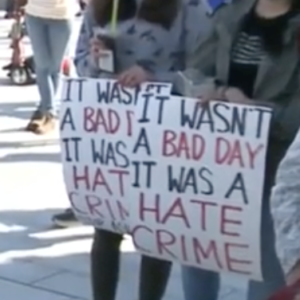 Does New Hampshire Have A Hate Crime Problem? The Latest Numbers Say ‘No.’

On Sunday, hundreds gathered in Concord to protest hate crimes against Asian-Americans. While the nation has reacted with horror to the murders of eight people — including six women of Asian descent — in Atlanta, Wei Lin, president of the Chinese Cultural Society of Greater Nashua, says anti-Asian hate is a problem right here in New Hampshire.

“It’s very worrisome, and we’re starting to fear for our safety,” Lin told WMUR, adding that “there is more discrimination against Asians, particularly Chinese people, in lieu of the coronavirus,” the station reports.

In June, the Statehouse was also the site of a Black Lives Matter protest against racism targeting African-Americans. It was part of a series of rallies and protests sparked by the horrific death of George Floyd at the hands of a White Minneapolis police officer. That officer, Derek Chauvin, is currently on trial in Minnesota.

“New Hampshire is not innocent,” was the message at the BLM rally, with multiple speakers arguing that racism is a significant problem in the Granite State.

Those concerns continue. The Manchester public school system recently sent emails mandating anti-white-privilege training for all employees of their 21st Century Learning program. When questions were raised about the training –which equated whiteness with inherent bigotry and white supremacy — the mandate became a suggestion. Still, by urging employees to take the training, the school system is indicating its concern about the extent of racism in its midst.

Are these concerns grounded in facts? Do Asian Americans and people of Asian descent have reason to fear in New Hampshire? Are people of color targets of hate in the Granite State?

Based on the most recent numbers available, the answer is “no.” In fact, the number of hate crimes in the state has plunged by 60 percent.

The total number of race-based hate crimes reported in New Hampshire in all of 2019 — three years into the allegedly racism-inspiring Trump presidency? Eight.

The total number of all hate crimes in New Hampshire? Seventeen.

This in a state with a population of 1.3 million people, more than 90 percent of whom are white.

That’s according to the latest FBI’s crime statistics. Those same statistics show the number of hate crimes fell by 60 percent during the Trump years, from 40 incidents in 2016 to the 17 reported in 2019.

Once again, those are the latest numbers, but they’re from 2019. The premise of this weekend’s protests was that 2020 experienced a major spike in attacks on people of Asian descent due to animosity inspired by the COVID-19 pandemic. They also blame former Pres. Donald Trump’s repeated highlighting of China’s role in the spread of the deadly virus that originated in Wuhan province.

It’s possible these activists may be right. There may have been a surge of anti-Asian hate last year. But once again, the available data don’t support this fear.

The best data I’ve found for 2020, the salient period for this discussion, are provisional data on complaints and arrests for hate crimes against Asians in New York City, one of two cities which seem to have been most affected. They record 20 such arrests in 2020. Of those 20 offenders, 11 were African American, two Black Hispanic, two White, and five White Hispanics. Of the Black offenders, a majority were women.

Sullivan points to an annual report of anti-Asian hate “incidents” (as opposed to crimes) from the Center for the Study of Hate and Extremism. They list 122, in a nation of 330 million people. Once again, each incident is disturbing — name-calling, threats, insults, etc. — and should be immediately condemned.

And if there is an increase in violence against Asians in the 2020 statistics when they are released, Charles Fain Lehman of the Manhattan Institute testified last week those numbers need to be viewed in the context of a surge in violent crime overall:

Criminologist Jeff Asher has estimated that 2020 saw the largest one-year spike in homicides on record, as murder increased by more than 30 percent in nearly 40 major cities. New data indicate the trend has persisted into early 2021.

That pattern appears in cities where Asian residents are being attacked. In San Francisco, homicide was up 17 percent over 2019. In New York, homicides rose 40 percent, while shootings nearly doubled. In Oakland, 2020 saw the highest homicide rate in eight years, and the city is already on track for a worse 2021. With 157 dead, the Atlanta Journal-Constitution called 2020 “the city’s deadliest [year] in decades.”

In other words, the narrative that people of color — in New Hampshire or the nation as a whole — must live in fear of white supremacist violence simply doesn’t match the data.

In fact, there’s still no evidence that the horrific murders in Atlanta were race-based hate crimes. It’s certainly a possibility, but it’s far from proven. As of this writing, there’s more publicly-available evidence the killer’s motive was a twisted form of puritanism and sexual self-loathing. And yet, attendees at Sunday’s rally likely had no idea the motive for the shootings was still in question.

One sign of how the narrative has come unmoored from the facts: At least two attendees held up signs reading “It Wasn’t a Bad Day, It Was a Hate Crime.” This is a reference to a now-debunked suggestion by a Vox.com employee that a Georgia police officer said the shooter was “just having a bad day” when he gunned down the spa workers. In fact, the officer was simply reporting the shooter’s own statements about the killings, not the officer’s thoughts on the crime. This disinformation has yet to be retracted or corrected by Vox.com.

That doesn’t mean the shooter isn’t a racist. It doesn’t mean there aren’t white supremacists or that they don’t commit crimes. But it does raise public policy questions, like why is the Manchester School District urging employees to sit through webinars accusing all White people of being complicit in a system of white supremacy if there’s no evidence of a significant problem?

NHJournal has asked MSD to provide any evidence of a racism problem among their employees. They have declined to do so.

A state where race-based hate crimes are so rare they can be counted on your fingers sounds like good news, not bad. A nation of 330 million people where hate crimes against Asians are extremely rare — and even rarer than a generation ago — also sounds like progress.

So why is the conversation about race dominated by claims of white supremacy and anti-Asian hatred? And how do these unfounded suggestions help a state like New Hampshire craft the best public policy for all of its citizens?