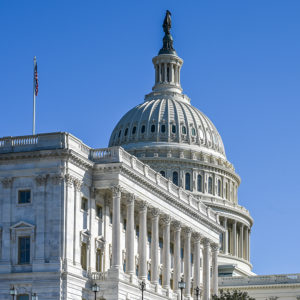 Senate Democrats are changing key components of their massive election reform legislation, the For the People Act, in an effort to appease key stakeholders who have voiced strong opposition to some aspects of the law.

The Washington Post reports that Democratic leaders, including President Biden, House Speaker Nancy Pelosi (D-Calif.), and Senate Majority Leader Charles E. Schumer (D-N.Y.), have made passing H.R. 1 a top priority. But, the paper also notes, Democrats know they don’t have the 60 votes needed to move the bill forward, and there are real doubts the party could muster even 50 votes at this point.

And so Senate Democrats have begun tweaking the bill in hopes of building support. However, the two most controversial aspects of the Democrats’ plan — publicly-funded campaigns and a ban on voter ID mandates — are expected to remain. Polls show Americans overwhelmingly support voter ID requirements, including a majority of Black voters, and taxpayer-funded campaign attack ads aren’t popular, either.

While both Democratic Reps. Annie Kuster and Chris Pappas have already voted for the original bill twice, and both Sens. Maggie Hassan and Jeanne Shaheen have expressed their support for the bill as is,it faces strong opposition in New Hampshire.

Bill Gardner, a New Hampshire Democrat and the longest-serving Secretary of State in the country, has been one of those local stakeholders heavily opposed.

“I am deeply troubled and concerned about the direction some in Congress would take the states in terms of the conduct of elections,” said Gardner while testifying against the bill before the U.S. Senate last month. ”Unjustified federal intrusion into the election process of the individual states will damage voter confidence, diminish the importance of Election Day itself and ultimately result in lower voter turnout.”

One of Gardner’s main concerns is federal overreach into something he sees as a state issue.

“It would just be a federal takeover of the election process in New Hampshire. So instead of the New Hampshire legislature, the House and Senate, deciding how our elections should be here, this is going to be a federal decision,” Gardner said.

As NHJournal has reported, local elections officials in New Hampshire have been particularly concerned with extra burdens that the legislation would impose upon them.

In an information session led by Deputy Secretary of State David Scanlan on H.R. 1 last month, several local elections officials shared their thoughts on the extra burdens, although it is unclear whether the proposed changes will appease them.

“To extend the voting requirements to several days, several hours a day, we just don’t have the staff to carry something like that,” said one official.

One of the proposed changes currently under discussion would give states or local jurisdictions more time or more leeway to implement mandates like early voting. However, New Hampshire and the other states would still have to conduct at least 15 consecutive days of early voting. With the new changes, some exemptions will be possible for municipalities with less than 3,000 voters.

“We use our local high school gymnasium as our primary voting site; we couldn’t lock that down for two weeks prior to the election for early voting,” said another New Hampshire election official.

It is unlikely the changes will appease enough Senate Republicans or even hesitant Democrats to vote for the effort. An aide to Senator Joe Manchin (D-WV) told the Washington Post the Senator “believes any election reforms must be done in a bipartisan way.”

Facing unified opposition from the GOP, it appears this legislation will not meet Manchin’s standard of bipartisanship.

Hassan and Shaheen declined to respond to questions about whether they support the proposed changes to H.R. 1.