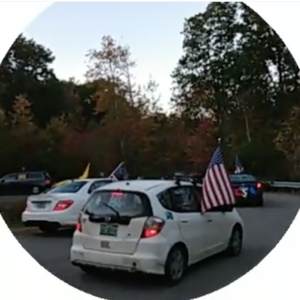 Dozens of cars and trucks draped with American and Gadsden flags drove around outside Osborne’s residence, blaring horns and playing loud siren-style sounds.

Some protesters mistakenly believed they were protesting the home of the Speaker of the House. That post is held by Rep. Sherman Packard of Londonderry.

“Outside of Speaker of the House (sic) Osborne’s residence in Auburn,” one protestor said in a video posted online. “Lot goin’ on right now, lot goin’ on.”

At issue is a $27 million grant from the federal government designed to help boost vaccination rates and the nine people arrested last week protesting against that funding. On Wednesday, New Hampshire became the only state in the union to refuse the federal funds.

While Gov. Chris Sununu publicly admonished the Republican-led Executive Council for declining the federal giveaway, Osborne has consistently been an outspoken opponent of vaccine mandates. When New Hampshire Democrats publicly decried the council’s 4-1 vote to refuse the funds, Osborne released a statement mocking them.

“The Democrats’ fustian can only be reconciled within the context of blind authoritarian indoctrination. It is ironic that these representatives have claimed to not want to invade people’s privacy, but openly advocate for policies to force employees to be vaccinated or lose their job,” Osborne wrote.

“Whether it is using blatant coercion or threatening to monitor your bank accounts for transactions over $600, the Democrat Party has made it evident that there is no limit to how many of your liberties that they intend to trample on when given the opportunity.”

So, why were vaccination and mandate opponents protesting his house?

“Jason is compromised and is now the target,” wrote a participant on the RebuildNH Telegram chat group. “He is not for the freedom people of New Hampshire unless he calls for the resignation or impeachment of Sununu immediately.”

“And, Jason’s address is public record!”

The claim, according to this user, is that Osborne said the nine people arrested at the Executive Council meeting “probably deserved it,” and “should have been locked up a long time ago.” Others complained the Majority Leader had allegedly called the more aggressive protesters “a-holes.”

“The safety commissioner told me the arrestees disrupted the meeting,” Osborne wrote in a Facebook thread. “I have no reason to not believe him. Luckily for us all, I am not a judge and this is not a court. The truth will come out.”

The RebuildNH organization is viewed as a fringe group of extremists outside the political mainstream, opposing a vaccine taken by nearly 80 percent of voting-age Granite Staters. In addition to helping organize the Executive Council protest at which state employees were threatened and had to be walked to their cars by law enforcement, they’re repeatedly — and falsely — claimed the vaccine has killed more than 15,000 people in the U.S. Their source is the same as the bizarre “Vaccine Death Report” document distributed by Rep. Ken Weyler (R-Kingston), a conspiracy-theory manifesto that posited a secret papal plot for world control and the existence of “creatures with tentacles” in the vaccine.

Protesting private homes has become more common on both political extremes. Progressives have protested outside the private homes of Republican Sen. Mitch McConnell (Ky.) and Democrat Sens. Krysten Sinema (Ariz.) and Joe Manchin (W.V.). Sununu’s home and neighborhood have repeatedly been targeted by RebuildNH activists and their allies.

“I am just glad my neighbors were so busy watching the Pats game that they couldn’t be bothered by the distraction,” the Majority Leader said. “Perhaps if these folk do not wish to be called ‘a-holes,’ they should stop acting like ‘a-holes,’ showing up to homes blaring sirens and screaming profanities through a bullhorn.”

EDITOR’S NOTE: The reference to a RebuildNH Telegram conversation has been clarified from the original version of the article. The person making claims about Osborne may or may not have been an actual member of RebuildNH.