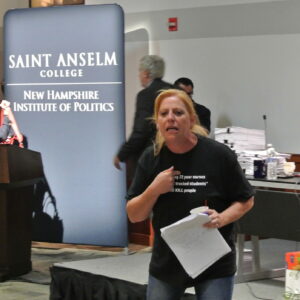 Amid shouts of, “We know where you live,” a mob of angry, anti-COVID-19-vaccine protesters forced the cancellation of Wednesday’s Executive Council meeting before it could get started.

Anti-vax activists associated with the group ReOpenNH were protesting the Council’s consideration of a $27 million contract to expand the state’s efforts to promote and distribute the vaccine.

The dozen or so protestors effectively took over the meeting, roaming among the attendees shouting complaints about access to Ivermectin for COVID-19 treatment, repeating false claims of “thousands of deaths” from the vaccine, and warning vax supporters they would be treated the way Nazis were treated after World War II.

“You’re going to be held accountable,” one woman cried. “Maybe not now, but years from now — Nuremberg trials!”

After 40 minutes or so of protesters stalking the room and shouting their grievances, Councillor Dave Wheeler, R-Milford, announced the meeting was being canceled.

State employees were then escorted from Saint Anselm’s New Hampshire Institute of Politics where the meeting was being held.

Wheeler said a number of state employees felt unsafe at the meeting and left. Since those employees are needed to answer questions from the council members, the meeting could not take place.

“Mission accomplished,” one protester shouted as the news was cheered.

Councilor Cinde Warmington, D-Concord, said New Hampshire Department of Health and Human Services Commissioner Lori Shibinette made the decision to have her staff leave as the protesters grew increasingly agitated. Staffers were escorted to their cars by New Hampshire State Police troopers.

When the DHHS employees left the auditorium, the situation in the room got worse.

“Once that happened, we got reports from State Police and the Commissioner of Safety that the room had become more disruptive and they felt it had become unsafe,” Warmington said.

Democrats were quick to blame Gov. Chris Sununu for the mob, with Senate Democratic Leader Donna Soucy, D-Manchester, saying his hands-off approach to the pandemic since this summer and his support of anti-vaccine initiatives have given cover to extremists.

“Today’s Executive Council meeting was an alarming demonstration of the dangerous and reckless behavior that has been allowed to manifest under Governor Sununu and the elected Republican majorities. It is long past time that the Republican leadership of this state stop coddling extremists who continue spreading misinformation and threatening the lives of our state employees to score political points. This has gone on for far too long and needs to be stopped, now,” Soucy said.

During a press conference later in the day, Sununu condemned the protesters for “crossing a line.”

“We had to have state police escort Department of Health and Human Services employees to their vehicles. Just think about that for a second,” Sununu said. “That is not what New Hampshire is about.”

“You had Democrats today [saying] we’re somehow riling up the crowd that’s actually threatening me and my team. That makes no sense at all,” Sununu said. He also mentioned the fact these protesters had also targeted him at home in the past, too.

“Any Democrats trying to throw that type of criticism our way — shame on them. This is a serious situation.”

If the protesters’ goal was to stop the state from accepting the contract, they appear to have failed. Sununu is promising to bring it up again at a re-scheduled Executive Council meeting and in a venue with more security. By mid-afternoon, legislative leaders from both parties had issued statements denouncing the protests.

Asked by NHJournal how Wednesday’s events helped their cause, state Rep. Melissa Blasek (R-Merrimack), executive secretary of RebuildNH, the anti-vaccine group that helped organize the protest, acknowledged they didn’t.

“People are understandably very upset and what you saw today was raw emotion, but it is not the productive activism we advocate for,” she said.

Temperatures do not appear to be cooling over the vaccine issue.

“The most frightening thing I’m hearing from these people is that they are anti-government, period. They want to shut down the government. This is the kind of behavior that led to Jan. 6,” she said. “They clearly have no idea how the government runs and how our state operates. It’s truly anti-American.”

“I’ll take a lead injection before I take this vaccine injection,” Manuse said.