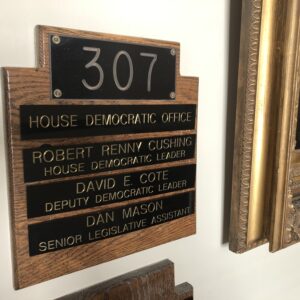 With Cushing’s Passing, Who Will Lead House Dem Caucus?

CONCORD — New Hampshire Democrats face a difficult dilemma in the wake of the death of House Minority Leader Renny Cushing: Fight or flight?

Do Democrats hold a vote to pick a new leader, which would almost certainly lead to a divisive leadership fight; or do they stick with acting Minority Leader Rep. David Cote (D-Nashua) and ride out the rest of the session?

What most voters probably don’t realize is that by state law, Democrats do not get to pick their leader. Under New Hampshire’s Constitution, the authority to name the leaders for both parties rests not with the party caucuses, but with Speaker of the House Sherman Packard (R-Londonderry).

“Technically, it’s up to the Speaker,” said Secretary of State David Scanlan. “But how we get there is up to the Democrats.”

Democrats can vote for a leader, but the choice has to go through the Speaker of the House.

“The minority caucus has to determine what they are going to do,” said Clerk of the House Paul Smith. “But there’s nothing in the rules that [says] the Speaker has to name anyone to anything.”

When Republicans lost their leader, Rep. Dick Hinch, to a COVID-related illness just over a year ago, they didn’t face this situation because he was Speaker. The position is elected by the entire House and there are clear rules in the Constitution and state law about picking a replacement.

Smith said when there has been a death of a party’s leader in the past, the party has chosen to keep the acting leader in place for the remainder of the session. Given there are just a couple of months left in the current legislative session, Smith said Democrats could keep Cote in place for the time being.

Packard was not available for comment on Tuesday, and Cote did not respond to a request for comment.

Former House Speaker Shawn Jasper said he could not recall any past Speaker ignoring the wishes of either party when it comes to picking leadership.

While Democrats could keep Cote in place, Jasper said, much legislative work remains to be done in Concord and the party might want to hold a leadership vote.

“What complicates the matter here is that (Cote) has not been coming to the State House. It will be very difficult for him to be effective for the next couple of months. He needs to be on-site,” Jasper said.

According to multiple sources inside the Democratic caucus, Cote is “terrified of COVID,” and as a result has refused to attend any in-person gatherings.

“You can’t run the caucus from your basement,” one concerned Democrat told NHJournal.

Greg Moore, who served as the chief of staff for the New Hampshire House of Representatives, said it has been a difficult couple of years, with both parties losing their leaders.

“It’s been a tough legislative session for the House,” Moore said.

Moore thinks Democrats are likely to hold a leadership vote in the coming weeks. Cushing was well-liked on both sides of the aisle, and he had the ability to lead. That is something Democrats will miss.

“When you lose your leader, you want to have somebody who has the force of the vote,” Moore said. “That gives the caucus a lot of confidence.”

If there is a caucus in the coming weeks, Moore said the candidates who ran against Cushing last time are likely to be top contenders. Rep. Matt Wilhelm (D-Manchester) and Rep. Marjorie Smith (D-Durham), who both challenged Cushing for the Minority Leader post, did not respond to requests for comment.

Moore said the ultimate decision will be made by the members.

“It’s up to the caucus what they want to do,” Moore said.