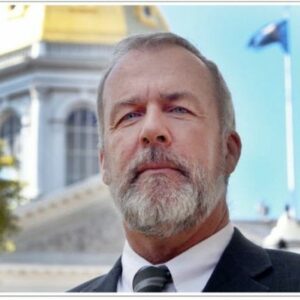 Cushing Steps Down Due to Health Concerns, Receives Outpouring of Bipartisan Support

House Minority Leader Rep. Renny Cushing (D-Hampton) announced Wednesday he is taking a temporary medical leave of absence as he continues his battle with stage four prostate cancer, sparking an outpouring of affection and support from both sides of the aisle.

The announcement was made via a letter read by his daughter Marie during a House Democratic caucus meeting.

“With great reluctance, I am following the advice of my doctors and will be taking a medical leave of absence from the position of House Democratic Leader. I have fought my entire life for the people of New Hampshire and served in the legislature for more than 30 years – but for now, I need to focus on another fight. During my leave of absence, Deputy Leader David Cote will assume the duties of Democratic Leader, and longtime legislative leader Rep. Mary Jane Wallner will step in as the Deputy Democratic Leader,” the letter read.

“As a legislator, a passionate advocate for all Granite Staters, and a dear friend, Rep. Cushing has taken on some of New Hampshire’s most significant civil rights battles,” his state Senate counterpart Sen. Donna Soucy (D-Manchester) said. “I am honored to have worked alongside him for so many years and now, I am proud to continue to stand by him as he takes on this next fight.”

Cushing is known both for being a hard-charging liberal partisan — he ordered his caucus to blackball this publication — and for his ability to make personal connections beyond partisanship.

“Leader Cushing is a well-respected member of the New Hampshire House of Representatives and a dedicated public servant,” Speaker of the House Sherm Packard (R-Londonderry) said in a statement. “I wish him the best as he takes this time to focus on his health and be with his family and loved ones.”

“As Renny Cushing takes this time to focus on his health, Valerie and I join with so many here in the Granite State in wishing he and his family well. Our prayers are with you, Renny,” Gov. Chris Sununu said.

Greg Moore of AFP-NH, also known for being a committed partisan from the political right, tweeted: “Godspeed, Renny. Best of luck with this fight.”

“Agree, disagree with Renny Cushing, there is no question/debate about his dedication to public service in NH,” DiStaso tweeted. “One of the first people I met after relocating to NH in ’79, covering him during the Seabrook nuke protests. Sincerest prayers/best wishes are sent your way.”

While the top concern is Cushing’s health, House Democrats privately tell NHJournal they’re concerned about the current team’s ability to lead the caucus. Cote is widely viewed as a weak leader whose lack of political skills is amplified by his refusal to attend sessions in person.

Cote has yet to cast a vote in the House since before the 2020 election, critics note.

“You can’t run the caucus from your basement,” one concerned Democrat told NHJournal.

Progressives are also concerned about losing Cushing because they fear the result will be a more moderate leader who won’t reflect their priorities. The speculation is Cushing’s “temporary leave” is just a tactic to keep the House from having a divisive leadership fight.

The good news, several House Democrats said, is Wallner (D-Concord) is widely respected and, serving her 21st term in the House, has the experience to lead.

“She’s one of my favorite House members and easily the most powerful House Democrat,” one legislator said. “She is thoughtful, kind, and low-key. An interesting counter to [House Majority Leader] Jason Osborne.”

“All Granite Staters should know one thing– House Democrats will continue our unwavering resolve for you against radical Republican extremism in Concord.”