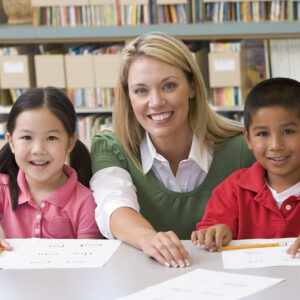 Students are heading back to school, and based on media reports you might expect them to be sitting in classrooms without a teacher. News organizations nationwide have published stories raising alarms about dire school staffing shortages.

So why do hiring and staffing data tell a completely different story?

The New Hampshire Department of Education announced in July that teacher credential renewals were up this year, not down.

The state renewed 8,350 educator credentials through mid-July 2022, vs. 8,232 at the same point last year. Since 2020, the number of credentialed teachers in the state has increased by about 300.

“There is no national teacher shortage,” The Atlantic reported last week.

The Washington Post has warned of a “catastrophic teacher shortage.” ABC World News Tonight called it a new “growing crisis,” and Rebecca Pringle, the president of the National Education Association, called it a “five-alarm” fire.

And yet, reporter Derek Thompson checked the numbers and found…

In parts of the country, schools are struggling to hire staff. But they are mostly the same districts that have been struggling for years to fill the same positions, such as substitute and special-ed roles. In the big picture, the new and catastrophic national teacher shortage is neither newly catastrophic nor, in any meaningful sense, national. Under one interpretation of the murky data, the country might even have a teacher surplus on its hands, because so many parents have pulled their children out of public schools since the pandemic began.

“There has not been a mass exodus of teachers across the country,” Heather Schwartz, a senior policy researcher at the Rand Corporation, told me. Chad Aldeman, who writes about education finance at Edunomics Lab, agrees. “The public narrative has gotten way ahead of the data and is even misleading in most cases,” he told me.

A new study from the Annenberg Institute at Brown University has found that teacher turnover rates are about the same as they were before the pandemic.

“After roughly a half-decade of steady growth, total public school jobs decreased by roughly 9% through May 2020. The initial drop represented more than twice the number of positions erased during the financial crisis of 2008,” education news website The 74 reported on Monday.

“But the data also suggested that those positions were disproportionately cut from non-teaching ranks. Occupational records from both national and state sources showed measured declines among nurses, administrative support staff, paraprofessionals and other predominantly non-instructional employees.”

Journalists are trained to gather anecdotes, not data. They interview a few people in a few districts who say it’s been really hard to find staff. And — voila! — there’s a big shortage.

Unfortunately, journalists are less inclined to double-check anecdotes that appear to confirm conventional wisdom or a generally left-of-center narrative. And most journalists aren’t well trained to gather and analyze data on their own.

That leads to a lot of bad reporting about trends. Maybe some reporters need to go back to school too.