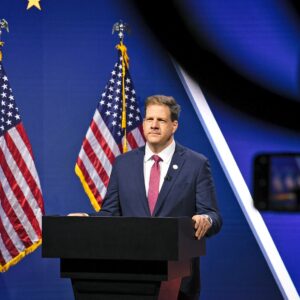 It may have been a Washington event for D.C. insiders, but it was New Hampshire Gov. Chris Sununu who stole the show at the return of the annual Gridiron Club dinner Saturday night.

And his biggest laughs came at the expense of former President Donald Trump.

The white-tie and snark affair is part of the fabric of elite D.C. culture, with politicians, lobbyists, and journalists gathering for a night of schmoozing. Always a bipartisan affair, Sununu was representing the GOP while Rep. Jamie Raskin did the comedy work for the Democrats.

According to Politico’s reporter on the scene, Sununu went straight after Trump:

“You know, he’s probably going to be the next president,” Sununu said of Trump, musing about his “experience,” “passion,” “sense of integrity” and the “rationale” he brought to his tweets. As the room quieted to see where he was going with this, he paused, then yelled: “Nah, I’m just kidding! He’s F***ING CRAZY!” The ballroom roared with laughter. “ARE YOU KIDDING?! Come on. You guys are buying that? I love it … He just stresses me out so much! … I’m going to deny I ever said it.”

It didn’t stop there: “The press often will ask me if I think Donald Trump is crazy. And I’ll say it this way: I don’t think he’s so crazy that you could put him in a mental institution. But I think if he were in one, he ain’t getting out!”

While edgy comedy is a Gridiron Dinner tradition, Sununu went out of his way to target the former president. When he mocked conspiracy theorist and pillow manufacturer Mike Lindell, he threw in a shot at Trump.

“This guy’s head is stuffed with more crap than his pillows, Sununu said. “And by the way, I was told not to say this, but I will: His stuff is crap. I mean, it’s absolute crap. You only find that kind of stuff in the Trump Hotel.”

Sununu also told a story about a time Trump visited him in New Hampshire and invited him to ride inside the presidential limo, The Beast. The then-president suddenly stopped talking and pointed out the window at people lining the road holding American flags, saying, “They LOVE me!” Only problem, said Sununu, was that the man he pointed to held a sign that read, “F*** TRUMP.”

While some Granite State Republicans shrugged it off as comedy — “It’s a Gridiron roast. Political jokes. I don’t take any of it seriously,” said RNC Committeeman Chris Ager — Trump allies like longtime advisor Corey Lewandowski were not amused.

“Chris Sununu is not his father. His father is very tough and a true Trump supporter,” he told NHJournal. “If Chris had any guts, he would have run for U.S. Senate, and instead took the easy way out. And if the right Republican were to run against him, I’d be willing to bet Donald Trump would endorse [Sununu’s] opponent.”

Former GOP state Rep. Josh Whitehouse, who served in the Trump administration, was even blunter:

“Chris Sununu has positioned himself to be the anti-Trump guy. He is appointing Democrats to judgeships, supporting anti-Trump candidates, and spiking a great redistricting plan to protect his beer buddy [Jeff Cozzens] in CD2. I guess the only thing I am surprised about is that he isn’t running on the other side of the ticket.

“Of course, nothing should surprise any of us when the governor is a guy whose only real qualification was his last name,” Whitehouse added.

In February, Lewandowski told radio host Howie Carr, “The president is very unhappy with the chief executive officer of the state of New Hampshire, Chris Sununu. And Sununu, in the president’s estimation, is someone who’s never been loyal to him. And the president said it would be really great if somebody would run against Chris Sununu.”

This is a far cry from the days when Sununu infamously called himself a “Trump guy through and through.”

“The Gridiron dinner is an annual comedic event built around using self-deprecating humor to instill a spirit of bipartisanship,” Sununu advisor Paul Collins, said in a statement Sunday. “Gov. Sununu began by making fun of his own father and family and included jokes on everyone from CNN to Bernie Sanders, Donald Trump, and Jenn Psaki. It was a great night where no one took themselves too seriously, and given the crowd’s reaction to some of the governor’s jokes, he will be keeping his day job.”

That compares to 86 percent among GOP voters who approve of Sununu, and 83 percent of very conservative Republicans.

Trump is even more popular in early primary states like Iowa and South Carolina, where he handily defeated Biden in the 2020 election. (Trump lost New Hampshire by 7.5 points.)

Republican strategists in New Hampshire and D.C. told NHJournal Sununu’s aggressively anti-Trump stance is a sign he is looking seriously at a presidential bid in 2024. He appears to be betting big that GOP primary voters will have a very different view of Trump in 18 months than they do today.

“This is a huge gamble,” one GOP strategist said. “There is no walking this back.”

“I’d say it’s a win for the governor,” GOP campaign vet Craig Stevens told NHJournal. “He took advantage of the moment and he showed people he’s not afraid of President Trump. And he did with charm, humor, and humility.”

Stevens, who worked on the George W. Bush and Mitt Romney campaigns said that, as a result of this speech, “Republicans and independents all over the country who had never heard of Chris Sununu are going to be talking. And many who may be looking for an alternative to Trump and his acolytes have someone new to watch. And, in this case, that’s the definition of a win.”

If that was Sununu’s goal, it worked. In addition to being the top story in the Politico Playbook, his comments made headlines in The Washington Post, the Associated Press, and the Big Three broadcast newsrooms, plus the London (U.K.) tabloids.

While more than 600 people attended the purportedly bipartisan event, only two GOP members of Congress, Sens. Roy Blunt (Mo.) and Susan Collins (Maine), showed up for the dinner. President Biden was also a no-show, but he sent a video in which he thanked Sununu for “helping Democrats keep the Senate.”

In January, Biden gave Sununu a shout-out during a press conference, using Sununu’s criticisms of Senate Republicans to defend his own record in the White House.

” I continue to believe our party is better and stronger when we are united, and I have no doubt that in November, we will be. As for me, I’d gladly go back to when we had no inflation, $2 gas, were energy independent, had secure borders and our country was safer.

“Say what you want about Trump, but we were much better off two years ago than we are today – and that’s no joke,” Smith said.