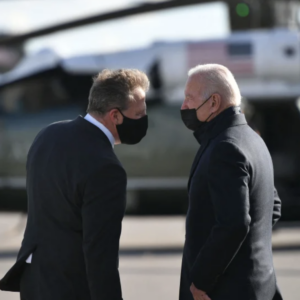 It sounded that way during the Democratic president’s press conference on Wednesday when he invoked Gov. Sununu’s words to make the case that he has been the victim of Republican obstruction.

Biden took to the lectern facing yet another loss on the legislative front as federal election laws he supports were preparing to go down to defeat in the U.S. Senate. His $5 trillion Build Back Better bill also remains stalled. Meanwhile, his poll numbers have fallen more in his first year in office than any modern president, and 70 percent of Americans say the country is on the wrong track.

Biden said he did not believe polls showing his support among independent voters had fallen to 25 percent, but he does believe he is doing a great job.

“I didn’t overpromise. I probably outperformed what most people thought would happen,” Biden said. In fact, he later added he plans to travel across America in the coming months and talk to the voters face to face, “now that the big problems are fixed.”

As for his high-profile legislative failures on Build Back Better and the federal voting laws, Biden said the blame belongs to the Republicans in the Senate. And he used Sununu’s words to make his case against the GOP.

“I did not anticipate that there would be such a stalwart effort to make sure that the most important thing was that President Biden didn’t get anything done,” Biden said. He then read an excerpt from an interview Sununu recently gave The Washington Examiner about why the New Hampshire governor decided not to run for Senate.

“They were all, for the most part, content with the speed at which they weren’t doing anything. It was very clear that we just have to hold the line for two years. OK, so I’m just going to be a roadblock for two years. That’s not what I do,” Sununu said, noting Republicans were trying to wait until they would hopefully win the presidency in 2024. “It bothered me that they were OK with that,” Sununu said.

It showed that the most important thing for the GOP was to make sure Joe Biden didn’t get anything done, the president concluded, demanding, “What are Republicans for? Name me one thing they’re for?”

In fact, Democrats control the Senate and they have the votes to pass Build Back Better, as well as the votes to break the filibuster and pass any legislation they choose. Republicans don’t have the votes by themselves to stop either measure.

But having a prominent Republican like Sununu making the case the GOP is the problem is a political gift to Biden.

Sununu declined to respond to requests for comment after the speech, but GOP strategists and activists in both New Hampshire and D.C. agreed it was a problem Sununu created for himself.

Sununu’s comments aren’t news in New Hampshire, echoing attacks he has repeatedly made on D.C. and the Congress. In fact, earlier in the day, Sununu expressed similar sentiments during an online video event with The Washington Post.

Explaining that he preferred to serve as a governor because you can “get things done,” Sununu said:

“I think there’s no higher ground there,” Sununu added. “I think Democrats and Republicans are equally to blame for that.”

“Sununu is myopic,” one D.C,-based GOP strategist told NHJournal. “He’s just thinking about triangulating and not about what he’s handing the Democrats.

“I know he believes he is such a brilliant campaigner, but he just got outmaneuvered by a 79-year-old with a 30 [percent] approval rating.”

Longtime Democratic strategist Terry Shumaker was pleased with Biden’s performance, and Sununu’s role in it.

“I thought he was terrific in a way regular Americans can relate to, especially saying several times in different ways, when you find out what Republicans stand for, please let me know,” he told NHJournal. “Quoting Gov. Sununu saying that all GOP senators want to do is obstruct Biden was a high point too.”

“It wasn’t Republicans that have caused inflation to be the highest it’s been in 40 years. It wasn’t the Republicans that shut down the Keystone Pipeline and made us dependent on Russia and OPEC nations for our energy. It wasn’t Republicans that opened up our borders to anyone that wants to get into the country, including murderers and drug dealers,” Morse said in a statement. “Joe Biden, Maggie Hassan and the Democrats did that, and maybe instead of pointing the fingers at everyone else, they should fix the mess they’ve made of this country.”