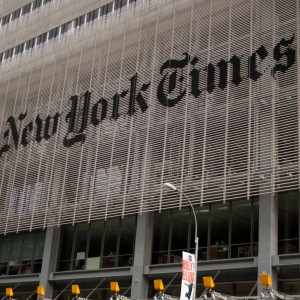 For endorsements, newspaper editorial boards are supposed to weigh all candidates and recommend the most meritorious. In the Democratic presidential primary, The New York Times weighed all the candidates and endorsed the scale.

At a time when American trust in institutions is cratering, this howler of an endorsement only further undermines the credibility of not just America’s so-called “paper of record,” but of newspaper editorial pages, and newspapers, in general. That’s not good for anyone.

Editorial pages add value in the market by employing professional ponderers of serious issues to answer tough questions on behalf of busy citizens. Or so the editorialist’s conceit goes. As a long-time editorial page editor, I have sympathy for that conceit, and I think there’s great value in having a few citizens whose job is to examine carefully important civic issues. But only if they take that duty seriously.

The New York Times’ decision to issue one endorsement for Amy Klobuchar and another for Elizabeth Warren in the Democratic presidential primary was a colossal dereliction of the editorial page’s most basic duty.

Worse, the way the editorial board comically attempted to twist that indecision into a virtue undermined both the candidates the paper intended to help and the credibility of the paper’s editorial page.

Unwilling to choose from among competing political visions, the Times instead mused (argued is too strong a word) — in a 13-paragraph introduction — that both visions have features so attractive as to render selecting one is too difficult.

It’s as if the high school newspaper staff brainstormed for four minutes and went with the suggestion of the freshman sportswriter who recently joined the newspaper club and doesn’t follow politics but really just wants everybody to get along.

In short, the double endorsement was a classic failure of cultural relativism. Instead of doing the hard work of guiding primary voters to one top choice, the Times threw up its hands and said, “Hey, man, here are a couple of options for you, depending on what you like, but, you know, whatever, we can’t really decide.”

Heeding Yogi Berra’s advice, the Times came to a fork in the road and took it.

Who was that supposed to help?

An endorsement of Warren might’ve revived her flagging campaign. An endorsement of Klobuchar would’ve been a nuclear bomb detonated in the heart of Wokeistan. But giving them equal endorsements left everyone, including the candidates, confused.

Failing to choose just left both candidates with a pat on the head and a gold star. “A for effort, you two!”
National newspaper endorsements have limited value in early-state presidential primaries, where papers like The New York Times have scant readership. Their value lies in the few inspiring phrases campaigns can lift for use in ads and mailers. A paper like The New York Times, known for its far-left political views, also uses its endorsement to signal to like-minded voters that a certain candidate passes ideological litmus tests.
By declaring each of its preferred candidates too flawed to endorse fully, the Times gave up guiding readers through their own decision-making processes, leaving them grappling with the same issues the editorial failed to resolve.

Large editorial boards often fail to settle their own internal conflicts, which weakens the punch, and thus the value, of their editorials. The Times’ failure in this case went well beyond that common flaw and undermined the paper’s case for offering editorial guidance at all.

If 14 professional editorial writers at the nation’s most famous newspaper can’t decide between Amy Klobuchar and Elizabeth Warren (it’s not a hard choice, really), then why should readers bother turning to these gurus for guidance on less weighty matters?

After the double endorsement debacle, it’s just a little harder to convince average Americans that newspapers are institutions they should trust for guidance on the most serious matters of the day. And that’s a disservice not just to journalism, but to the country.