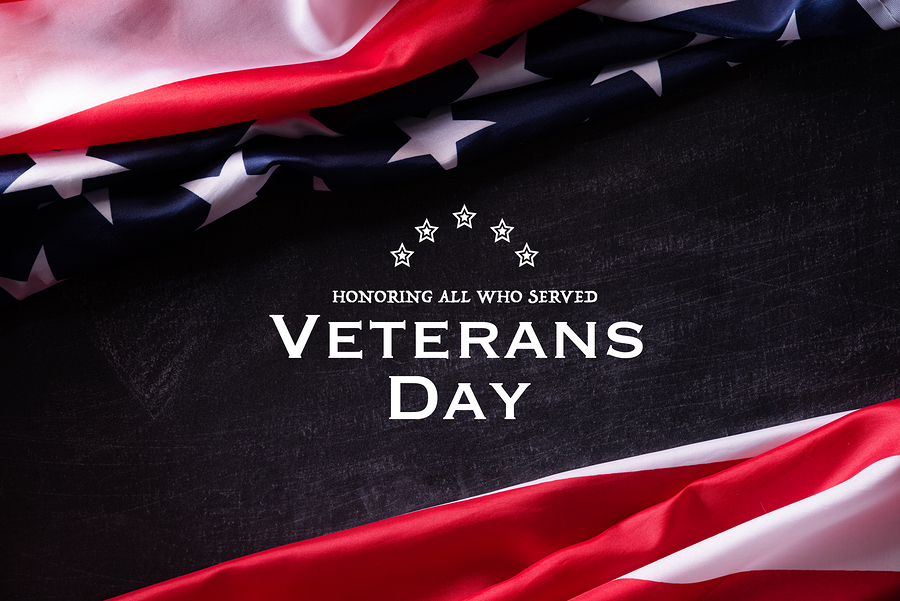 November 11 is both Veterans Day and the 100th anniversary of the Tomb of the Unknown Soldier, the solemn landmark at Arlington National Cemetery honoring military personnel killed in action who have never been identified. Since 1999, a vacant crypt on the grounds has honored missing service members from the Vietnam War.

The quiz below, from the Ashbrook Center at Ashland University, Ashland, Ohio, provides an opportunity for you to test your knowledge of Veterans Day and the Tomb of the Unknown Soldier.

1. What was Veterans Day originally called?

2. In what year was the name changed to Veterans Day?

3. Starting in 1971, after the Uniform Holiday Bill was passed moving federal holiday observances to Mondays, Veterans Day was observed on different dates. What president signed the legislation returning the annual observance to its original date?

4. Why is Veterans Day always observed on November 11, rather than on a Monday, like other national holidays?

A. The World War I ceasefire was signed on the 11th day of the 11th month

B. The Allies won the First Battle of Ypres on November 11

C.  The last World War I soldier returned home on that date

D. The Battle of the Somme ended on November 11 after 141 days

5. According to the Department of Veterans Affairs, there are approximately how many veterans living in the United States today?

6. Which U.S. state is credited with being the home to the most Medal of Honor recipients?

7. In proposing legislation to create the Tomb of the Unknown Soldier in 1921, which congressman said, “It is hoped that the grave of this unidentified warrior will become a shrine of patriotism for all the ages to come, which will be a source of inspiration, reverence and love of country for future generations”?

A. William A. Ashbrook of Ohio

B. Champ Clark of Missouri

8. Which U.S. president officiated at the ceremony dedicating the Tomb of the Unknown Soldier?

9. In addition to the Tomb of the Unknown Soldier, Arlington National Cemetery also houses a Tomb of the Civil War Unknowns. Of the 2,111 unidentified soldiers buried there, 1,800 were recovered from which battlefield?

10. Which former general said, “The highest obligation and privilege of citizenship is that of bearing arms for one’s country”? 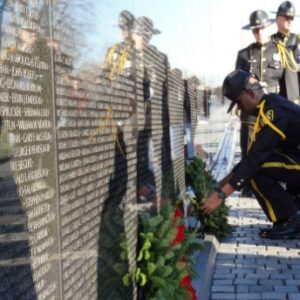 This December marks the 30th year that Wreaths Across American has placed wreaths on the graves of veterans in cemeteries around the country, including Arlington National Cemetery in Virginia. It honors those who have served our country.

Joe Regan, director of military and veteran outreach for Wreaths Across America and an army veteran, said the international organization’s mission is to remember fallen veterans,  honor the sacrifices of military members, living veterans, and their families, and teach the next generation of Americans the value of freedom and about the sacrifices that are made on their behalf every day.

On Sunday, December 12, a convoy will go from the group’s Columbia Falls, Maine headquarters to Arlington National Cemetery in Virginia, arriving on the 18th. That is national Wreaths Across America Day. Nearly 3,000 cemeteries will participate in wreath events. Thirty years ago the organization began with 5,000 wreaths. Now it’s up to 2 million, with an army of volunteers all over the country. Sponsorship is $15 a wreath.

The organization began as a tradition for the Worcester family. In 1992, Morrill Worcester and his wife, Karen,  found themselves with about 5,000 extra wreaths that they didn’t sell during the holiday season. Morrill thought back to when he was about 12 and had won a competition to get a trip to Washington, D.C. One thing that always stuck with him about that trip was his visit to Arlington National Cemetery and he had the idea of laying those wreaths there as a thank you to veterans.

Now with over 3,000 cemeteries in every state of the country, it has also expanded into Guam and Puerto Rico. Before COVID, it was also in Europe, honoring veterans who are buried overseas.

“And so that opportunity to lay that wreath on the headstone of that veteran, to say the name of that person, it sounds so simple,” said Regan. “But at that moment, when you say that name, and you’re standing there, it creates that connection and that bond with that veteran, and that’s tremendously powerful.”

For Regan, who has several friends who were killed overseas, it is maintaining that connection with fallen brothers. For others, it could be a complete stranger. Many veterans had no living relatives to recognize them.

“One thing I’ve heard from a couple of different places: They say that everyone dies twice. First, when your heart stops, and then there’s the last time that someone says your name,” said Regan. “Through this program, regular citizens can keep that individual’s memory alive. The visible part of what we do is the wreath-laying. But it really is a powerful expression of our commitment to living up to the legacy of those men and women who have served our country and are the ones responsible for all the amazing things that we have.”

With about 500 partnerships with individual American Legion and VFW posts across the country, volunteers and donors come together to make this event possible every year. For every two wreaths sponsored, the third wreath will help support living veterans in communities.

“And if you look at Hollywood, there are several very notable folks there who served in the United States military. And one, in particular, my great-grandfather who served in World War I was the iconic Walter Brennan, one of only a few actors who won three Academy Awards. One thing that made him distinctive was his unique voice. And I learned from my great-grandfather that he had been in several gas attacks,” said Regan.

“That was why Walter Brennan’s voice was higher pitched, a result of damage to his vocal cords because of a gas attack. A guy like Walter Brennan, who, despite being wounded, used that and it helped define his career. And he found tremendous success. So I go back to the last portion of our mission, the teaching component. We share those stories of how our veterans who are living in communities across the country continue to give back and use the skills and the experiences they had in the military, to bring back to their civilian lives and create a tremendous amount of value,” he said.

Regan encourages everyone to find a cemetery and witness the wreaths for themselves on December 18.

You can also hear the stories of our veterans on the iHeart Radio platform, where they have a Wreaths Across America radio station, not only to highlight patriotic music but information about activities, interviews with location coordinators but also issues impacting veterans.  One of the programs, “Mission Matters,” is one that Regan hosts along with co-founder and executive director Karen Worcester explains why its mission is important.

Prior to joining Wreaths Across America, Regan ran a nonprofit that focused on supporting homeless veterans and veterans with chronic mental health issues, giving them hand-ups, not handouts.

Veterans answered their nation’s call, and now a group of Americans are joining together to answer a cry for help from far too many of those who’ve served.

Military veterans make up roughly 10 percent of the adult population in the United States. Unfortunately, one of the most common causes of death for veterans is suicide. Increases in veteran suicide, especially during COVID, inspired the Troops First Foundation to ask Congress to declare November 21, 2021, the first annual “National Warrior Call Day.”

The movement is backed by the seven living secretaries of Veterans Affairs (VA), who wrote to Congress urging them to act.

Former VA Sec. David Shulkin, MD said, “Warrior Call Day is important to remind each of us that the sacrifices continue for the brave men and women who defend our country. We want all Americans to be aware of the responsibility to reach out and offer support to our veterans.”

U.S. Rep. Mary Scanlon (D-Pa.) supports the effort. She says the effort is only part of addressing the broader issue. Warrior Call Day’s goal is for Americans across the country to reach out to their family and friends who have served.

“One of the issues that we’ve seen over time, and you see the same thing with law enforcement, is that it’s very tough to kind of crack the nut with veterans to make sure that they get the services that are available, how to reach people, and similar to law enforcement, it’s the folks who are used to being the rescuers and not wanting to ask for help.”

Part of the issue with mental health and military veterans is the stigma that surrounds these issues. Asking for help can often be seen as a weakness for members of the Armed Forces. There is hope that Warrior Call Day will bring more attention to this problem and help break that cycle.

“I think it’s probably part of the whole de-stigmatization issue that we’re dealing with across the board with mental health issues and making sure that people check in with their loved ones and trying to get some traction that way,” Scanlon said. “Because of the escalating issues with suicide, there have been a number of different approaches, whether it’s beefing up resources, or trying to find alternative methods of service delivery, making sure that we connect people as they’re leaving the service more strongly so they don’t have to go looking as hard. I think it’s part of a whole menu of efforts to really get a handle on the problem.”

One way that Congress has stepped up for veterans in the past is the Blue Water Navy Bill passed in 2019. It instructs the VA to presume that Navy veterans who served aboard ships in the open waters off the coast of Vietnam were impacted by the use of Agent Orange and should receive the appropriate medical benefits.

Scanlon says there’s a similar effort being explored for post-9/11 veterans and the burn-pits used in the Middle East. About 25 percent of veterans are already experiencing health issues from exposure to these pits.

“We do have more former-service members in Congress now than we’ve had in decades so that is helpful to have people in the mix who are first hand on some of the issues,” Scanlon added.

“We must get Veterans connected to other Veterans and the qualified care they deserve,” McDonald said. “The Veterans Crisis Line (1-800-273-8255) plays a critically important role in this. They save lives. We know from research that if we can connect Veterans to the VA (and the Crisis Line) we can save lives. Nearly 70 percent of those who take their own lives are not connected to the VA. So, National Warrior Call Day is an opportunity to connect every Veteran to the care they need and deserve.”