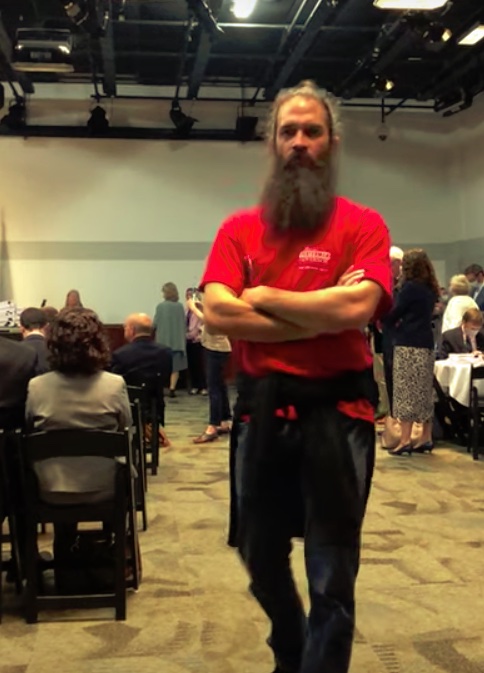 The only protestor convicted for protesting COVID-19 lockdowns in front of Gov. Chris Sununu’s home is taking his case to the New Hampshire Supreme Court.

Frank Negus Staples, aka Foot Loose, is appealing his conviction on one count of disorderly conduct for his role in the protests outside the homes of Sununu and Chief Justice Gordon MacDonald. He was among nine people arrested during the protests, and the only one convicted.

“We were all found not guilty of ‘picketing,’” Staples said. “I was found guilty of ‘disorderly conduct.’”

NHJournal reporter Chris Maidment was arrested during the protests and charged with picketing, despite identifying himself to authorities as a journalist on assignment. NHJournal earned a First Amendment award from the New Hampshire Press Association for its work on the story, and the charges were dismissed before the case went to trial.

MacDonald, who was New Hampshire’s Attorney General at the time of the protests, has recused himself from the case according to Staples. MacDonald’s Department of Justice was instrumental in creating the picketing ordinance used to charge the protestors.

“Gordon MacDonald has recused himself from the case due to his direct involvement in the creation of the town ‘picketing’ ordinance and how to enforce it,” Staples said.

The New Hampshire Supreme Court accepted Staples’ appeal as part of the dozens of cases accepted in November. A hearing date has not been set.

After Sununu started conducting government business from his home due to the pandemic, opponents of the governor’s COVID-19 policies started protesting in the street outside. Sununu and his neighbors expressed their unhappiness with the crowds of sign-waving demonstrators in their cul-de-sac, but the protestors were on public property.

In response, the town Board of Selectmen, including Sununu’s brother Michael, drafted an anti-picketing ordinance designed to discourage — if not prevent — the protests. Three members of the Sununu administration, including Department of Safety Commissioner Robert Quinn, testified on behalf of the protest ban at a December 8 select board meeting.

The language for the ordinance came directly from the Attorney General’s Office, according to emails obtained by NHJournal.

Concord attorney Seth Hipple, who represented several of the protesters, including Maidment, told NH Journal last year that the government is holding a losing hand.

“The prosecution’s case was a dumpster fire,” Hipple said.

None of the arresting officers were able to individually identify any of the protesters who were charged, and they were unable to specify what actions the protestors took that violated the law, according to Hipple.

Staples, who told NHJournal people do not like it when he gets loud, was a fixture at anti-COVID lockdown protests throughout the pandemic. He was among several people arrested at an Executive Council Meeting last year who were protesting a federal contract to pay for COVID vaccines.

Staples was also the lead protestor at the September 2021 Executive Council meeting that was shut down because of safety concerns.

Staples made statements to New Hampshire Department of Health and Human Services employees that they deemed threatening.The employees were unnerved and subsequently escorted to their cars by New Hampshire State Police Troopers. Staples, who was shouting and acting in an aggressive manner through the meeting denies he meant a threat when he shouted “we know where you live” to the DHHS employees.

Staples and several other protestors at the September 2021 Executive Council meeting were investigated by Attorney General John Formella’s office, but no charges were ever brought.