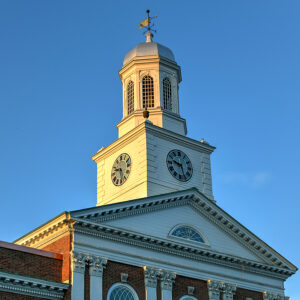 Grafton Superior Court Judge Lawrence MacLeod is recusing himself from the state education funding lawsuit, saying the property he owns in one of the towns intervening in the case could create the perception of a conflict of interest.

MacLeod recused himself from the case in an order he released Wednesday before he had a chance to rule on the injunction. The plaintiffs are seeking to stop the state from setting a property tax rate for the coming year.

MacLeod and his wife own more than $1 million of property in the city of Lebanon, one of the communities trying to now intervene in the case as part of the Coalition of Communities. It is fighting the plaintiff’s injunction that seeks to keep the Statewide Education Property Tax, or SWEPT, rate at $0.

“The undersigned justice and his wife have a legal and/or beneficial interest in one residence, two rental properties, and two undeveloped lots in Lebanon with a combined property tax assessment in excess of $1,000,000,” MacLeod wrote.

The Coalition, formed in 2006, is made up of mostly towns and cities with high property values working against the return of a “donor” and “receiver” town system for education funding.

The plaintiffs in the case, represented by Andru Volinsky, John Tobin, and Natalie Laflamme, claim the state continues to ignore the 1990s Claremont decisions issued by the New Hampshire Supreme Court by using varying rates for the statewide property tax. They claim it punishes poor communities with lower property values.

The plaintiffs argued last week before MacLeod that New Hampshire cannot set any SWEPT rate for the coming year as the system is currently in violation of the Claremont rulings and flies in the face of the state constitution. Currently, property-rich towns that raise more in taxes through the SWEPT tax are allowed to keep the surplus.

After that hearing, the Coalition filed to intervene in the case and stop MacLeod from approving the injunction. Coalition attorney John-Mark Turner wrote that these would-be “donor” communities would face chaos and uncertainty and be forced to raise local property taxes if the plaintiffs prevail. They oppose changing the current system.

MacLeod’s recusal states that since he and his wife could potentially benefit from the Coalition’s efforts, he needed to step aside.

“(I)t appears that the undersigned justice and his spouse may enjoy a tax advantage under New Hampshire’s existing education taxation structure given the assessed values and fortuitous locations of their real properties not available to the plaintiffs and other real property owners similarly situated, such that the undersigned justice and his spouse would or could be placed at more than a de minimis economic disadvantage should the plaintiffs prevail in the case,” MacLeod wrote.

The SWEPT accounts for 30 percent of education funding in New Hampshire. Under the law, as many as 30 wealthier communities in New Hampshire are keeping a portion of the money raised through the SWEPT, while some poorer towns are paying more, according to the lawsuit.

SWEPT started in 1999 as a response to the Claremont decisions, which found that the state has a constitutional obligation to fund an adequate education. The money raised, more than $360 million estimated in the coming year, is used to fund state adequacy grants.

The debate is over the definition of “adequate.”

According to the plaintiffs, wealthy communities raise more funds per pupil through SWEPT than the state’s low standard for what it asserts is the cost of an “adequate” education. Further, since 2011, the state has allowed those wealthy towns to keep the surplus, which flies in the face of the Claremont decisions, according to the motion.

“The SWEPT tax as currently administered is not uniform in rate as the State allows towns with surplus SWEPT funds to either set a negative local education tax rate to offset the State’s official equalized SWEPT tax rate or retain the excess,” the plaintiff’s motions states. “Both of these mechanisms have been previously deemed unconstitutional by New Hampshire courts.”

MacLeod’s order states a new judge will be assigned to the case soon. It is not yet clear how much of a delay his recusal will add to the lawsuit’s timeline, or if the new judge will have to rehear the parties on the injunction against the SWEPT rate.