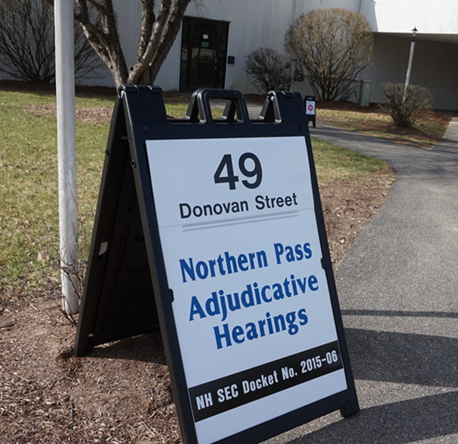 As the New Hampshire legislative session quickly comes to a close, the public hearings for the controversial Northern Pass project are just beginning to heat up. Thursday marked the first of three scheduled public statement hearings in Concord for people who are not intervenors in the project but have an interest in what happens.

The 192-mile proposed transmission line from Pittsburg to Deerfield would bring roughly 1,090 megawatts of hydropower from Quebec to the New England power grid. Proponents say the $1.6 billion project could reduce the state’s high electricity costs and encourage businesses to move to New Hampshire. Opponents disagree and say the project would ruin the Granite State’s tourism industry due to the the high-voltage towers and construction that would impact local businesses.

“The proposed army of giant towers marching across the spines of these towns will cripple tourism, property values, community spaces, and family recreation, not to mention, their children’s health,” said Kathleen Sims of New Boston.

A total of 117 people are scheduled to make statements about the project during the upcoming hearings and about 70 percent have indicated that they oppose the project. June 15 was the first one, but there are others scheduled for June 22 and July 20. A possible fourth hearing could be included if more time is needed.

The hearings are part of the Site Evaluation Committee’s (SEC) ongoing adjudicative hearings that will continue throughout the summer months. The committee must decide whether to approve or deny Eversource’s Northern Pass application by September 30.

Eversource claims the hydropower from Canada will save New Hampshire ratepayers $60 million annually. Opponents are concerned about how much residents would ultimately benefit from the project and if they would end up getting stuck with the construction bill.

Although a majority of the speakers are against the energy project, some said the benefits outweighed the risks.

“There is no perfect solution when it comes to building out our energy infrastructure, but it seems to me that Northern Pass has struck the optimal balance,” said Tom Farrelly, a commercial realtor in Manchester.

“The key question to consider is, ‘Do the benefits outweigh the potential impacts?’ and the benefits unquestionably, yes, outweigh the impacts,” he said. “This is the best large-scale option we have before us right now with real tangible benefits to our state.”

The hearing saw two Republican state representatives speak out on opposite sides of the project.

Rep. Herb Richardson, R-Lancaster, said most people in the North Country favor Northern Pass because it would bring jobs and new tax revenues for towns along its route.

Rep. Brad Bailey, R-Monroe, said the North Country depends on the tourism industry and the project would ruin New Hampshire’s vistas, drive away jobs, and ultimately not lead to lower electric rates.

Students from Yale University traveled to the hearing to voice their opposition to the project. They also went to publicly ask the university’s administration to end its lease with Northern Pass. Bayroot, LLC is owned by Yale’s endowment and has a land agreement with Eversource which includes 24 miles in Coos County the company can use for the transmission lines.

However, the entities signed an updated agreement earlier this month extending the lease for another 93 years.

At a separate hearing on Thursday, Gov. Chris Sununu’s nominee to lead the state’s Department of Environmental Services (DES) was grilled over his position on Northern Pass.

“I think the issue is balance,” said Robert Scott, Sununu’s nominee. “I haven’t heard all the testimony to understand are the negatives outweighed by the positives.”

Sununu has been a fervent supporter of Northern Pass since his gubernatorial campaign last year. Scott currently sits on the SEC since he is one of the three state Public Utilities Commissioners, but he has recused himself from the Northern Pass evaluation process and indicated he would continue to do that if confirmed as DES commissioner.

More testimony at the Northern Pass public hearings is expected to include Granite State lawmakers, like Republican Reps. Bing Judd of Pittsburg and Neal Kurk of Weare. Expect to see more emotions and passionate pleas from residents before the SEC makes its final decision.