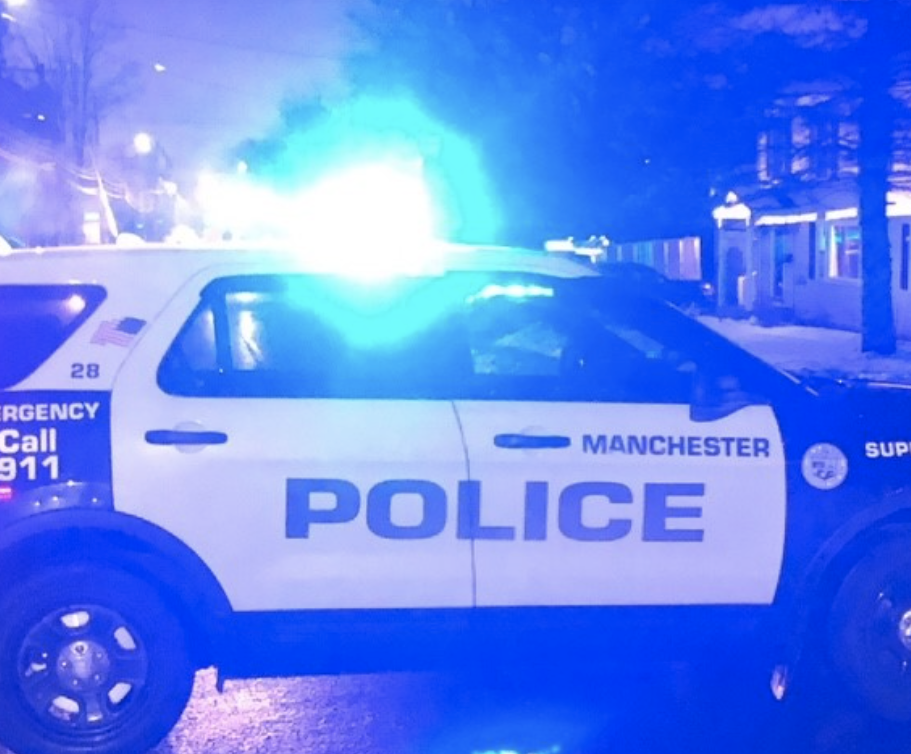 Manchester’s homeless crisis isn’t being helped by police departments from surrounding communities dropping off their own homeless people in the Queen City.

Aldenberg said he has been confronting other New Hampshire police chiefs over the practice of bringing homeless people to Manchester for months. Rather than addressing their local homeless issues, they are relying on Manchester to provide care and services. Last month, Aldenberg witnessed officers from Londonderry bringing a homeless man to the city and leaving him outside a shelter.

“It’s bad enough when other states do it to me,” Aldenberg said, “but when a neighboring community is doing it to me it’s even worse.”

Manchester Police spokeswoman Heather Hamel said the Londonderry officer did not secure a space for the man inside the shelter and simply left him in the city.

“The shelter had not been contacted prior to the officer’s arrival, and the officer did not go inside,” Hamel said.

Londonderry Police Chief Kim Bernard did not respond to a request for comment on Wednesday, nor did Londonderry Town Manager Michael Malaguti,

Hamel said Aldenberg has since spoken to Bernard, and the two chiefs now have a good working relationship.

“The two chiefs spoke. All is good,” Hamel said.

But Aldernberg is putting other communities and their law enforcement agencies on alert. Continue to dump your problem on Manchester, and you will get ‘named and shamed.’

Aldenberg told Cline other communities are regularly transporting their homeless population to Manchester where they get essentially left to fend for themselves. At one point, the large homeless encampment on Manchester Street was largely made up of non-Manchester residents.

“When that camp over at 199 Manchester Street was going, 60 percent of those people were not from the city of Manchester,” Aldenberg said.

It’s not just New Hampshire communities who are using Manchester as a destination for homeless people. Sanford, Maine police drove a homeless woman 60 miles to Manchester in December and dropped her off outside a shelter. The shelter had no space for the woman, and she was found to be suffering from frostbite, according to a report in Manchester InkLink. Hamel said that kind of move happens frequently.

Sanford Police Chief Craig Andersen did not respond to a request for comment on Wednesday, though he has reportedly since apologized.

The woman found herself stranded when she learned the shelter had no space for her. She made her way to Mayor Joyce Craig’s office in City Hall seeking help. The woman was treated and later brought to a shelter in Portland, Maine, where space had been secured for her by Manchester officials.

While there may be little that officials can do to stop other communities from using Manchester to take care of their homeless population, Aldenberg has let other police chiefs know he will start shaming chiefs of departments who leave their homeless in Manchester.

“No chief wants to be publicly embarrassed,” Aldenberg said. “I let them know if you do this to me again, I’ll make an example out of you.”

Aldenberg’s officers recently oversaw the eviction of about 60 homeless people from the camps set up downtown. The tents are gone, for now, but the homeless people are still in the city he said. He’s trying to work with homeless people and city and state agencies to address the crisis.

“Obviousl, they’ve gone to other parts of the city which we need to address. We’re not going to arrest our way out of this problem,” he said. 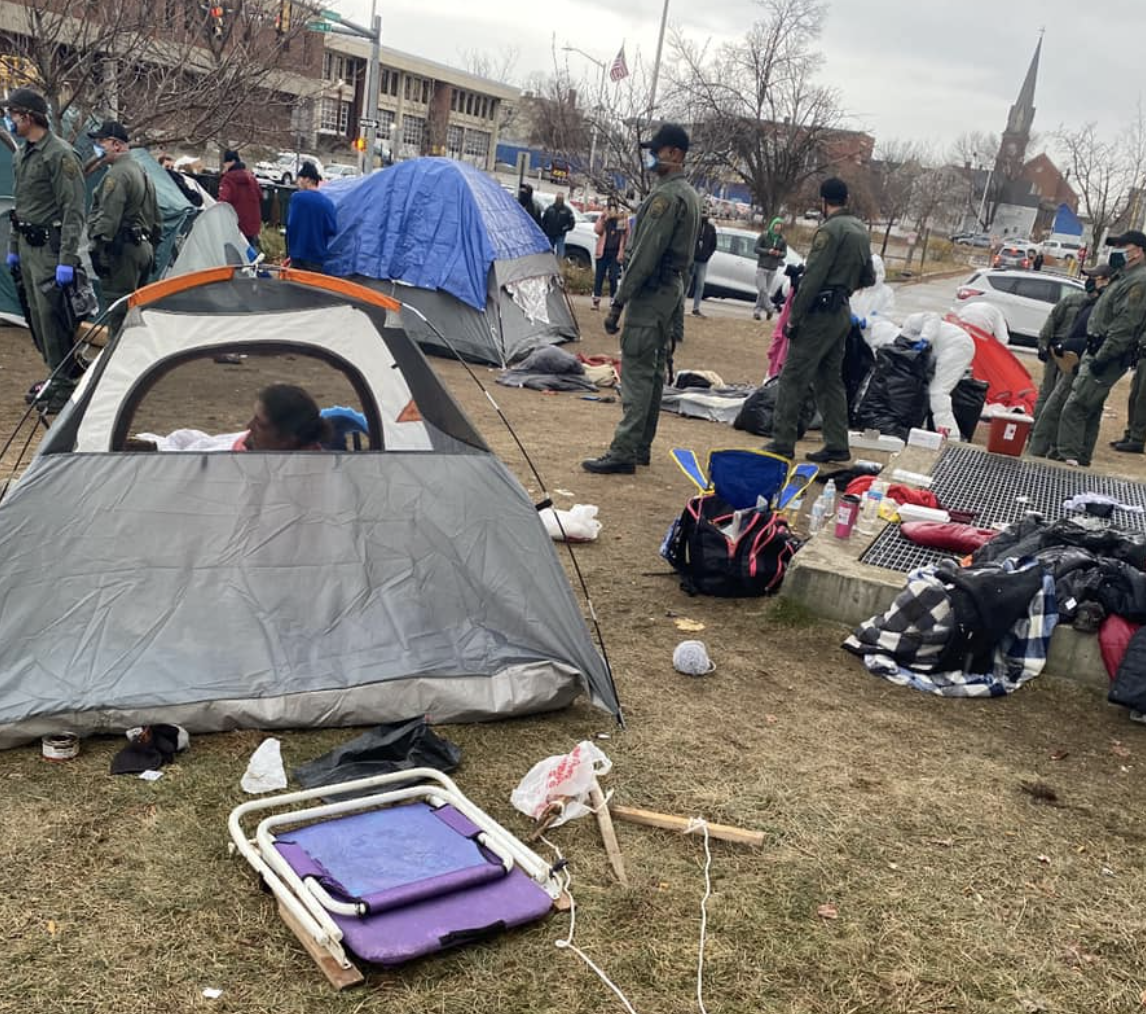 Backed into a corner by a steady stream of negative press over the city’s homeless crisis, Manchester Mayor Joyce Craig got the legal go-ahead to clear a downtown homeless encampment.

Craig announced the evictions earlier this month in response to public outcry over the encampments downtown, with the original plan to clear the streets by Tuesday. However, the New Hampshire ACLU filed for a temporary restraining order to block the city from removing the homeless people, halting Craig’s plans.

On Tuesday, Superior Court Judge John Kissinger ruled the city can remove the approximately 50 homeless people from the sidewalk as the encampment represents a danger to the community at large.

Kissinger cited recent deaths, as well as close to 400 calls for police service at the camp, including assaults and drug overdoses.

“Considering the grave risks to public health and safety posed by the ongoing presence of the encampment on public sidewalks in downtown Manchester and the availability of safe alternatives for the people living in the encampment, a temporary restraining order is not justified,” Kissinger wrote.

Craig announced Tuesday the camps will be cleared Wednesday, with space being made available through a partnership with the YMCA to create a women’s shelter at the former Tirrell House. That space is the result of Gov. Chris Sununu’s intervention at the state level.

The city is also opening a temporary warming shelter with cots at the William B. Cashin Activity Center.

“City employees and non-profit partners have been working around the clock to ensure the health and safety of both the individuals experiencing homelessness in Manchester and the community at large,” Craig said in a statement released Tuesday afternoon.

Craig’s staff did not respond to NHJournal when asked if there would be enough space for all the homeless people being evicted.

Stephen Tower, a staff attorney with New Hampshire Legal Assistance, expressed disappointment in Kissinger’s ruling and cast doubt on Craig’s ability to adequately shelter the people she is evicting.

“Without a plan to immediately relocate and provide a higher level of shelter and services, this eviction will only perpetuate the cycle of chasing these houseless individuals from place to place, alienating and endangering them further,” Tower said.

Gillies Bissonnette, legal director with the New Hampshire ACLU, did not respond to a request for comment.

“The state has always and will continue to be open to meaningful collaboration on this issue with your cities and other municipalities across the state,” Sununu wrote. “However, politically motivated letters merely muddy the water and make that mutual goal of collaboration more difficult to achieve.”

Sununu’s letter recounted the millions of dollars the state has already put into dealing with homelessness and housing.

Meanwhile, Sununu has repeatedly noted Craig and the other mayors are sitting on a combined $73 million in unspent federal funding that could be used on homeless shelters and services.

Alderman Joseph Kelly Levasseur said if Manchester residents want someone to blame, they should look to the other communities around the state, many with Democratic mayors, who have the resources to shelter some of the state’s homeless but are content to see them shunted off to the Queen City.

“Manchester is the dumping ground for the rest of the state,” Lavasseur told NHJournal. “If every community took just two or four people into their towns, the relief they could provide — not only to the city of Manchester but also these homeless persons — would be incredibly powerful. This has to be a state-wide issue dealt with by all towns, counties, and cities in New Hampshire.

“Manchester cannot continue to do this on its own; and provide our property owners and taxpayers the level of comfort, safety, and quality of life they deserve.”