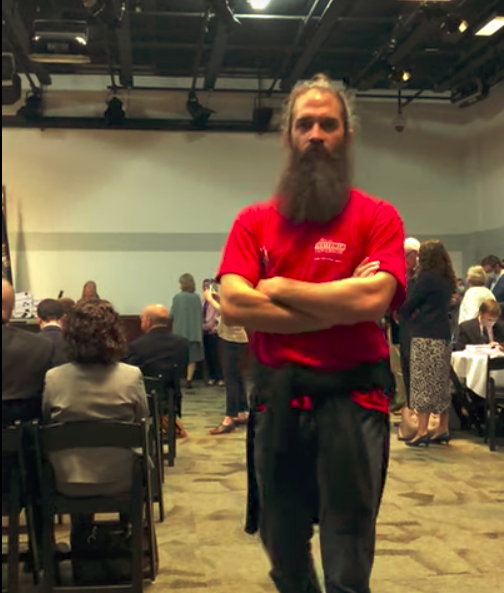 Granite Staters watched in confusion and embarrassment last September 29 as a handful of rowdy anti-vaccination protesters shut down a meeting of the state’s Executive Council, taunting the crowd, threatening state employees, and ignoring the law enforcement officers gathered at St. Anselm College.

Eight months later, the New Hampshire Attorney General’s Office has finally finished its investigation of the event. It says there will be no prosecutions.

“Given the specific facts of this case and the state’s inability to prove any potential criminal charges beyond a reasonable doubt, the state will not bring criminal charges against any individual as a result of their conduct on September 29, 2021. The Attorney General’s Office is closing its review and will take no further action on this matter,” Attorney General John Formella and State Police Colonel Nathan Noyes said in a statement.

They acknowledged there was evidence the protestors committed the crimes of obstructing government administration and disorderly conduct. But, they said, it was not enough for the state to bring charges.

The dozen or so protestors effectively took over the meeting, roaming among the attendees for close to an hour shouting complaints about access to Ivermectin for COVID-19 treatment, repeating false claims of “thousands of deaths” from the vaccine, and warning vaccination supporters they would be treated the way Nazis were treated after World War II.

“You’re going to be held accountable,” one woman cried. “Maybe not now, but years from now — Nuremberg trials!”

Dozens of police officers were on-site from State Police and Goffstown. But they never intervened to stop the protestors. Instead, they escorted employees from the Department of Health and Human Services employees to their cars, employees who said they felt threatened by the protesters.

Without those employees on hand to testify, councilors claimed the meeting could not go forward.

As video of the police standing by amid the chaos hit New Hampshire TV screens, some citizens began questioning why the trained law enforcement officers did not act. Asked if there had been a review of the officer’s inaction, attorney general spokesperson Michael Garrity told NHJournal,  “Any review of the actions of any involved law enforcement officers would be handled administratively by their respective agencies and would not involve this office.”

The issue of police refusing to act is particularly sensitive in the wake of the school shooting in Uvalde, Texas.

Gov. Chris Sununu’s office did not respond to a request for comment on Tuesday. He also skipped out of the meeting in September, leaving Councilor Dave Wheeler (R-Milford) to announce to the worked-up crowd the meeting was being canceled.

Wheeler said at the time several state employees felt unsafe at the meeting and left. Since those employees were needed to answer questions from the council members, the meeting could not take place.

“Mission accomplished,” one protester shouted at the news.

Councilor Cinde Warmington (D-Concord) said at the time New Hampshire Department of Health and Human Services Commissioner Lori Shibinette made the decision to have her staff leave as the protesters grew increasingly agitated. Staffers were escorted to their cars by New Hampshire State Police troopers.

When the DHHS employees left the auditorium, the situation in the room got worse.

“Once that happened, we got reports from State Police and the commissioner of safety that the room had become more disruptive and they felt it had become unsafe,” Warmington said.

Despite police deeming the situation unsafe, none of the protestors will be charged. New Hampshire does arrest and prosecute protestors frequently, according to Pat Sullivan with the New Hampshire Chiefs of Police Association.

Sullivan declined to comment on the Executive Council protestors. The town of Newfields wrote an anti-picketing ordinance specifically so it could arrest protesters upsetting the governor’s family by protesting near his house. The Newfields police even arrested the New Hampshire Journal reporter who was covering the protest.

That reporter is scheduled to appear in court July 7.

Many of the same protestors were arrested at the October meeting for their disruption. Michael Garrity, Director of Communication for the Attorney General’s Office, said none of the prosecutions of those arrested in October will be impacted by Tuesday’s decision. Asked why protesters engaged in the same behavior were not charged with a crime in both cases, Garrity said the office could not comment.

“Because the cases that arose out of the 10/13 meeting remain ongoing, we cannot comment on those matters,” Garrity said.

The New Hampshire Department of Safety has refused to even say how many police officers were at the meeting.

Raymond claimed at the time the failure to arrest the protesters in September was due to concern for their constitutional rights.

“Decisions on whether to effect an arrest require officers to carefully consider the fundamental rights granted to protesters by the First Amendment, the text of the criminal code, as well as the safety and security of other bystanders and attendees,” Raymond said.

That concern was apparently resolved when police arrested many of the same protestors for the same behavior a month later.