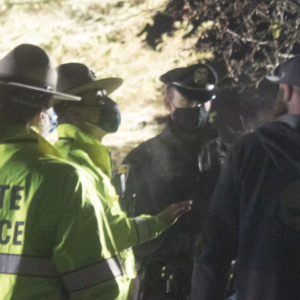 Posted to Politics December 28, 2020 by NewsNHJ

Newfields police used a controversial new ordinance to ticket protesters gathered outside Gov. Chris Sununu’s home Monday night. They also ticketed an NHJournal reporter covering the event, despite being repeatedly informed that he was a journalist on the job.

Monday morning, NHJournal broke the story of the Newfields Select Board passing an ordinance banning picketing at private residences. According to minutes of a December 8th meeting, the ordinance was a response to weeks of peaceful protests against the governor’s statewide mask mandate by opponents outside Sununu’s Newfields home. 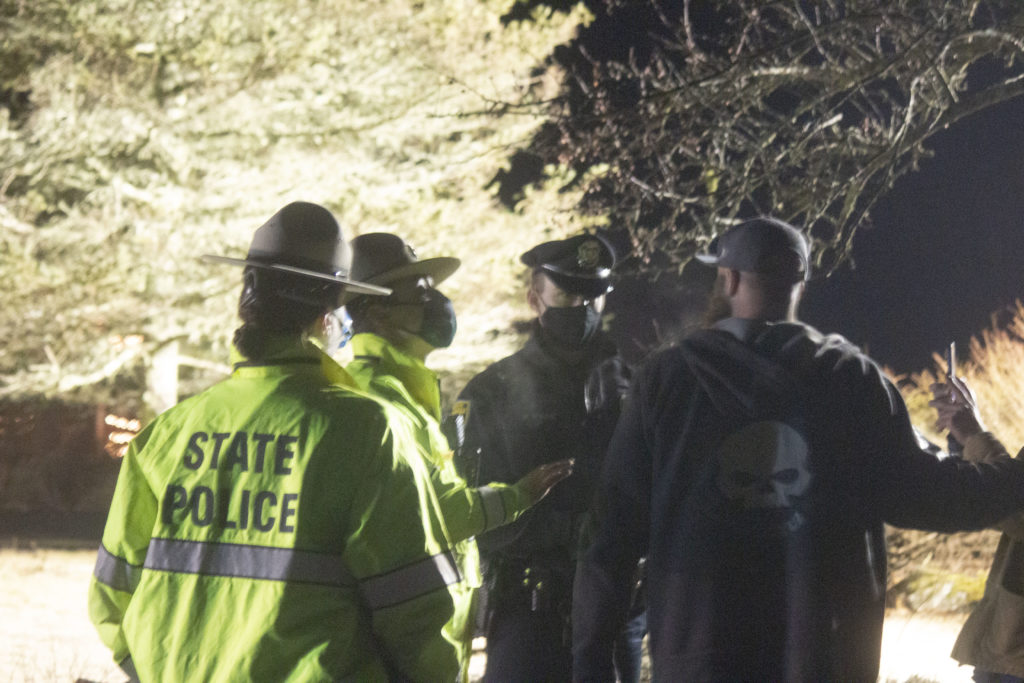 “It is unlawful for any person to engage in picketing before or about the residence or dwelling of any individual in the Town of Newfields,” the ordinance reads. Violators are subject to fines up to $100 for each offense. Chris Sununu’s brother, Michael, is a Select Board member in Newfields and his name appears on the signed ordinance.

In response to the new rule, which some free speech advocates believe may violate the First Amendment, a group of about 10 protestors gathered outside Sununu’s house Monday evening. The gathering, organized by a group calling itself Absolute Defiance, was announced on social media. State and local police were on hand to greet the protesters when they arrived. 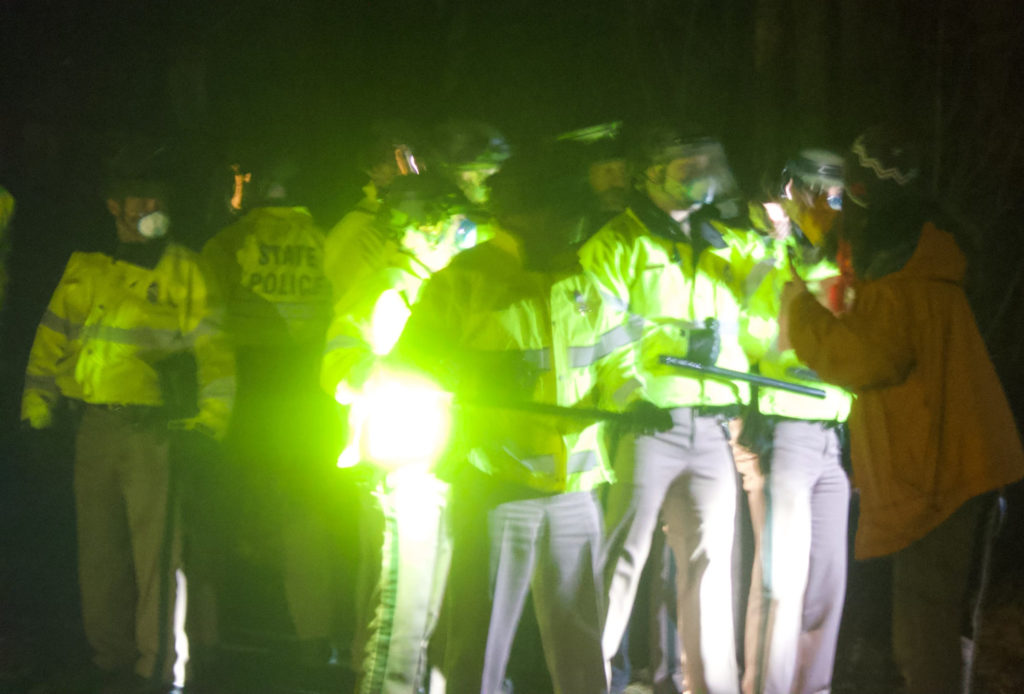 At that December 8th Select Board meeting, Chief Nathan Liebenow of the Newfields Police Department explained that enforcement efforts would be “aggressive in nature.”

He said violators would be warned first, but non-compliant protestors could then be subject to arrest for disorderly conduct. That was clearly the law enforcement strategy on display Monday night.

More than half a dozen police cruisers and even more officers were on the street outside the Sununu home to confront the protesters. Police had a generator-powered floodlight in the cul-de-sac to illuminate the area, and they immediately engaged with the demonstrators attempting to hold a candlelight vigil.

Troopers did not let them light their candles and warned them of the ordinance and the fines that would soon follow. One protestor was immediately fined $100.

Protestors were told that if they congregated outside the governor’s home, it would be viewed as “picketing” and they would be in violation of the new law. And so, on the order of the state police, protesters walked along the street instead of remaining in front of Sununu’s home.

They continued their impromptu march back up the street and around the cul-de-sac, where troopers again engaged them. Another dozen state police vehicles then rolled in, with some officers in riot-gear helmets and carrying batons. 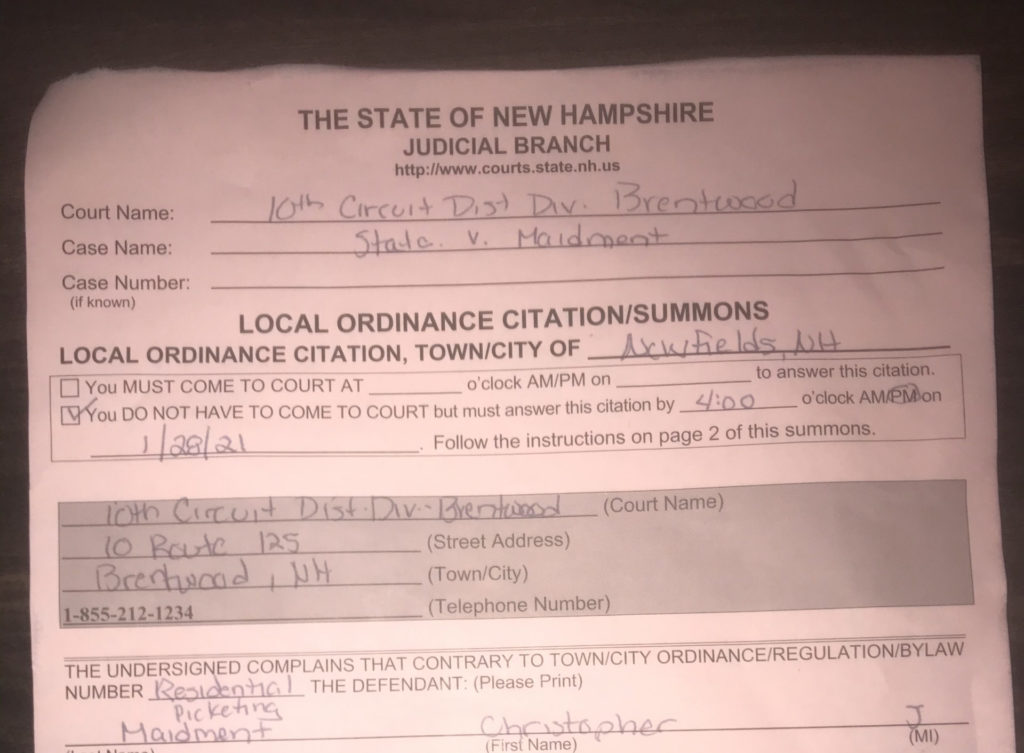 One protestor was arrested, though the charge was not immediately known. Police then fined every protestor. They also fined an NHJournal reporter covering the protest, Chris Maidment, despite the fact he was clearly displaying a media ID and repeatedly identified himself as a member of the press. Maidment was charged with “residential picketing” and ordered to pay the $100 fine by January 28, 2021.

In a statement released Monday night, Sununu’s spokesperson Ben Vihstadt said, “Governor Sununu and his family were not at home at the time of the protest. The Governor had no involvement in the ordinance brought forth by Newfields Police Chief Liebenow and passed by the Select Board, nor does the Governor have any involvement in enforcement of the ordinance. Any questions regarding the ordinance and its enforcement should be directed to the Town of Newfields.”

However, the presence of the governor’s brother on the Select Board raises questions about this claim, as does the presence of several high-level officials in Sununu’s administration at the Dec. 8 meeting when the ordinance was unveiled: Colonel Nate Noyes of the New Hampshire State Police, Commissioner Robert Quinn of the Department of Safety and Matthew Broadhead from the Attorney General’s Office. All three argued in favor of the ordinance and “respectfully requested” that the board adopt the measure.

“Our reporter was doing his job, covering a local, New Hampshire story that deals with both the current debate over COVID policy and the fundamental freedoms protected by the U.S. Constitution,” said NHJournal Managing Editor Michael Graham. “We will not be paying the fine. We will see the town of Newfields in court.”